When Napoli face Inter Milan this weekend, they will be looking to become only the second Serie A team to win their first nine games of the season since 1929/30 - Roma achieved this feat and went on to win the first ten in 2013/14.

Maurizio Sarri’s side have certainly impressed since the start of the season but their winning record stretches back to the last five games of 2016/17 - the third longest winning run in Serie A history behind Inter Milan (17 in 2006/07) and Juventus (15 in 2015/16). In fact, Napoli haven’t lost in the league since February 25.

Inter Milan, the only other unbeaten side in the league, are also enjoying a solid start to the season - the last time they had 22 points after the opening eight games was back in 2002/03. It might still be early in the season but a win for either side will be a massive edge in winning the Serie A title.

It’s safe to say that Inter Milan won’t be looking to beat Napoli by committing people forward or out-passing them. Instead, I Nerazzurri will have to contain their opponents and try to ensure the little chances they will be able to create are of high quality (and that they take advantage of them when these chances are created).

One area that Inter Milan have matched this weekend’s opponents is at the back. Luciano Spalletti’s side have conceded just five goals in eight Serie A games this season (the same as Napoli) with Skriniar and Miranda forming a stable partnership in front of Handanovic.

Sitting second in the table and three points clear of their closest rival, Inter Milan haven’t drawn plaudits for an attractive style of play this season. That said, they have consistently found a way to beat their opponents (a draw away at Bologna is the only blot on their season record so far) - something that has been missing in recent years.

Napoli will be looking to become only the second Serie A team to win their first nine games of the season since 1929/30.

Spalletti will be fully aware of the threat Napoli pose down the left-hand side (50% of Napoli’s attacking play has come from the left). Ghoulam, Hamsik and Insigne offer a blend of pace, power and technical ability that as of yet, no side in the league has been able to cope with. It’s no secret that Napoli are strong down the left, and if Inter can find a way to limit them on that side of the pitch they will certainly have a better chance of taking all three points.

Manchester City and Shakhtar Donetsk are the only sides to expose the flaws in the Napoli side this season - both away defeats in the Champions League. However, both took a very different approach. Shakhtar soaked up the pressure and hit Napoli on the counter, while Manchester City simply outplayed them for the majority of their game - I Nerazzurri will most certainly take the same approach as the former as opposed to the latter.

Napoli vs. Inter Milan: Where is the value?

Napoli posses one of the most lethal attacking forces in European soccer at the moment - only Manchester City have averaged more goals per game in the top five leagues in European soccer this season. However, as shown by Lazio last weekend, it is possible to restrict the current Serie A leaders (despite winning 1-0, Napoli produced 0 clear cut chances).

Luciano Spalletti is known for his meticulous attention to detail when it comes to tactics, as well as ensuring his teams can adapt when needed. Napoli are in free-scoring form (they’ve scored at least once in the last 20 league games) but if the Inter Milan manager gets his tactics right, the under 3 goals at 2.060* could be a value bet.

Alternatively, if you think that Napoli’s domestic dominance won’t slow down and that Inter Milan will get found out after a fairly easy start to the season then Napoli -1 at 2.060* could be the bet for you. 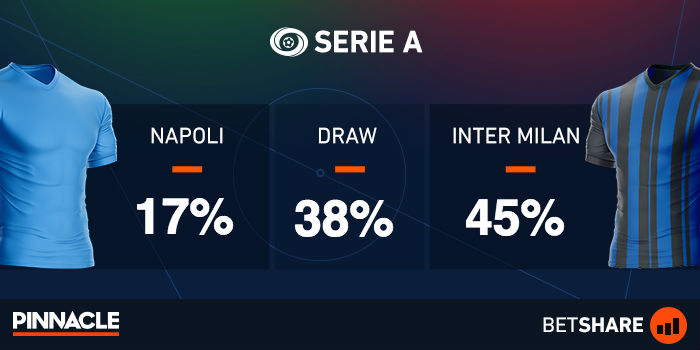