Will Juventus dominate for another year?

Despite a strong start to the season, much has been made of the fact that this could be the year Juventus’ dominant Serie A reign comes to an end. The Old Lady have won six straight league titles and six domestic cups (three Coppa Italias and three Supercoppa Italianas) in the last six years.

Fiorentina have already conceded six goals this season - the only time they have managed to keep a clean sheet was against Verona (a team that has scored one goal all season).

Roma got the closest anyone has to challenging Juventus for the title last season - the four-point gap was considerably shorter than the nine in 2015/16 and 17 in both 2014/15 and 2013/14. However, while other teams have invested and strengthened over the past few years, Juventus seem to be moving backwards.

When looking at the Juventus vs. Fiorentina betting, the focus will be on the individual game and not either side’s chances in the outright Serie A betting but bettors can still learn a lot from this match. If Juventus struggle then the other teams in the league will spot the chink in the armour; another win and the number of doubters might begin to dwindle.

Can Fiorentina reach the elite?

Fiorentina began to show the promise of a side that could ultimately challenge for the Serie A title back in 2006/07 - despite a 15-point penalty at the start of that season. The likes of Luca Toni, Sebastien Frey, Adrian Mutu and Stevan Jovetic enjoyed successful spells at The Viola, while plenty of players - notably Riccardo Montolivo, and Stefan Savic - never fulfilled their potential.

A period of no success in terms of silverware means Fiorentina have been forced to sell their biggest talents to some of their rivals in recent years - Juan Cuadrado, Adem Ljajic and Federico Bernardeschi being just a few examples.

Fiorentina’s main issue when it comes to breaking into the Serie A elite is beating other teams at the top of the table. In the 30 matches they have played against the top three sides in the table in the last five years, they have only won five (taking 22 points out of a possible 90).

After a summer of uncertainty, Juventus managed to ward off interest from Barcelona and keep hold of Paulo Dybala. In the first four games of the season, the Argentine forward has shown why he was touted as a possible replacement for Neymar with eight goals in four appearances (averaging a goal every 37.6 minutes).

Fiorentina have already conceded six goals this season - the only time they have managed to keep a clean sheet was against Verona (a team that has scored one goal all season) - so bettors looking at a potential upset should be wary of the impact an in-form Dybala could have on the result.

Juventus vs. Fiorentina betting: Where is the value?

As the Juventus vs. Fiorentina odds suggest, the away side face a real challenge in trying to come away from the Allianz Stadium with anything but a loss. Fiorentina have only won two of the last 14 league matches between the two sides - Juventus have won eight and there has been four draws between them.

Serie A matches involving Juventus have averaged four goals per game this season, while Fiorentina matches have averaged 3.5 goals - the over 2.5 & 3 goals is currently priced at 1.854* and is likely to attract betting interest. Given the Old Lady’s current league form and Fiorentina’s struggles against elite opposition in recent years (especially away from home), Juventus -1.5 at 2.12* could offer some potential value.

If bettors think the capitulation against Barcelona in the Champions League highlighted how an aging Gianluigi Buffon and missing Leonardo Bonucci (sold to AC Milan) has weakened the Juventus defence, a bet on both teams to score may well stand out at 1.961*.

Find out what has been the most popular bet in the Juventus vs. Fiorentina betting with the 1X2 BetShare below: 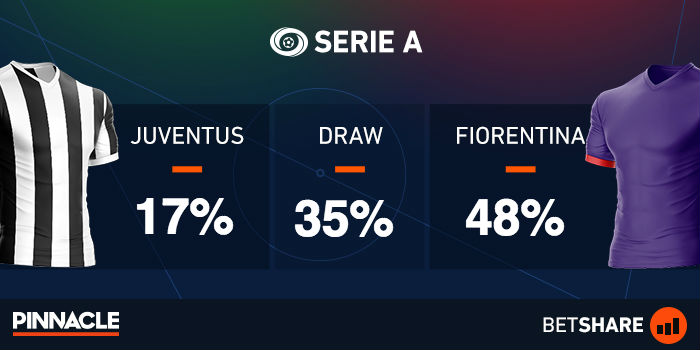 Get the best odds and highest limits for Serie A betting at Pinnacle.