Can AC Milan save their season?

Following a net spend of €166.16m this summer, AC Milan would have been hopeful of a drastic improvement on their last few Serie A campaigns at the start of this season. However, just seven games into the new season and Vincenzo Montella’s side already look like they won’t be challenging for the title.

The two sides have averaged a red card between them every two games in the last 20 meetings, sharing an average of six cards per game over the same period.

I Rossoneri have lost to Lazio, Sampdoria and Roma so far this season and another loss on Sunday would put them on four losses in eight games, effectively ending any hopes of winning the title.

AC Milan are already nine points behind league leaders Napoli and given that the Serie A title winner has only lost more than four games in a season on three occasions in the last ten years (no one has won the league with more than five losses in that period), they really can’t afford another loss this weekend.

In contrast, Inter Milan are still unbeaten with six wins and one draw - their best start to a Serie A season since 2002/03. Despite a good start, bettors should be wary of looking at the bare form as I Nerazzuri have been far from convincing in their last five fixtures (narrow wins against SPAL, Crotone, Genoa and Benevento and a draw against Bologna).

The intensity of the rivalry between Inter Milan and AC Milan means the derby games are always an intriguing contest. Both sides have been fairly evenly matched in terms of overall performance in recent years but they have developed distinctly different styles of play.

The Serie A title winner has only lost more than four games in a season on three occasions in the last ten years (no one has won the league with more than five losses in that period).

Inter Milan have become more possession-centric and look to starve the opposition of the ball as a means to win matches - something that new manager Luciano Spalletti will continue to implement. AC Milan are more direct in their approach, looking to move quickly from back to front and often leaving themselves exposed.

These contrasting styles will most likely suit Inter Milan. The longer AC Milan go without the ball, the more direct their approach will become and given that Inter’s rigid structure will be difficult to break down, they can take advantage as their opponents will need to commit more people forward to try and create spaces and force an opening.

Inter Milan vs. AC Milan: Where is the value?

The Milan derby is one game that neither side will want to lose. The two sides share the same stadium but Inter Milan are the home side so will have a greater share of tickets and therefore a slight edge when it comes to home field advantage.

I Nerazzuri have a better record when it comes to head-to-head form - Inter have won nine of the last 20 matches, AC Milan have won six and there have been five draws. However, four of those five draws have come in the last seven games. Although bettors often find it hard to predict the draw in soccer, the fact that both sides might prioritise avoiding defeat over going all out to win means the stalemate could offer potential value.

It is also worth noting that Inter have the best defence in the league this year having only conceded three goals in seven matches. AC Milan’s defence might still be a work in progress (they’ve conceded ten goals already this season), but Inter’s total of 14 goals shows they are some way behind the other elite teams in the league when it comes to attacking threat - under 2.5 and 3 goals at 1.877* is likely to be a popular choice amongst bettors.

As with most derby fixtures, bettors can expect a physical encounter. The two sides have averaged a red card between them every two games in the last 20 meetings, sharing an average of six cards per game over the same period. With advanced cards betting knowledge, bettors will be able to calculate if total cards market is a worthwhile option in the Inter Milan vs. AC Milan odds. 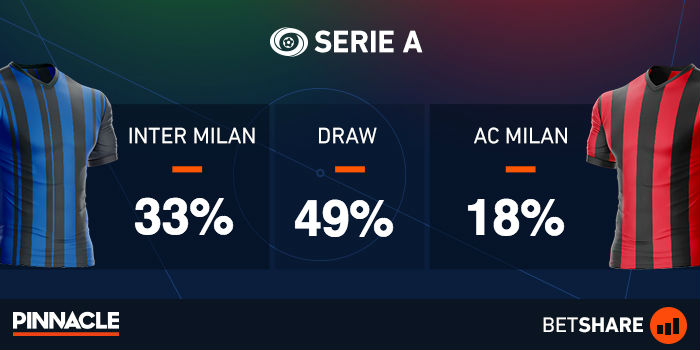