We’re now 11 games into the Serie A season and there is already a gap developing between the regular title challengers and the rest of the league. Fiorentina play Roma in this weekend’s highlight fixture with plenty to consider when it comes to Fiorentina vs. Roma betting. Where is the value in the Fiorentina vs. Roma odds? Read on to find out.

Can Roma win the title?

As is so often the case in Serie A, the elite teams begin to put some distance between themselves and others after ten games. This season, it is Napoli, Inter Milan, Juventus, Lazio and Roma that are beginning to pull away from the rest - there is already a four-point gap back to Sampdoria in sixth.

Roma have certainly dominated recent fixtures against Fiorentina - in the last 10 league meetings, Roma have won eight, drawn one and lost just once.

Roma will know how important a good start is - their ten straight wins at the start of the 2013/14 season is a Serie A record. However, they will also be aware of how important maintaining that good start is after failing to win the league in 2013/14 (finishing second, 17 points adrift of Juventus).

This year, it is the turn Napoli and Inter Milan to enjoy a great start to the season. While those two remain unbeaten, Roma have won eight and lost two of their opening ten fixtures. Two of the main problems for I Giallorossi in recent years has been converting draws into wins and winning games against their big rivals.

The early signs of this season show that Di Francesco’s men are more intent on winning games rather than settling for a draw but having already lost to both Inter Milan and Napoli, their performances in the big games could cost them once again.

When looking at basic statistics such as shots per game (SPG), it might appear that both Fiorentina (16 SPG) and Roma (16.3) are two of the most attacking sides in the league. A closer look at the quality of those shots shows that both sides are more inclined to shoot from distance (7.9 and 6.6 SPG outside of the penalty area respectively) rather than creating high-quality scoring opportunities.

Two of the main problems for I Giallorossi in recent years has been converting draws into wins and winning games against their big rivals.

In addition to the low goal tallies for either side - Fiorentina have scored 19 this season and Roma 17 - both teams’ expected goals are low in comparison to those near them in the table. Fiorentina’s expected goals, a metric that measures chance quality in terms of goal expectation output, is 15.54 this season while Roma’s is 16.37.

A more in-depth analysis of expected goals will show if these figures are comprised of a high quantity of low quality attempts or (more likely) a mixture of different quality chances. Either way, if Fiorentina want to close the gap to the elite and Roma want to keep in touch with the teams above them, both sides will need to create better scoring opportunities to help increase their goal tallies.

Fiorentina vs. Roma odds: Where is the value?

Roma have certainly dominated recent fixtures against Fiorentina - in the last 10 league meetings, Roma have won eight, drawing one and losing just once to this weekend’s opponents. Given this dominance in recent seasons and Fiorentina’s struggles against elite teams of late, Roma will likely be a popular bet ahead of this fixture.

Alternatively, if bettors are looking towards the Totals market, the lack of high-quality chances from both teams this season means the Under 3 goals odds at 1.862* could offer potential value.

This is a game that I Giallorossi simply cannot afford to lose if they are to challenge for the Serie A title this season. Fiorentina will hope to benefit from home field advantage but Stefano Pioli’s side will probably settle for the draw in the hope that they can achieve Europa League qualification this season.

This BetShare highlights the share of bet volume in the Fiorentina vs. Roma 1X2 betting market. 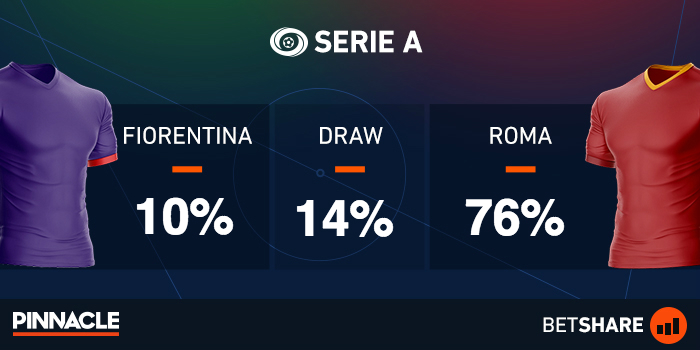