The Serie A season is only six games old but Juventus and Napoli already look like the teams to catch. Our highlight fixture for this weekend features two sides who need a win to stay within touching distance of the leaders. What do the AC Milan vs. Roma odds suggest? Read on for some expert AC Milan vs. Roma betting insight.

AC Milan vs. Roma betting: A battle of defence

Italian sides are renowned for having some of the best defences in world soccer and this often proves to be the key to winning the Serie A title - the last time the team with the best defensive record didn’t win the league was Lazio back in 2006/07 (finishing third).

Both AC Milan and Roma were fairly evenly matched in terms of their defensive performance last season (conceding 1.18 and 1 goals per game respectively). However, AC Milan seem to be lacking in this department so far this season as they are conceding at a rate of 1.33 goals per game, compared to Roma’s average of 0.8.

In addition to home field advantage, AC Milan will have the benefit of not travelling for their midweek match (although it should be noted Roma would have had an extra days rest).

One of the most important factors to consider when analysing the AC Milan vs. Roma odds is which defence will come out on top. The two sides possess plenty of attacking threat with AC Milan averaging 1.66 goals per game this season and Roma 2.4 - they are also third and second when it comes to shots per game statistics.

Bonucci, Romagnoli and Musacchio may take some time to gel and provide the sturdiness their reputation suggests. In contrast, Roma’s new centre back - Federico Fazio - seems to have immediately settled with his new defensive partner Kostas Manolas and it could be said Roma’s defence looks the stronger heading into Sunday’s match.

Those familiar with English soccer will have experienced the likes of Chelsea and Manchester City using vast amounts of money as a means to climb the league table. Both of those sides have won multiple league titles since their takeovers and now a Chinese consortium is attempting to do the same with AC Milan in Serie A.

Roma’s approach to progression is almost the complete opposite to Sunday’s opponents. Since AC Milan last won the Serie A title, they have a net transfer spend of €259.90m (€166.16m of that was spent this summer).

In comparison, Roma have a net spend of €2.59m throughout the same period. Despite spending ten times less than their rivals, I Giallorossi have finished above AC Milan in four of the six seasons within the aforementioned period.

Can either side afford a minor blip?

Two losses and a draw in Roma’s first six games last season put them five points behind Juventus before they even played each other - it proved to be a gap they couldn’t make up as they finished four points behind the Old Lady at the end of the season.

Despite spending ten times less than their rivals since 2010/11, Roma have finished above AC Milan in four of the last six seasons.

AC Milan suffered a similar fate in their first six games in 2016/17 and another blip at the turn of the year (a draw followed by three losses in a row) meant I Rossoneri were never in contention for the title. In a league where one team is so dominant, teams cannot afford any slip-ups - if either side loses on Sunday, the Serie A title may well be out of reach before the tenth game of the season.

AC Milan vs. Roma odds: Where is the value?

As the odds suggest, the AC Milan vs. Roma betting is a close one to call. Although both sides will recognise the importance of their weekend fixture, it is the Europa League and Champions League midweek games that could prove to be crucial.

I Rossoneri have what looks like a comfortable home match against Croatian side Rijeka, while Roma face a 10,000km round trip play Qarabag FK of Azerbaijan. In addition to home field advantage, AC Milan will have the benefit of not travelling for their midweek match (although it should be noted Roma would have had an extra days rest).

This is a game that neither side will want to lose so the draw will most likely appeal to a lot of bettors. It is expected to be a tight affair so under 2.5 and 3 goals at 1.925* might also be a popular choice.

Who do our bettors think will win?

The BetShare below shows the percentage share of total 1X2 bets taken at Pinnacle for AC Milan vs. Roma. 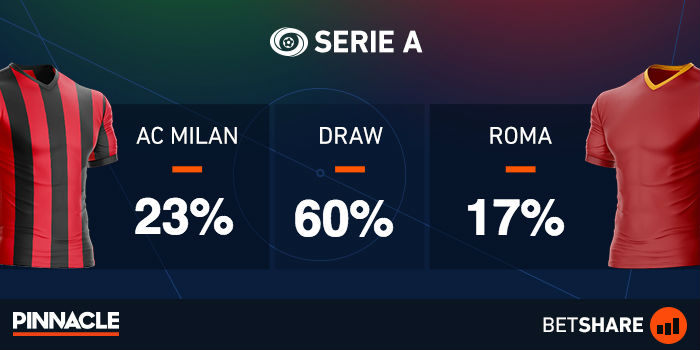