In the last La Liga weekend of the season, our highlight game sees third-placed Real Madrid host tenth-placed Real Betis. As the curtain comes down on a disappointing campaign for both sides, who will end the season on a positive note? Read on to inform your Real Madrid vs. Real Betis prediction.

A close look at the Real Madrid vs. Real Betis odds 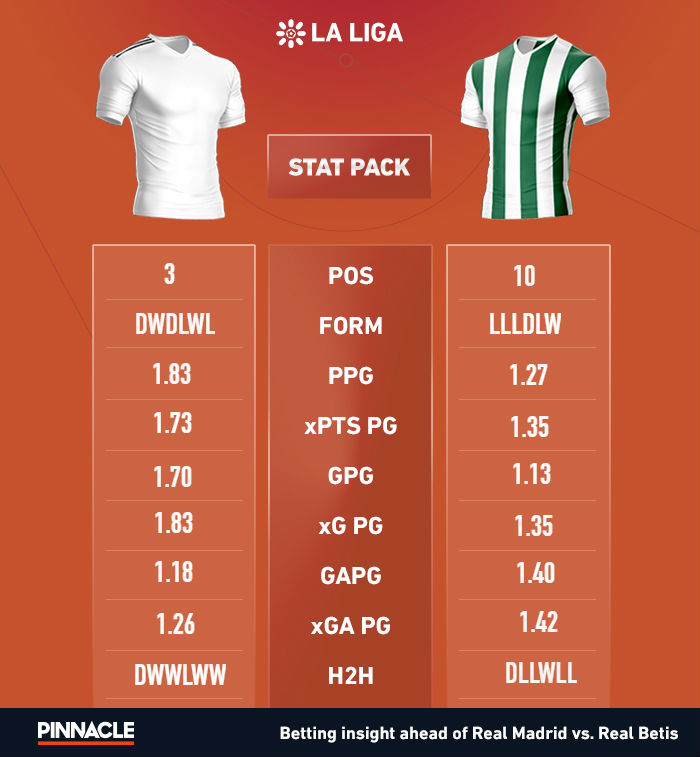 With the final set of La Liga games taking place over this weekend, it’s been a season to forget for both Real Madrid and Real Betis – with the summer break coming as a welcome relief to both sets of supporters.

For Real Madrid, the 2018/19 season has been a watershed one. This is the first year of what will surely be known as the post-Ronaldo era, as Real struggled to main any form of a serious title challenge and relinquished their three-year grip on the Champions League.

Having not won an away game since March 10, Madrid have conceded 44 goals in La Liga, and should they lose to Betis this weekend, it would take them to 18 defeats in all competitions, the joint-second worst in the club’s history

As their 17th defeat of the season in all competitions, not since 1998/99 have Los Merengues had a worse campaign, in statistical terms – with Zinedine Zidane expected to complete a major overhaul of the squad this summer.

Having not won an away game since March 10, Madrid have conceded 44 goals in La Liga, and should they lose to Betis this weekend, it would take them to 18 defeats in all competitions, the joint-second worst in the club’s history.

This season, Madrid’s top scorer Karim Benzema has 21 – but mixed form from the likes of Gareth Bale, Isco and Marco Asensio means Madrid have looked more than a tad toothless in attack.

One positive in the attack however, may be the emergence of 18-year-old Vinicius Junior, who looks a good option for the future, but can’t possibly be ever expected to fill the void left behind by Ronaldo’s summer transfer to Juventus.

Sixth on Christmas Day, Betis have won just six La Liga games since – and had the table started on December 25, they would currently be 15th and going into the final day of the season facing a relegation battle

Symbolic of their season as whole, Madrid are very mixed form at the moment – having won two, drawn two and lost two of their past six La Liga games. Scoring eight and conceding seven in the process, they sit tenth on the current form table.

For their opponents Real Betis, this season will equally be seen as a big disappointment – particularly given how strongly they started the season.

Currently sitting 10th in La Liga – Betis are in poor form, having won just one of their last six games, drawing one and losing four.

Knocked out of the Europa League in the Round of 32 by French side Rennes in late February, Betis were eliminated from the Copa del Rey by Valencia just one week later, and so have been solely confined to domestic soccer since.

Finishing sixth in La Liga last season with 60 points from their 38 games, Betis have just 47 this time around.

Not only seeing a noticeable decline in fortunes from last season, Betis have even underperformed in comparison to their pre-Christmas form.

Sixth on Christmas Day, Betis have won just six La Liga games since – and had the table started on December 25, they would currently be 15th and going into the final day of the season facing a relegation battle.

Real Madrid and Real Betis last squared off back in January, when a Dano Ceballos goal late in the game gave Madrid a 2-1 away victory.

Real Madrid vs. Real Betis: Where is the value?

With neither team having much to play for, the possibility of both squads being rotated to give fringe players a possible send-off, and the general random nature of final day fixtures – bettors can use these scenarios to potentially exploit certain markets.

For example, last season’s final day saw slightly more goals scored (2.90) than the La Liga average for that season (2.69) – with teams choosing to go all out for a win rather than sit back for a draw.

As a result, bettors could possibly be tempted with Over odds of 1.925* - especially given Betis generally often play out from the back with a fluid formation and high defensive line that leaves them susceptible to counter attacks.