Zinedine Zidane’s Real Madrid host in-form Athletic Bilbao in this week’s highlight La Liga game. Madrid are currently comfortable in third, while Bilbao are seventh and aiming to qualify for the Europa League once more after a one year absence. Looking for value in the Real Madrid vs. Athletic Bilbao odds? Read on to inform your Athletic Bilbao vs. Real Madrid prediction

A close look at the Real Madrid vs Athletic Bilbao odds* 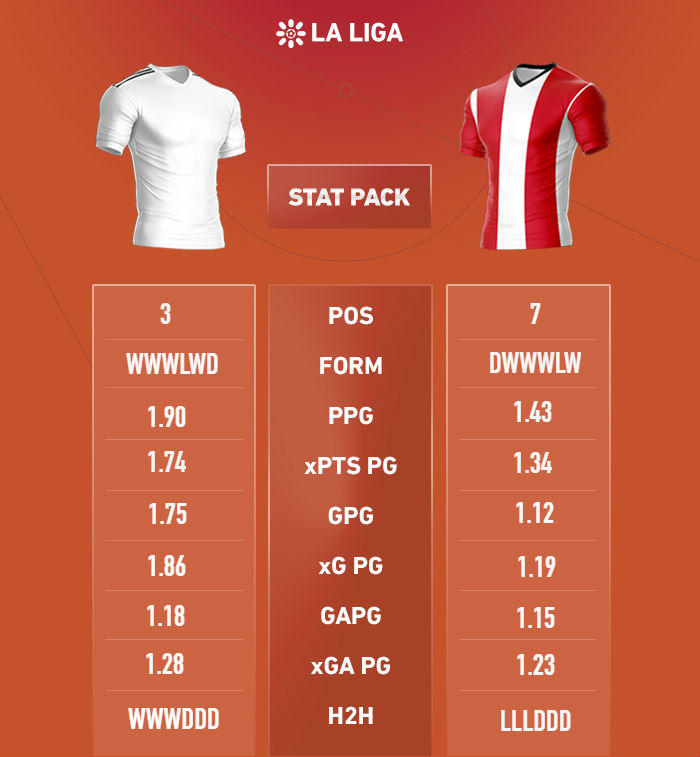 With their season having been effectively ended in February, following elimination from the Copa del Rey to Barcelona and Champions League to Ajax, Real Madrid are set to endure their first trophy-less campaign since 2014/15.

With one eye already firmly on next season, and with a massive summer clear-out expected, Real Madrid look every bit a team in transition – and in desperate need of new players.

Having failed to adequately replace Cristiano Ronaldo and with the likes of Isco, Marcelo and Gareth Bale all facing uncertain futures after very mixed campaigns, the summer transfer window can’t come quick enough for Zinedine Zidane.

Despite having little to play for however, Real are in good form – having won four of their last six La Liga games, drawing one and losing the other.

Since the appointment of Gaizka Garitano on December 4 2018, Athletic have the fourth best record of any team in La Liga

In their last game, Madrid were held to a 1-1 draw by Leganes. That was the first time Madrid had played a domestic league game on a Monday night in nearly four years – it was also the first time Leganes had ever picked up a La Liga point against them.

With late substitute Gareth Bale only making four touches in 12 minutes, and walking straight down the tunnel at the full time whistle, Madrid have been low on attacking options in recent weeks – and indeed all season.

Overly reliant on Ronaldo last season for goals, Madrid have this season turned to Karim Benzema to score the bulk of their goals – and although they are as reliant, the Frenchman is unfortunately a lot less prolific than his former Portuguese teammate.

To put Madrid’s season-long problem in front of goal into context, they current have a goals-per-game average of 1.75 – compared to 2.46 at this stage last season

Having now scored Madrid’s last five La Liga goals, Benzema has 18 goals in 32 games this season, with an expected goals (xG) total of 16.58 – a sign the World Cup winner has been finishing chances at a rate we’d expect.

To put Madrid’s season-long problem in front of goal into context, they current have a goals-per-game average of 1.75 – compared to 2.46 at this stage last season.

In stark contrast, Athletic Bilbao’s domestic campaign has been a marked improvement on last season – particularly since the appointment of youth team coach Gaizka Garitano as manager in early December.

Winning just one of their opening 14 league games, which came on the opening day of the season, Athletic were in the relegation zone when manager Eduardo Berizzo was sacked and replaced by Garitano.

Finishing last season in a disappointing sixteenth place, the 44 points they won were actually far below their expected points total.

Restricted by their own unusual transfer policy that allows them only to buy players from the Basque region, since the appointment of Garitano on December 4 2018, Athletic have the fourth best record of any team in La Liga.

Looking at recent meetings between the two sides, the last three La Liga meetings have all ended in draws – with just four goals scored in total.

While back in September, Iker Muniain and Isco were both on the scoresheet in a 1-1 draw.

In fact, you’d have to go back to March 2017 for the last time there was a winner between the two sides – with Benzema and Casemiro giving Real a 2-1 win.

With Madrid on auto-pilot in recent weeks, and longing for the end of the season, combined with Bilbao’s European ambitions - Los Leones might well fancy their chances this Sunday.

Real Madrid vs. Athletic Bilbao: Where is the value?

Given Madrid’s season-long trouble in front of goal and Bilbao’s recent form, combined with this fixture being very low scoring in recent games, bettors may be tempted by Under odds of 1.980*.