Europa League hopefuls Real Betis host league leaders Barcelona in our highlight game from La Liga. The pair last met in a seven-goal thriller back in November, which saw Betis run out as the 4-3 winners. So, is another upset on the cards? Read on to inform your Real Betis vs. Barcelona prediction.

A close look at the Real Betis vs. Barcelona odds 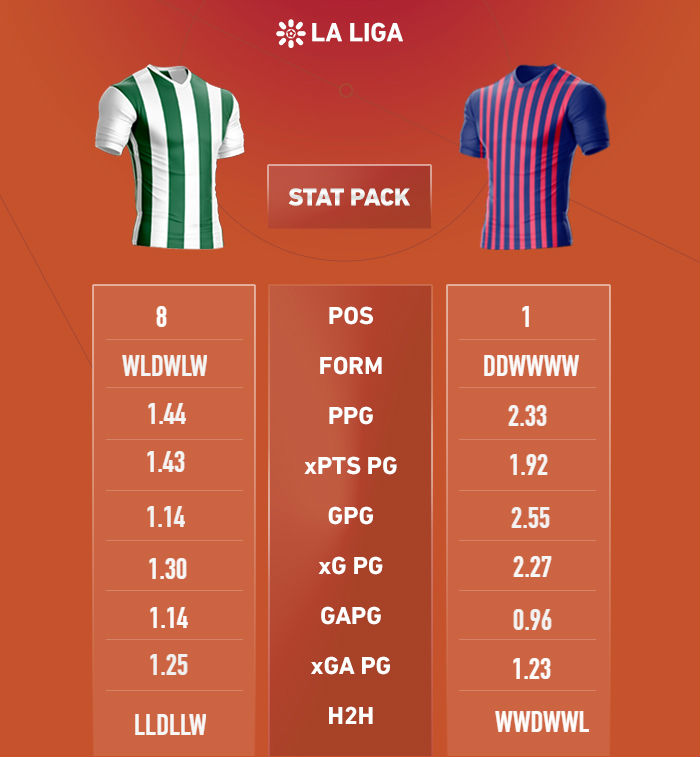 Sunday’s fixture should come too soon for right-back Antonio Barragan who was forced off at half time in Real Betis’s last home game, a 2-1 defeat to Getafe, with muscular problems. Meanwhile 22-year-old left back and Real Madrid target Junior Firpo remains absent with a muscle injury.

Should Barca come out of Wednesday night’s Champions League tie at home to Lyon unscathed, then manager Ernesto Valverde should have no fresh injury concerns to contend with – aside from long-term absentees Rafinha and Thomas Vermaelen.

With both Atletico and Real Madrid failing to sustain any sort of a serious title challenge, Barcelona come into the weekend’s game looking to, at the very least, maintain their seven point lead at the top of La Liga – with third-placed Real 12 points adrift.

A sign of how indominable Barcelona have been this season, and indeed how much weaker their challengers have been in comparison to recent years, Barca have spent just four gameweeks outside first in La Liga this season.

With half of those four gameweeks coming in the opening two weeks of the season, Barca’s lowest position all campaign has been second.

Failing to win just eight games all season from the 27 they’ve played, Barca have lost just twice – once being at home to this weekend’s opponents back in November.

In a seven-goal thriller, Real Betis won 4-3 – becoming the first team to win at Camp Nou in La Liga in two years.

High-risk yet entertaining to watch, Betis often play out from the back with a very fluid formation – with patient build up the hallmark of their system

In many ways, the game as a whole was very representative of Real Betis’ consistent style of play since the arrival of Quique Setien as manager in 2017.

High-risk yet entertaining to watch, Betis often play out from the back with a very fluid formation – with patient build up the hallmark of their system.

As a result, however, Betis often play with a very high defensive line – which can leave them vulnerable to quick counter attacks should they lose possession.

Relying on multiple sources to chip in with goals, rather than having a standalone stat striker, Sergio Canales is their highest scorer this season with six goals in 25 games – and an xG90 of 0.25.

Knocked out of the Europa League in the Round of 32 by French side Rennes in late February, Betis have only domestic duties to attend to for the rest of the season.

Currently eighth in La Liga, with 39 points from 27 games, Los Verdiblancos, as they’re also known, will be targeting European qualification once more – so they will need to improve in order to achieve a top seven finish.

Marching on to their second La Liga title in a row, Barcelona are unsurprisingly the most in-form team in La Liga at the moment

This would imply they’ll see a slight improvement in results – though at this stage of the season, recent form can be a better indicator of how a team will fare in their remaining games.

Looking at their last six league outings, Los Verdiblancos’ form has been very mixed, winning three, drawing one and losing two – scoring six and conceding six in the process.

Their last league game came in the form of a 1-0 away win at Celta Vigo thanks to a late goal from on-loan ParisSaint-Germain striker Jese.

One positive for Betis this season has been the performance of 22-year-old midfielder Giovani Lo Celso, who’s been averaging a goal or assist every two matches – with an xG90 of 0.29.

Also on loan from Paris Saint-Germain, Betis have an option to buy the player at the end of the season.

Marching on to their second La Liga title in a row, Barcelona are unsurprisingly the most in-form team in La Liga at the moment, winning four and drawing two of their last games - scoring 11 goals and conceding five times in the process.

Holding the two best strikers in Spain in the form of Lionel Messi and Luis Suarez, Argentinian Messi has 26 goals and 12 assists in 25 games, with an xG90 of 0.88.

Real Betis vs. Barcelona: Where is the value?

When comparing both historical data and recent form, it’s not hard to see why Barcelona are strongly tipped as favourites for Sunday’s game.

Given the attacking-heavy playing style of both teams, bettors should also consider Over odds of 1.869*.