The countdown to the 2019/20 Premier League season is almost over. There are numerous outright markets to assess before the action gets underway, but what’s the best way to find value in these season-long markets? Read on to find out.

Soccer is the most popular sports to bet on at Pinnacle. While the 1X2, Handicap and Over/Under markets will take the majority of the volume, plenty of bettors will look to the Premier League outrights as a source of potential value. This article examines how using data can help inform your predictions in these season-long markets.

Unlike the 1X2, Handicap and Over/Under markets, which are settled within 90 minutes or fewer, Premier League outrights can take over nine months and 380 individual games to be decided. The swings within a 90-minute match might feel more extreme, but there are so many fluctuations throughout a season or competition.

Some bettors will advise against betting on outright markets due to opportunity cost (it’s an easy way to tie up bankroll that could be used throughout the season). However, it should also be remembered that it is only ever worth investing your bankroll if you can find positive expected value.

If you have a legitimate edge that can be bet on a week-by-week basis then it will be more beneficial to avoid the season-long markets as this will help maximise your edge. If, however, you’re able to find value in outright markets (and not individual matches) then your bankroll will be better spent on these types of bets.

One of the benefits of having to wait longer for your bet to be settled is the increased likelihood of hedging opportunities. So much can happen over the course of a Premier League season and with markets often reopened and repriced, it gives bettors the chance to cover other outcomes to guarantee a profit. While these opportunities may also arise in a single game, timing the hedge correctly can be difficult.

How to use xG for Premier League outrights

The most popular outright markets in the Premier League are the title winner, team to be relegated, top goal scorer and individual team total season points. If bettors are looking into these markets, using a metric like expected goals is much more likely to produce a profitable return than alternative options (goals, shots and form being just a few examples).

Southampton and Bournemouth feature highly in the list of teams that were unfortunate enough to not finish with a higher points tally based on their expected numbers.

Given that bets on the 2019/20 Premier League outrights will be placed before a ball is kicked this season, the only real data bettors have at their disposal is that from last season or before (except for a few pre-season games that are played with below-strength squads and often lack a competitive edge).

The most natural place to look when trying to predict the Premier League table (who is at the top, the bottom or how many points a team will get) or who will score the most goals is the final league table or goal scorer standings from the previous season. However, even over the course of a 38-game season, this data can be heavily influenced by luck.

Expected goals gives a much clearer indication of underlying performance compared to the final points total or goal tally for each team. Therefore, comparing xG figures from last year against actual performance can help bettors gauge who underperformed or overperformed, and who is likely to regress.

The fact that Wolves finished 7th in the Premier League in 2018/19 might have been a surprise to some - but when you consider they had a record-breaking year in terms of xG in The Championship the season before, a top half finish would have been expected.

What can xG tell us about the 2019/20 Premier League season?

Expected goals can be used on an individual match basis to show which team deserved to win the match (based on underlying numbers), as well as the probability of certain outcomes for that match. We can then use these figures to calculate expected points from each match, which can be used to create a league table. 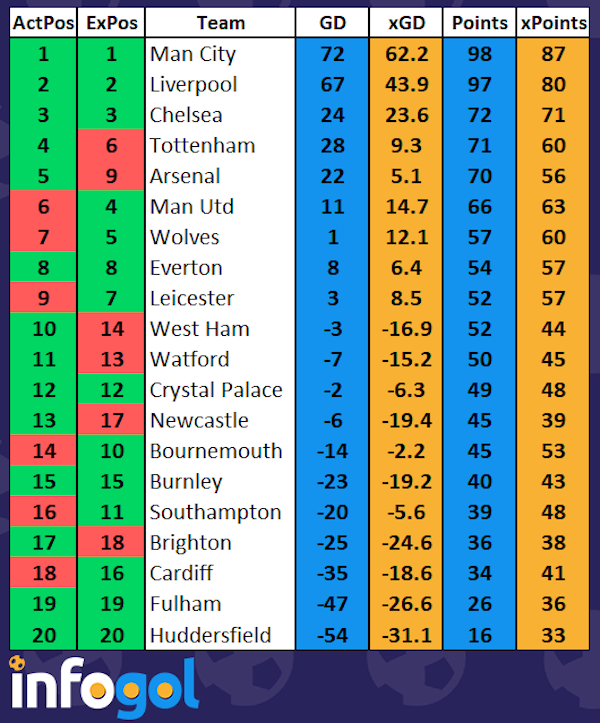 It’s clear to see that while the final league table had Manchester City and Liverpool separated by just one point, the gap between the two should have actually quite a bit more.

At the other end of the table, Newcastle and West Ham were perhaps the benefactors of some good luck when it comes to their final league position. Anyone looking at West Ham to get more than 46.5 points next season (odds of 1.50*) should also take note of their 10-game rolling xG average from last season. 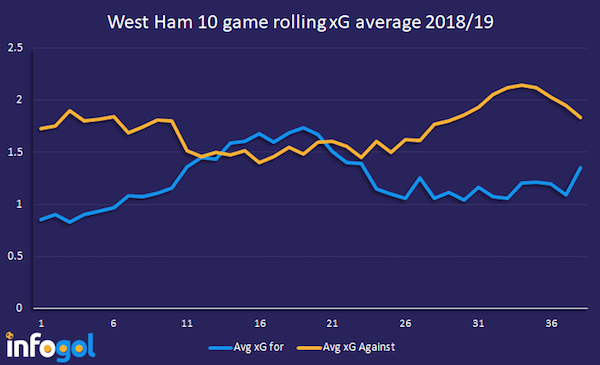 This shows that West Ham’s attacking output dropped off considerably, while they also struggled defensively towards the end of the season (something that may not bode well for the upcoming campaign). However, given the struggles are more extreme for the final 10 games, it is also worth noting that Manuel Pellegrini’s side had already secured safety and had nothing left to play for which could have played a part.

Southampton and Bournemouth feature highly in the list of teams that were unfortunate enough to not finish with a higher points tally based on their expected numbers. It could also be said that Cardiff were a little unlucky to get relegated.

In terms of goal scorers, despite there being a three-way tie between Mohammed Salah, Sadio Mane and Pierre-Ermerick Aubamayang, it was the Arsenal striker who was the clear winner in terms of xG. Given Aubamayang’s consistent xG output over the past four season in the Premier League and Bundesliga, he looks like a solid contender for the 2019/20 Premier League golden boot.

How to use a model to help with your predictions

Of course, using last season’s xG data alone for analysis will only really tell us what might happen in 2019/20 if we were to have an exact repeat of last season and all instances of good and bad luck were removed. While this might be fair, it is very unrealistic. If we want to take a probabilistic approach to predicting the Premier League table for next season, we’ll have to use a model.

A simple Poisson distribution is great for using inputs to predict the outcome of a single match; be it the result or even the correct score. However, given the complex nature of predicting 20 league positions over a 380-game season, we can build on this method to calculate probability distributions for what the league table might look like at the end of May 2020 by using Monte Carlo simulations.

Expected goals data from last season can be used to determine the strength ratios for each team. As the article above explains, we can then use these values to calculate the likelihood of outcomes for each of the 380 games for next season. With the help of Excel, this process can then be repeated 10,000 times to produce an average expected points tally for each team which gives us a final predicted Premier League table.

Note: For the purposes of this article, I used data from the relegated teams for those arriving from The Championship. To produce a more accurate prediction, this data should be weighted against the promoted teams’ performance compared to previous seasons.

It is important to note that given this simulation is based on last year’s data, it doesn’t include any recent transfers or managerial changes. One team that jump out in this respect is third-placed Chelsea who can’t make transfers and have a new, inexperienced manager.

While it is still very unlikely that the final Premier League table for the 2019/20 season will look like the one provided above, this article should encourage bettors to use expected goals when trying to make long-term soccer predictions.