Over the past nine months, Chelsea saw off all their Premier League rivals to lift the title, Arsenal won the FA Cup and Manchester United pulled off an unlikely double. One thing that hasn’t been decided is the winner of the Bookmaker vs. Soccer Pundit challenge, until now. Who is better in terms of predicting results, Pinnacle or Mark Lawrenson? Read on to find out.

Since the start of the Premier League season, we haven been converting Pinnacle’s handicap odds into a match prediction and compared them against the weekly predictions made by BBC soccer “expert” Mark Lawrenson. We have also placed a hypothetical €10 bet on each of these selections to see whose predictions would make the most money.

At the end of part seven of the challenge, Pinnacle had got 201 of its 334 predictions correct with Lawrenson just behind on 189/334. However, using the €10 bet and converting the selections into betting predictions meant Lawrenson would have made €570.89 compared to Pinnacle’s €339.34.

Neither Pinnacle nor Mark Lawrenson started the final part of the Bookmaker vs. Soccer Pundit challenge on the right foot. A below par 4/10 meant Pinnacle suffered a €24.55 loss, while the worst score in the challenge to date (2/10) resulted in a €65.05 loss for the BBC pundit. 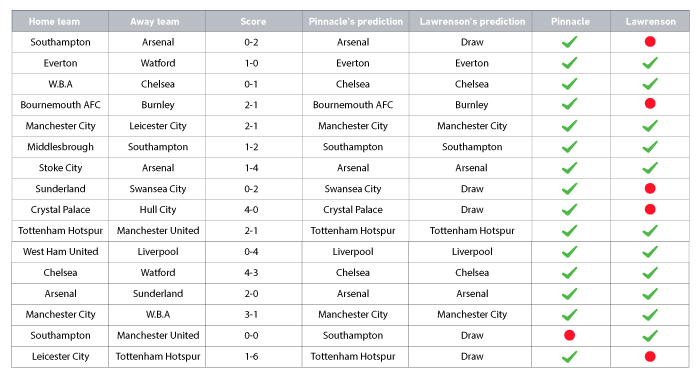 Week 37 was used to level up the number of games played in the Premier League before the final round of fixtures. It was also a crucial week in the Bookmaker vs. Soccer Pundit challenge as a poor week for Pinnacle and the talking head could close the gap in terms of the number of correct predictions, a good week for Pinnacle and Lawrenson’s betting predictions lead would be cut.

The bookmaker got the closest to a perfect round we’ve seen so far in the challenge with a score of 15/16. Lawrenson continued to predict the draw but with the majority of favourites winning, he only managed 11/16. Heading into the final week, Pinnacle secured a €89.33 profit compared to Lawrenson’s €20.27.

After being so closely matched throughout the 37 weeks and 370 predictions prior to the final week in the Bookmaker vs. Soccer Pundit challenge, it is perhaps fitting that both Pinnacle and Mark Lawrenson scored 7/10. Despite being matched by the number of correct predictions, the BBC “expert” made €39.27 and the bookmaker just €7.47.

After a gruelling 38 weeks and 380 predictions each, the Bookmaker vs. Soccer Pundit challenge has reached its finale. Although a clear pattern of Pinnacle’s consistency and Lawrenson’s draw selection emerged fairly early on, the winner of the challenge was never really certain until the very end. The final scores are below:

It would be expected that Pinnacle’s Handicap odds are more efficient in terms of predicting results compared to a talking head. However, the fact that a €10 hypothetical bet on each of Mark Lawrenson’s selections has returned a profit over the course of the Premier League season (and beat Pinnacle’s betting predictions) is certainly interesting to note.

Would Lawrenson’s positive results continue with a larger sample size? Is there anyone out there who can beat Pinnacle’s score of 231/380 predictions? Maybe we’ll find out next season.

You can read about the Bookmaker vs. Soccer Pundit Challenge from start to finish by reading part one of the challenge.