A close look at the Newcastle vs. Liverpool odds

The away side are the heavy favourites heading into the fixture with the odds suggesting they have around a 75% chance of claiming all three points. The betting market is also expecting goals with Over 2.5 and 3 Goals currently priced at 1.892*.

Miguel Almiron has a hamstring injury which means he will miss the rest of the season.

Liverpool have a nearly full-strength squad to choose from. 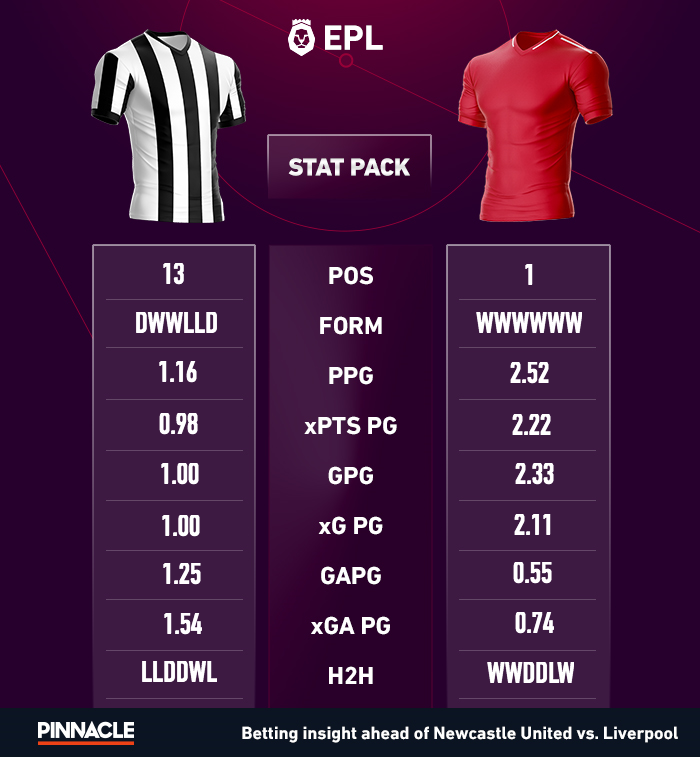 Inform your Newcastle vs. Liverpool prediction

Newcastle manager Rafa Benitez has vowed that his side are determined to upset the odds against his former club Liverpool despite the talk of the Spaniard potentially allowing the Reds a straightforward victory. Benitez's team currently sit in 13th place in the Premier League after a 1-1 draw against Brighton at the weekend, and a late Saturday kick-off time could potentially make the match an interesting one for bettors due to home advantage.

Newcastle have come more into form in the second half of the season and it is evident that when Benitez can field a full-strength side that they can be a threat to anyone. For a second successive season, their form has improved as the season has progressed, having been as low as 18th back in January.

The Magpies have now won four points from their last two Premier League away games (W1 D1), one more than they managed in their previous eight games combined (W0 D3 L5), so they will come into the fixture with Liverpool in good form and carrying confidence that they can get a result.

One of the best characteristics to Newcastle’s game this season has been their ability to counter-attack, with speedy strikers like Christian Atsu, Ayoze Perez, and Miguel Almiron coming into life when possession is recovered, and this could be key to them finding the net on Saturday against Liverpool.

"Jurgen Klopp’s side have taken 94 points from their last 38 league games, with a goal difference of +67"

Title-chasing Liverpool come into the fixture with Newcastle off the back of thrashing relegated Huddersfield. The Reds’ title destiny may be out of their hands, but they continue to perform at an extremely high level, and look capable of scoring freely regardless of the opposition.

Jurgen Klopp’s side have taken 94 points from their last 38 league games, with a goal difference of +67 which is a new club record for them in the Premier League era, and regardless of the result in the Premier League title chase, they will finish the 2018/19 season with the highest points-per-game average in their top flight history, which demonstrates the level they have been performing at this season.

The Pinnacle odds calculate that the Reds now have only around a 15% chance of lifting the Premier League trophy due to Manchester City’s superb form. However, with the Merseyside club needing Pep Guardiola’s side to slip up from now until the end of the season, bettors can expect the Reds to continue their all firing, impressive attacking play.

Newcastle vs. Liverpool betting: Where is the value?

Newcastle are currently at odds of 9.510* to beat Liverpool in this game, giving them just a 10% chance of winning, and even with home advantage, it does seems extremely unlikely that the Magpies will capture all three points – so odds of 1.362 on Liverpool has to be the value pick for bettors despite the short odds.

Newcastle do have quality in their ranks in the shape of the in-form Ayoze Perez and Salomón Rondón, so if Rafa Benitez can get his sides work rate and intensity going, on a late Saturday kick-off, with a buyout home crowd, they can give Liverpool some problems, making odds of 1.828 on Newcastle – Totals Over 0.5 potentially of interest to bettors.

A bet which could also offer greater value is the Newcastle +2 handicap at 1.478. The host’s style of play in the way that Benitez will set up could be well suited to frustrating Liverpool, who will also undoubtedly have nerves of their own as they bid to win their first ever Premier League title. Newcastle have covered their handicap in around 70% of home Premier League matches during the season and this could potentially be a value bet.

Throughout the Premier League season, you can find value in corners betting, betting on cards or use an expected goals model to inform your betting.