With the upcoming Premier League season upon us, bettors will be analysing individual teams’ chances of success. There could be potential value betting on Newcastle United, a team that might be underestimated upon their return to the top flight. Read on to find out more.

As detailed in the article how to bet on newly promoted teams, there is a stigma associated with teams coming from the league below, albeit a correct one. The disparity between the Championship and the Premier League - shown by the number of newly promoted teams that are relegated in their first season - doesn't seem to be changing.

However, there are examples where the so-called smaller teams can form a strong and stable foundation. The likes of Bournemouth are a popular example of a team who are now established, despite not having the wealth of those around them - they outperformed the expectation of the handicap market 52.50% of the time last season.

Newcastle are different. With the size of their club, both economically and within their fan-base, they should be a consistent Premier League figure. Newcastle’s successful history underpins how the club has underachieved in the last decade.

A few seasons of yo-yo-ing between the heights of 3rd to the lows of 14th from 2002 to 2007 pointed to a future of uncertainty and unbalance; particularly for a club who challenged for the title in the nineties. Their greatest fears were realised as Newcastle United were relegated in the 2008-09 season.

Twenty-eight percent (24) of Newcastle's goals came from either a free kick, penalty or corner last season.

After being promoted back to the Premier League and relegated to the Championship for a second time, the Magpies have once again bounced back at the first time of asking. Newcastle’s odds could potentially offer value, particularly in the handicap betting. But there are important factors to consider when analysing Newcastle’s odds.

Newcastle betting: What do we learn from shots per game?

Often newly promoted teams struggle to score as often as they did in the Championship. As oppositions get stronger, their number of shots dwindles making it less likely to score.

On average, since the 2014/15 season newly promoted teams will take 2.63 fewer shots per game in the Premier League than their previous season in the Championship. If we use this average against Newcastle’s shooting record during their Championship triumph last season (15.3), we should expect them to have an estimated 12.67 shots per game this season.

If we then compare this shooting record to previous newly promoted teams by using a linear comparison (excluding QPR in 2014/15 as an anomaly: they had 14.08 shots per game in the Premier League yet finished 20th due to conceding 73 goals), we can estimate where we may expect Newcastle to finish in the Premier League this season: 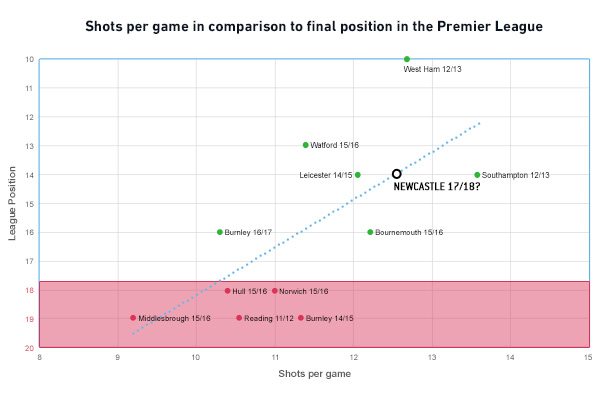 This linear comparison predicts that Newcastle will finish 14th and well out of relegation trouble. If we did the same with fellow newly promoted teams Brighton and Huddersfield, the table predicts them to both finish 17th and teetering on the brink of another season in the EFL Championship. This is just one factor to take into consideration when assessing any discrepancies in Newcastle’s odds next season.

Newcastle odds: Why a striker is crucial to success

Whilst shots might be useful to analyse, they are redundant without converting them. Generating shooting chances rely on a creative spark within the team to carve out opportunities in a game, whereas goals rely on an attacker’s ability to consistently take those chances created.

The below graph shows a comparison of past attackers goalscoring rate in their first season in the Premier League after being promoted from the Championship: 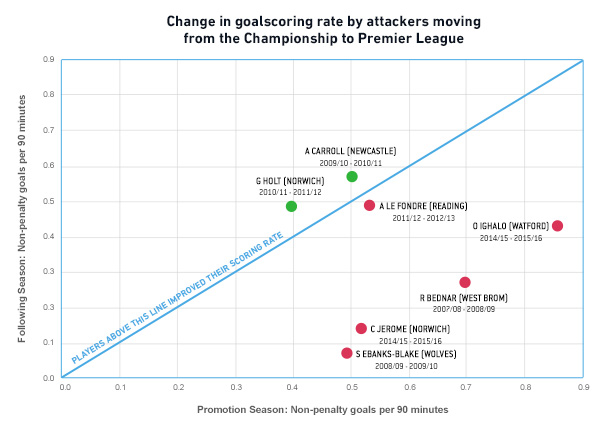 Once again the trend is apparent: goals scored by attackers in their first Premier League season is usually lower than the season before in the Championship. It is important to take this into account when looking at Newcastle’s odds in the Premier League.

It is no surprise that those strikers who fared much worse in the Premier League than in the Championship (Cameron Jerome for example) were relegated with their team, as their major supply of goals underperformed.

With this in mind, in a league where the newly promoted teams will most likely have fewer shots per game a strike force with consistent shots converted percentages is critical.

Matt Ritchie, Jonjo Shelvey and Mohamed Diame are just a few names that have amassed over 30 Premier League appearances and could aid those new to the pace of the league to adapt.

Dwight Gayle was Newcastle’s top goalscorer and second in the race for the Championship golden boot, and his 23 goals last season were pivotal in the Magpies title win. His goals per game ratio in the league was 0.7 (only bettered by Ighalo in the table above), which could point to a strong goal tally even if his goals per game ratio drops slightly.

What was however even more impressive was his shots to goals ratio. It took him just 3.8 shots to notch each goal, a better record than some of the main contenders in this year’s Premier League Golden Boot betting - Harry Kane (3.8), Romelu Lukaku (4.4) and Sergio Aguero (7).

This is not a one-off season for the forward, as his average shots to goals ratio (including seasons accumulating to more than 800 minutes of play) stands at a respectable 4.6. If we compare his past records to past newly promoted team’s top scorers, we see that Gayle’s clinical nature may be the difference between battling to stay in the Premier League and mid-table security:

A clinical striker along with a team that should produce a consistent number of shots per game could be important for finding Newcastle betting opportunities. However, it can be argued that Dwight Gayle has never been the first choice striker in a Premier League season. Can he perform throughout the season on a regular basis like he did in the Championship? His consistency could be something to consider when looking at Newcastle’s odds.

Newcastle odds: Should a youthful defence cause concern?

Rafa Benitez has revamped the ageing centre-back partnership of Fabricio Coloccini (35) and Steven Taylor (31) and brought in two younger defenders as consistent starters in Jamaal Lascelles (23) and Ciaran Clark (27). Whilst many would look for their centre back partnership to have more experience, age does not always bring maturity.

Necastle's style could be compared to WBA, a side that finished a respectable 10th - covering the handicap spread 60.50% of the time (the highest in the Premier League).

Last season Newcastle only allowed 9.7 shots on their goal per game, the league’s second best. They only conceded 40 goals across the Championship season, the joint best in the league, and this defensive solidity will be critical if they look to be successful next season.

When their goals scored is expected to shrink, a clean sheet may be the difference between one and three points in the Premier League. The question is can this more youthful yet inexperienced defence produce similar combative performances in the Premier League? Something to consider when looking at Newcastle’s odds.

Newcastle only amassed an average of 53% possession per game; not a huge number for champions. Whilst many may think this points to a lack of quality in their ranks which will struggle in a more possession based league, it could point to a playing style purposely created in preparation for a return to the top flight.

The likelihood is that Newcastle will find themselves without the ball more often than not. However, their playing style throughout their Championship triumph was not of one reliant on fluid football. They may, therefore, be prepared for a season with little possession and have proven that they can still create chances.

Their strengths lie in set pieces. Twenty-eight percent (24) of their goals came from either a free kick, penalty or corner. With Jonjo Shelvey and Matt Ritchie in their lineup, the Magpies have a consistent supply of quality crosses, and when in range can have a shot themselves. Expect a big supply of their goal tally coming from crosses and set pieces this season.

Newcastle betting: Strength in depth could be crucial

Whilst Newcastle’s first team may not look as strong as those in the middle of the table, what Newcastle do possess is the ability to rotate. The likes of Ayoze Perez, Aleksander Mitrovic and Isaac Hayden can all offer varying options from the bench than what is available in their starting lineup.

On average, since the 2014/15 season newly promoted teams will take 2.63 fewer shots per game in the Premier League than their previous season in the Championship.

Not only is their strength in their numbers, but there is Premier League experience in the side that could prove critical. Matt Ritchie, Jonjo Shelvey and Mohamed Diame are just a few names that have amassed over 30 Premier League appearances and could aid those new to the pace of the league to adapt.

The likes of Huddersfield and Brighton – who the majority of their players have never played in England’s top flight – may find it difficult to shift to the Premier League’s style of play.

Rafa Benitez: Why the manager is important

The FA Cup, 2 times UEFA Cup and Champions League winner will be on new ground with his Newcastle side, yet how he adapted to the Championship this season should not be overlooked and points to an ability to adapt to the challenge of next season.

His efforts to keep them in the Premier League during the end of the 15/16 Premier League season was admirable despite unsuccessful and should help him to comprehend the fight for survival if Newcastle find themselves in a similar position come March.

Can Rafa Benitez rally his side to a successful season after so many years of hardship for the Magpies? If so, value should be available within the Newcastle odds for the upcoming Premier League season.

Think Newcastle will get more than 38.5 points this season? They are currently 1.657* to do just that.

If you think Newcastle haven't got what it takes to stay in the Premier League, they are currently priced at 4.750* to get relegated in Pinnacle's Premier League relegation odds.