Napoli come into the match as marginal favourites (around a 39% chance) against a Inter Milan side that is unbeaten in their last seven Serie A games. The Over/Under market odds marginally suggest it will be a high-scoring contest, with over 2.5 and 3 currently priced at 1.917*.

Amadou Diawara, Vlad Chriches, Nikola Maksimovic, and Adam Ounas all miss out through injury, while there could be recalls for Dries Mertens and Lorenzo Insignie who weren’t involved last time out against SPAL. Elseid Hysaj, Faouzi Goulham, and Amin Younes will be pushing to start ahead of Malcuit, Rui, and Verdi.

Stefan de Vrij and Sime Vrsaljko miss out through injury, leaving Spaletti with almost a fully-fit squad at his disposal. Roberto Gagliardini and Lautaro Martinez will both be looking to feature from the start, with Joao Mario and Keita Balde also pushing for starting spot. 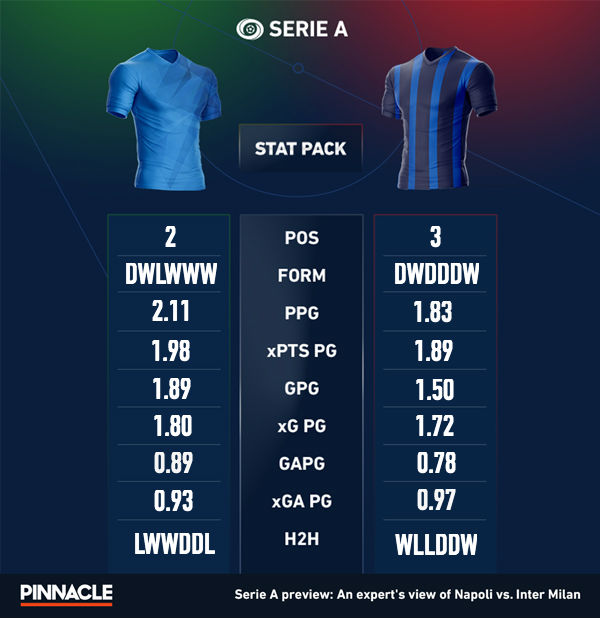 Inter Milan have the chance to secure Champions League football as they take on league runners-up Napoli, who themselves have nothing left to play for other than pride.

With four points separating third-placed Inter from AC Milan and Roma in fifth and sixth with two games left, Inter know a win will guarantee them a top four finish – even a draw could do so depending on the results of the Rossoneri and Giallorossi games.

Napoli meanwhile find themselves, as they have for most of the season, ‘stuck’ in second place – too far from Juventus above them but still far enough away from Inter below them.

Inter eased the pressure from Atalanta below them with a comfortable 2-0 victory over Chievo on Monday, to send them back into third place to extend their unbeaten run to seven matches, and end their run of three straight draws.

Inter will have their defence to thank if they secure a top three or four position this season, as their underperformance in front of goal this term is the second worst in Serie A, scoring seven goals fewer than forecasted - only bottom of the table Chievo underperformed worse, by 10 goals.

Conceding just 28 goals this term, Inter have the second-best defensive record in Serie A thus far – only Juventus (27) have let in fewer.

Despite finishing runners-up for the second successive season, Napoli will feel they have a had a disappointing campaign, having never really mounted a serious threat to runaway leaders Juventus, and finding themselves 13 points off the lead at 76 points - nine points worse off than they were at this stage last year.

Like Juventus above them, Napoli have outperformed both their attacking and defensive xG and xGA this season, as well as their xPTS – just not to the same extent as Juventus who achieved a mammoth 19 more points than forecasted, compared to Napoli achieving just four more than predicted.

With the pressure off the hosts in what is essentially a dead rubber for them, Napoli could lack the impetus to secure a result. However, home field advantage, club rivalry and the chance to potentially deny one their title rivals a place in next season’s Champions League could serve as boosting factor for the Partenopei to beat Inter on Sunday.

Inter meanwhile will hope they can address their attacking woes on Sunday and secure at least a draw heading into the final game of the season next weekend, as a loss against Napoli could open the trap door to a disastrous sixth-placed finish.

Napoli vs. Inter Milan: Where is the value?

Recent history suggests this fixture is usually a tight affair, with under 2.5 goals in four of the last five meetings between the two sides and bettors can get Under 2.25 at 2.220*.

With Napoli missing key defenders through injury alongside Inter’s desire to win the game on Sunday, bettors could back the away side to improve on their attacking performances and score at least twice, with Over 1.5 Inter goals on the Totals market currently priced at 2.300*.