A close look at the Manchester United vs. Chelsea odds

The away side are the slight favourites heading into the fixture with the odds suggesting they have around a 35% chance of claiming all three points. The betting market is also expecting goals with Over 2.5 Goals currently priced at 1.892*.

Defenders Antonio Valencia and Eric Bailly will remain sidelined and will not feature.

Callum Hudson-Odoi will miss out after picking up a serious injury in midweek.

The Blues are also struggling defensively with Antonio Rudiger and Marcos Alonso sidelined by injury. 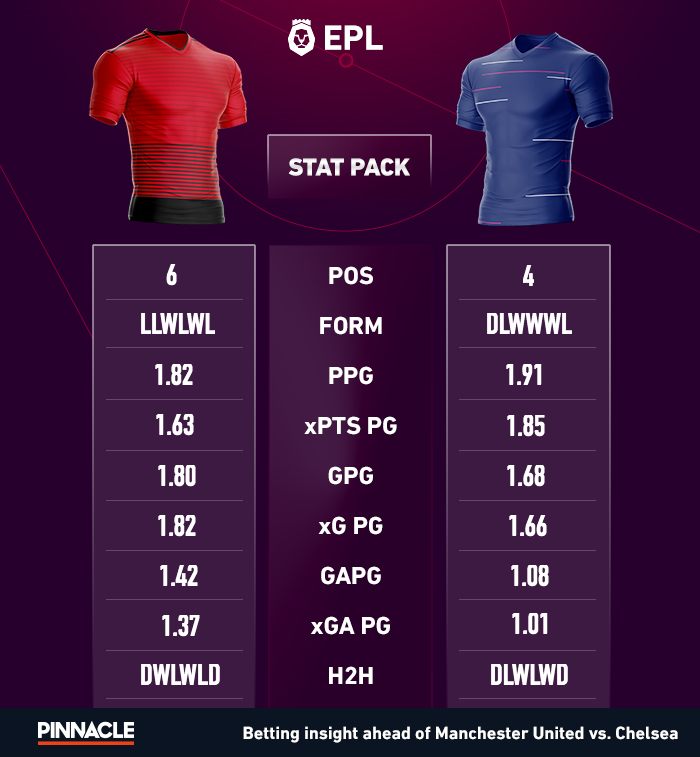 Ole Gunnar Solskjaer knows this is a huge match for him, and his side will need a response after watching his team get heavily beaten by Everton on Sunday, and lose comfortably in the Manchester derby in midweek. His side should have all the motivation they need with a Champions League spot still firmly up for grabs.

"The Reds have a PPG (points per game) average of 2.03 with home advantage and have only suffered one defeat at Old Trafford in the Premier League this season"

Despite the recent disappointing results, performances from the Manchester club have not been as bad as the form would suggest in the last five games  before the clash with Manchester City according to xG, averaging 2.01 xGF and 1.61 xGA. So while there is obvious disappointment of late around the club, the concern should not be as big as the recent results would suggest.

Chelsea come into the match with Manchester United off the back of a surprising draw at home to Burnley. The Blues scored twice, and had 76% percent of the possession, but had to settle for a disappointing point, which dented their hopes of a top four finish

The London club do have hope for optimism though, as they have been the third best team in the league this season according to expected goals, with averages of 1.67 xGF and 1.07 xGA, which shows that they create good chances regularly, but are also suspect defensively.

Manchester United vs. Chelsea betting: Where is the value?

Where bettors see value in this fixture is likely related to how they currently view Manchester United in the Premier League when presented with home advantage. The Reds have a PPG (points per game) average of 2.03 with home advantage and have only suffered two defeats at Old Trafford in the Premier League this season, so odds of 1.961* on the 0 Handicap could be of interest to bettors.

On form and statistics, this fixture point to a high scoring one. Both sides have high xGF and xGA and it would take a complete change of philosophy in playing style to prevent bettors seeing goals in this fixture, meaning odds of 1.892 on Over 2.5 Goals looks potentially a value bet.

It is also worth noting that between the two sides they have accumulated a total of 114 cards this season in the Premier League in 35 matches – an average of over 3 per game – so if bettors are looking for other alternative markets then cards betting is one to consider.