A close look at the Manchester City vs. Tottenham odds

The home side are the favourites heading into the fixture with the odds suggesting they have around a 75% chance of winning. The betting market is also expecting goals with the Over 3 and 3.5 goals currently priced at 1.952*.

Oleksandr Zinchenko remains a doubt after a hamstring problem has ruled him out in recent weeks.

Moussa Sissoko will be unavailable after he suffered an injury at the Etihad on Wednesday.

Harry Winks could remain sidelined after suffering a groin injury.

Harry Kane will likely miss the rest of the season with an ankle injury. 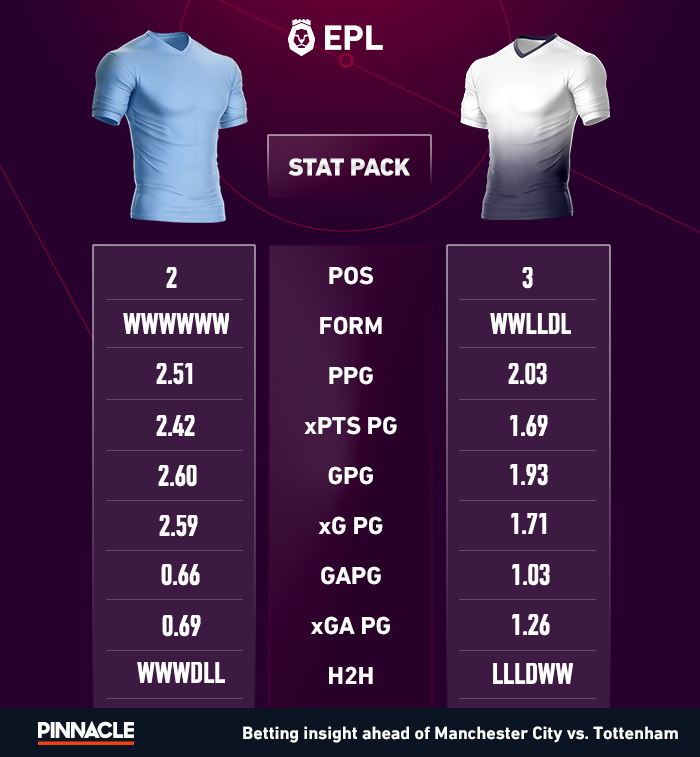 Manchester City have won their last nine Premier League matches heading into the fixture against Tottenham, and they have been dominant in all nine, averaging 2.56 xGF and just 0.69 xGA per game which is extremely impressive numbers.

Pep Guardiola’s side have also kept six clean sheets in the process, and have demonstrated how much better defensively they have become in recent weeks, so the statistics suggest City should be the dominant side in this fixture.

While Tottenham are a very good side, it is possible that City could win the match resoundingly, especially if they perform to the levels they have shown since the start of the year. Every match is a must win for Pep Guardiola’s side in the Premier League now with Liverpool performing at such a high level so consistently, which means bettors can expect a City side who are going all out for three points on Saturday.

Tottenham travel to Manchester City off the back of a convincing home win against Huddersfield Town and will be looking to gain a positive result themselves to maintain their chances of a top four finish and qualification into the Champions League next season.

Mauricio Pochettino has injury concerns which will certainly hand Manchester City an advantage, whilst Spurs have failed to keep a clean sheet in their last six visits to the Etihad, and no team has been able to prevent City from scoring at home this season in all competitions, so you would expect the home side to find the net at some stage in this fixture.

"Spurs are without an away point since January, and despite their heroics in the Champions League in midweek it is worth bettors noting that they did lose the match at the Etihad"

Head-to-head statistics and past style of play in these fixtures are not always the most reliable indicators of future performance due to small sample size but with Harry Kane unavailable for Tottenham it is likely that Mauricio Pochetinno will set his side up in a way that counters City’s more expansive style of play, meaning bettors should expect City to dominate possession.

Tottenham’s away performances have dropped significantly towards the end of the season and this is a cause for concern. Spurs are without an away point since January, and despite their heroics in the Champions League in midweek it is worth bettors noting that they did lose the match at the Etihad.

In one of the most dramatic Champions League meetings of all-time Tottenham knocked out favourites Manchester City to reach the semi-final, for the first time in 57 years. The Premier League fixture will be played just three days after the pair met in Manchester and the result has altered the odds.

The betting market was already expecting goals with the line set at Over 2.5 and 3 goals, but a seven goal thriller at the Etihad in midweek has moved the Total line to Over 3 and 3.5 meaning early bettors will potentially have found value at odds of 1.952 on Over 2.5 and 3 Goals.

Manchester City vs. Tottenham betting: Where is the value?

Where bettors see value in this match is likely related to how dominant they view Manchester City in the Premier League when presented with home advantage. Centred on form, City are justified 1X2 favourites, having won 12 games on the spin at the Etihad in all competitions, in addition to Spurs carrying injuries to key players the home side look the value bet on Saturday, even at odds of 1.335*.

How tough a test this is for City is dependent on if Tottenham can rediscover their away form without key players, having not won a fixture on the road in the Premier League since January. It is likely an encounter that sees goals when you analyse the Champions League fixture in midweek and how dominant Manchester City have been with home advantage this season – making Manchester City – Totals Over 2.5 at odds of 2.170 potentially a value bet.