A close look at the Liverpool vs. Tottenham odds

With home advantage, the 1X2 odds make Liverpool favourites at 1.609*, to beat Tottenham. The implied probability of a win for Jurgen Klopp’s side is around 60%, and with the Reds’ impressive home record this could be a value bet.

The Over/Under is set at 2.5 and 3 which means the betting market is expecting goals with Over 2.5 and 3 Goals currently priced at 1.903*. These two teams’ statistics this season highlight that there is potentially value betting on the Over in this fixture.

Naby Keita and Xherdan Shaqiri both missed international duty with injury, but should be back and fit enough to face Tottenham.

Joe Gomez and Alex Oxlade-Chamberlain are back in full training, but are currently not match-fit.

Tottenham were handed a major injury blow when midfielder Eric Dier was forced out of England’s Euro 2020 qualifier against the Czech Republic during the week, and he looks set to miss out.

Dele Alli is a doubt after picking up a knock for England, and it is unclear whether the 22 year-old will be fit to start. 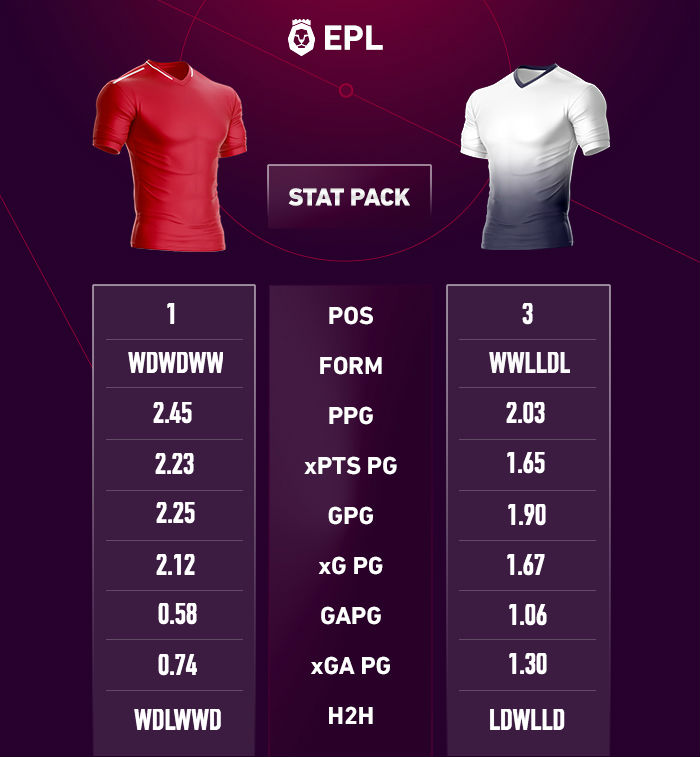 Inform your Liverpool vs. Tottenham prediction

The Premier League title race is entering a pivotal stage in the season as Manchester City and Liverpool go head-to-head to decide who will become champions. The Manchester club have a game in hand but trail Liverpool by two points in second place, so Liverpool will need to make sure they secure all three points against Tottenham on Sunday. A victory or draw for Spurs could hand the reigning champions an advantage, and the Reds will be going all out to make sure this doesn’t happen.

After 30 games of this Premier League campaign Liverpool currently have their best goal difference (+51), have conceded the fewest goals (17), have gained the most points (73), and have already beaten their points total from the whole of the 38-match campaign last season (75). Their current tally of 73 also beats their total in 18 previous Premier League seasons, which highlights how impressive the Reds have been.

One thing that has been evident in Liverpool’s recent form is that the return of Trent Alexander-Arnold has been crucial to their success. With the England international back in the side they become much more threatening when attacking in wide areas, highlighted by his three assists against Watford.

Jurgen Klopp has done an outstanding job of turning this Liverpool side from contenders to both a domestic and European force, and the final step is to win a major trophy this season, which will be possible if they continue their process of (2.22 xGF, and 0.74 xGA per game).

Tottenham are in poor form domestically, going without a win in their last four matches, whilst also failing to register a single shot on-target for the first time under Mauricio Pochettino in the Premier League against Chelsea.

"Liverpool’s process this season has been extremely impressive (2.22 xGF, 0.74 xGA per game), and the Reds will be expected to beat Tottenham"

The North London club looked certain to finish in the top four in February, but three defeats and a draw in their last four matches has seen the chances of that decreasing – though Mauricio Pochettino’s side are still expected to claim a Champions League spot come the end of the season.

Spurs have lost their last three away league games, which is more than they had lost in their previous 13 away from home (which were W-11 D-0 L-2). They have only lost three in a row on the road under Mauricio Pochettino once before, and it is not the kind of form that will attract bettors to take odds of 5.730* on the London club to win the match.

Liverpool vs. Tottenham betting: Where is the value?

Liverpool’s process this season has been impressive (2.22 xGF, 0.74 xGA per game), and the Reds will be expected to beat Tottenham, with the probability of it happening around 60% according to the odds. Given how strong they have been, and with home field advantage being a key factor in this matchup, the Money Line value does sit with backing Liverpool to be victorious.

The Total Goals mark is fairly high at 2.5 and 3 largely due to Liverpool averaging 2.19 goals per game and Tottenham scoring 1.93 goals per game. Recent history suggests games between these two teams usually produces goals and chances at both ends, with both sides finding the net 12 times in the last three meetings, so odds of 1.909* on Over 2.5 and 3 Goals could be a sensible bet.

For bettors looking to different market, it is likely both sides will be looking to get on top early, so expect a fast start. This could also leave both teams vulnerable defensively in the process, and with the attacking talent available to both sides, over 1.5 goals to be scored in the first half can be backed at 2.600* and this looks like a potential value bet.