A close look at the Liverpool vs. Chelsea odds

The home side are the favourites heading into the fixture with the odds suggesting they have around a 60% chance of coming away with all three points. The betting market is also expecting goals with the Over 2.5 and 3 Goals currently priced at 2.000*.

Joe Gomez and Alex Oxlade-Chamberlain are back in full training, but are currently not fit to start.

Ethan Ampadu, Gary Cahill, and Danny Drinkwater are the only notable absentees for Chelsea. 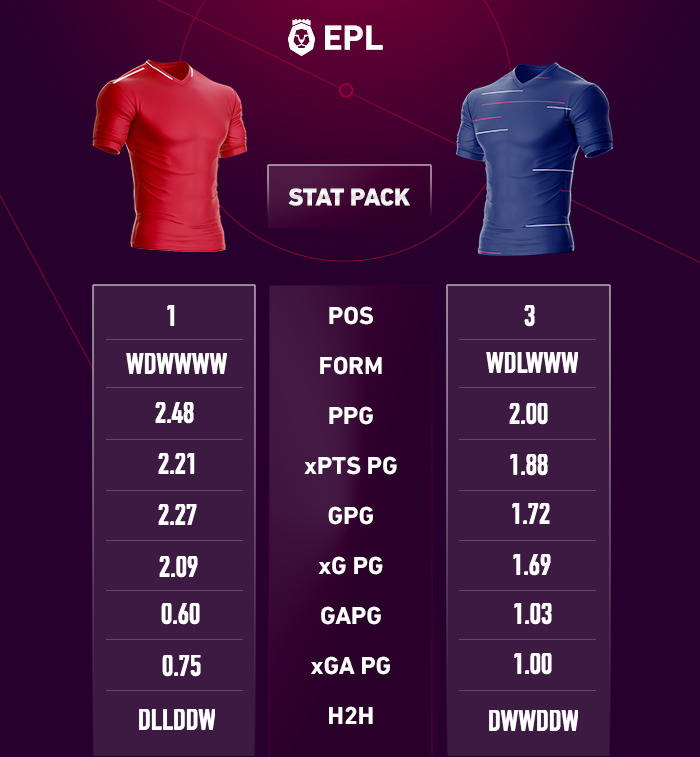 Inform your Liverpool vs. Chelsea prediction

Liverpool left things late to beat Southampton in game week 33, meaning the Reds have now won five of their last six Premier League games, generating numerous chances in the process, at an average of 2.16 xGF per game.

There has been a certain amount of discussion regarding Liverpool’s attack not performing at the same level as last season in the Premier League, but the underlying numbers suggest in recent games Jurgen Klopp’s side have been back to their best.

Defensively they also look extremely solid, conceding an average of just 2.09 xGA, and no side has conceded fewer goals in the Premier League than the Reds, surrendering just 20 goals in 33 games being a key factor to the hugely successful season they have had so far.

Chelsea come into the fixture off the back of a solid victory over West Ham United, but the London club have to travel to Merseyside just three days after flying to and from the Czech Republic to play Slavia Prague in the Europa League.

Chelsea have won three of their last four Premier League games, and have been creating plenty of good chances in these fixtures, averaging 2.11 xGF per game, whilst restricting their opponents to minimal good scoring opportunities, a remarkably low average of 0.90 xGA per game.

The Blues ideally need to win this game to keep in touching distance of the top four pack, so it is likely they will travel to Anfield in search of three points, which should create a more attack-minded match.

Eden Hazard has been directly involved in 28 Premier League goals (16 goals, 12 assists), more than any other player this season and overall against West Ham Mauricio Sarri’s side had 16 attempts on goal with ten different Chelsea players having at least one attempted shot.

Liverpool vs. Chelsea betting: Where is the value?

Defeat for Chelsea will heap even more pressure on Mauricio Sarri, and dent their chances of a top four finish but Liverpool will have an extra 48 hours to prepare for the game due to Chelsea’s Europa League commitments and that makes the Reds – who are unbeaten in their last 37 PL games at Anfield, the value bet at odds of 1.666*.

Jurgen Klopp’s side record at Anfield this season sits at W18-D3-L0 in the Premier League and Champions League whilst Chelsea have lost six of their most recent eight matches against ‘big six’ clubs and with his side currently free-scoring in the League, Liverpool Totals Over 1.5 Goals at odds of 1.704 looks a sensible bet.

To make the most of our best value odds make sure to read more of Pinnacle’s expert soccer betting advice.