http://www.pinnacle.com/en/betting-articles/Soccer/live-soccer-betting-strategy-in-play-pricing/E5L2Q8ZTPRVPW4P7
Betting on soccer matches after they have started is now more popular than ever, with bookmakers able to offer hundreds of betting options during a match. Due to the speed of the game and significance of certain events, odds are incredibly volatile during these live markets. How can bettors take advantage of this with a simple live soccer betting strategy? Read on to find out.

What is live soccer betting?

Live (also known as in-play) soccer betting is simply the act of betting on a soccer match when it is “live” (once the match has begun). While it has been popular for a number of years, it is now growing in popularity at a rapid rate and live markets now take much larger volume compared to pre-match markets.

The ability to bet on a soccer match once the game has kicked off is nothing new. Live markets have been available at bookmakers before betting even made its way online – it is believed the first live bets on a soccer match were placed in the early 1990s. However, since then, bookmakers have enhanced their live betting offering to the point where, for some bettors, it can offer more appeal than the pre-match alternative.

How does live soccer betting work?

The speed at which a game of soccer is played means bookmakers often expend a lot more resource into trading markets once the game starts compared to before a ball is kicked. While data is key to shaping efficient odds before the match starts, it becomes even more important when tracking thousands of data points during a short passage of play to ensure the odds offered are an accurate reflection of what might happen in the next few seconds, minutes or even 60+ minutes later into the match.

If you’ve never tracked live betting markets while watching the same game on television, you may be surprised to find that the markets can tell you what has happened much quicker than what you see if on your screen. While there is obviously a delay in the picture provided to your television, the reason the bookmaker is able to react so quick to on field events is through the use of data.

If you have enough money to access more data and get quicker feeds than a bookmaker, you probably have more profitable ventures to explore than sports betting.

This data can be transmitted via several individuals, known as “watchers” at the match, sending information directly from the stadium to the bookmaker. It could be a “no-delay” feed or stream used by the bookmaker to help trade the markets in accordance with live events. Depending on who you bet with, it could also be handled by a specialist third party provider (likely using one or both of the aforementioned methods) employed by the bookmaker.

Despite the tools the bookmaker has at their disposal, they are still unable to offer markets for the entirety of the match. This is why bettors will see the betting markets being suspended during certain periods of the match. This could be before something is likely to happen (a significant event like a goal, penalty or red card) or immediately after while the bookmaker analyses what’s happened before reposting lines that better reflect the new state of the match.

Live soccer betting will appeal to bettors for all number of reasons. It adds another layer of excitement to the viewing experience for casual bettors. Providing you are willing to put the work in, it also provides an opportunity to expose and exploit the bookmakers’ mistakes that may occur as a result of the required increase in speed at which markets are traded.

As with any sport, market or type of bet, the approach to finding value remains the same whether it’s a pre-game or live bet. Find a way to make more accurate calculations for the likelihood of something happening or not and compare it to what the bookmaker offers you with their odds. If you are consistently more accurate, you will be able to take advantage in the long run.

If you have enough money to access more data and get quicker feeds than a bookmaker, you probably have more profitable ventures to explore than sports betting. If instead you want to work to assess the potential value of the available odds and try to react quicker than the rest of market when there is positive expected value, being able to calculate your own live odds is a good place to start.

In order to aid this explanation, we will do a walkthrough with a simple model. Before getting into the live action, let’s establish a base to work from with the expected goals Poisson distribution model I have explained in a previous article (see below).

Using this method, with a slight adjustment to the number of score line permutations used, the example of Leicester vs. Wolves from the opening weekend of the 2019/20 Premier League season has the following pre-match odds.

We can use a team’s expected goals and the league averages of goals scored and conceded to help us determine the individual team’s goal expectancy and pre-match odds shown above. As highlighted by Mark Taylor in a previous article, we can then use past Premier League data and the following equation to help calculate live goal expectancy.

Using Excel we can create a goal expectation for each team from minute 0-90 of a match using the above formula, and then apply the Poisson function to each of those values to calculate the 1X2 odds for each minute of the match. Below is what the live odds from the expected goals Poisson model look like in comparison to Pinnacle’s live odds for this match. 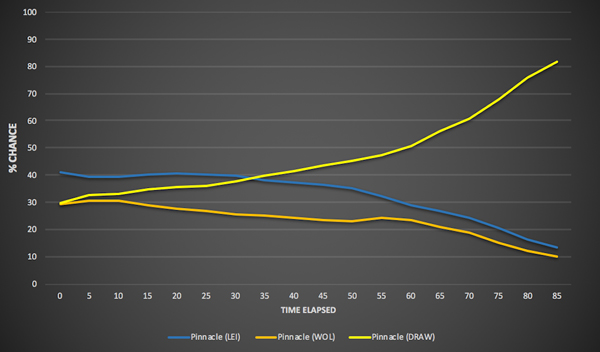 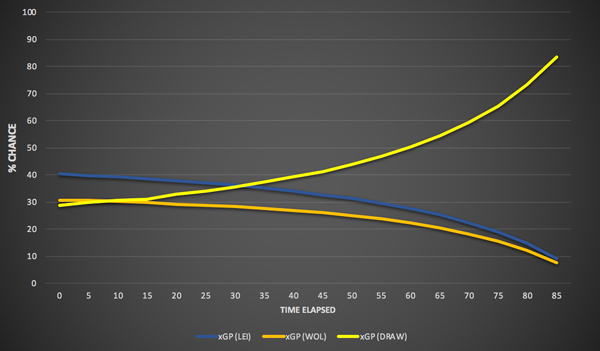 It is important to acknowledge that up until this point, we are only dealing with a neutral game state (no goals or red cards). The fact that Leicester vs. Wolves ended 0-0 helps with the above model vs. odds comparison, but if you are using a live soccer betting strategy, you also need to be able to calculate odds when goals are scored in a match.

We can now use a different example from the opening weekend of the 2019/20 Premier League season to how to calculate the live odds in the event of a goal. In the Newcastle vs. Arsenal match, the pre-match odds derived from the expected goals Poisson model looked like the below.

After the first goal of the match is scored, in order to calculate the odds for the remainder of the match, we can continue to use a similar process to the one outlined above. Instead, we just use the projected result from the remainder of the game (in this example it will be 32 minutes as Pierre-Emerick Aubameyang scored in the 58th minute). We can then combine the estimates from the remaining 32 minutes with the previous estimates from up until the 58th minute.

This means with Arsenal’s one goal advantage; their odds to win the match become a combination of their 34% chance of winning the remainder of the match at 58 minutes (this would be extending their lead), plus the 40% chance of the match being a draw at that time (a draw from 58 minutes onwards would result in a 1-0 Arsenal win). This means Arsenal’s chance of a win after scoring the goal jump from 34% to 74%.

In order to calculate the odds for the draw after Arsenal’s opening goal, only scenarios where Newcastle win by exactly one goal from the remaining goal expectation Poisson distribution would count. If we wanted to calculate Newcastle’s odds to win, we would need to only look at the chance of them winning by two clear goals.

Using the expected goals Poisson model with the remaining goal expectation inputs for the scenarios listed above, below is what the remainder of the live odds look like for the Arsenal vs. Newcastle match compared to Pinnacle’s odds. 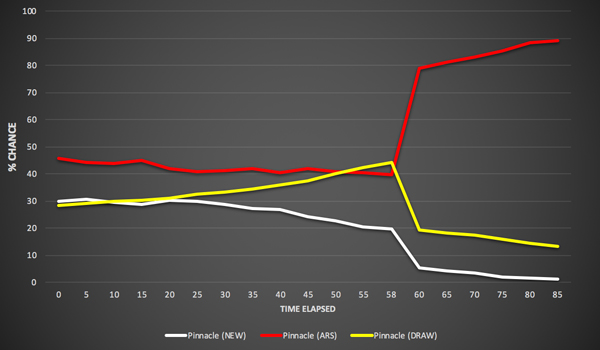 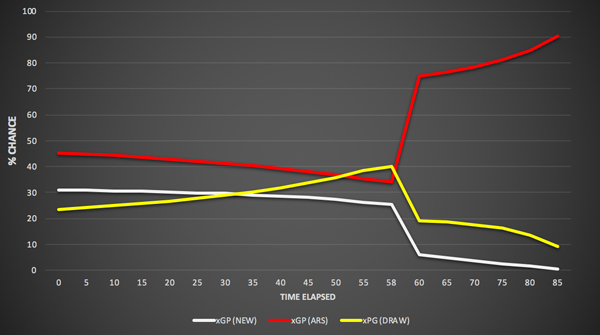 How to develop your live soccer betting strategy

Once you are able to calculate a team’s chance of winning a match before it starts and during the match, you’ll be able to compare your estimates against the odds and bet when you believe the market to be underestimating or overestimating the chances of a specific result.

Through testing this strategy and looking at whether betting on the discrepancies with the bookmakers odds would lead to long term profits, you can begin to see how viable such a strategy is moving forward. Of course, this simplified version is designed to be used as an example to help explain the concept of this article, it is not going to win you money from betting on live soccer matches.

The next step would be to take the process outlined above further and refine it to help adjust your odds using live data (e.g live expected goals) or even better, using team specific data to learn more about how a certain team reacts to going 1-0 down or what happens to their style of play and levels of performance when they are 1-0 up.

Depending on the level of data you have access to, you could look at “batches” of teams based on league position. Although it’s basic information, knowing that top four teams win over 80% of games where they take the lead, bottom three teams win around 5% of games in which they fall behind etc. could help you when looking to develop your live soccer betting strategy.

Finally, it is also worth considering the breadth of markets that are available. While the process above has been applied to the 1X2 market, it could easily be modified to calculate the combined goals for both teams for betting on the Over/Under goals market, individual team goals and plenty more of the alternative options.