The race for Champions League soccer take centre stage as Lazio face Atalanta in this week’s highlight fixture in Serie A. Can Lazio keep their top four hopes alive? Will Atalanta strengthen their position in the Champions League places? Read on to inform your Lazio vs. Atalanta prediction.

Lazio come into the game as marginal favourites (around 42% chance) against an Atalanta side looking to beat Lazio away in Serie A since 2014. The Over/Under market is set at 2.5 and 3, with the odds marginally suggesting it will be a high-scoring contest, with over 2.5 and 3 currently priced at 1.884*.

Jordan Lukaku, Valon Berisha, Stefan Radu and Sergej Milinkovic-Savic remain sidelined through injury. Felipe Caicedo’s brace last time out against Sampdoria should see him retain his place up front, which could demote Ciro Immobile to the bench should Inzaghi opt for only one striker.

Atalanta manager Gasperini has a fully-fit squad at his disposal with no new injury concerns ahead of the match. Mario Pasalic and Robin Gosens will be pushing for starts in the midfield four. 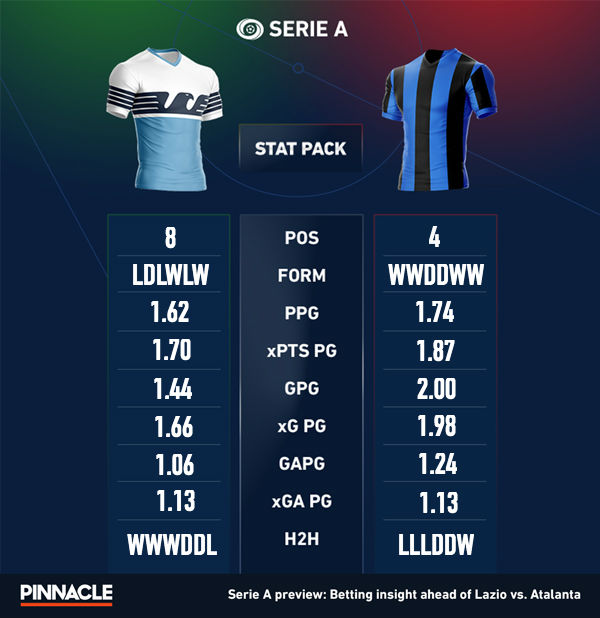 Inform your Lazio vs. Atalanta prediction

With four games left in Serie A, the unmissable race for Champions League football looks set to provide more twists and turns, before we find who will ultimately make it into Europe’s elite club competition.

With Napoli secure in second on 70 points (barring a collapse of epic proportions), the battle for third and fourth looks set to go right to the last day.

Fourth place in particular will be a compelling tussle between Atalanta, Roma, Torino, AC Milan, and Lazio, who are all separated by just four points from fourth-placed Atalanta to eigth-placed Lazio – making this fixture on Sunday a must-win for both sides.

Since losing out on the final day of last season, Lazio will be desperate to finally make it into the Champions League group stage for the first time since the 2007/08 season.

However, despite being at home on Sunday, they are coming up against a free-scoring, fully-confident Atalanta side who are looking to make it into the Champions League for the first time in their 112-year history.

The away side are the joint-top scorers in the division with 68 goals, narrowly overperforming by one more goal than their forecasted xG.

Under Gasperini, Atalanta operate in an attacking 3-4-3 style, utilising their wingbacks Castagne and Hateboer to provide constant overlapping width. Combined with a balanced and energetic central midfield duo of Freuler and de Roon, who win and distribute the ball to their lethal attacking trident of Zapata, Gomez and Illicic, who have contributed 61 goals between them in goals and assists.

Defensively however, Atalanta have the second-worst record of all the teams chasing the top four positions.

Lazio’s troubles have been in front of goal, where they have the second-worst underperformance in terms of xG – scoring seven goals fewer than forecasted. Their attacking deficiency may be down to Ciro Immobile’s form, or better yet his return to regular performance this season.

Last season’s joint Capocannoniere – Immobile outperformed his xG by eight goals – notching 29 for the season alongside Mauro Icardi. This season, Ciro has matched his xG, with 14 goals from an xG of 14.93.

Sergej Milinkovic-Savic is another player who overperformed last season and has regressed to underperformance this season, in both his goals and assists statistics.

On a positive note, Luis Alberto and Joaquin Correa have been in good form for Lazio, with the two midfielders contributing 15 assists and six goals to the cause.

Lazio have been inconsistent of late in the league, with three defeats, two wins and a draw in their last six games, which includes a 1-2 home defeat to already relegated bottom of the table Chievo.

Atalanta meanwhile come into the fixture in great form, unbeaten in their last nine league games, into the Coppa Italia final. They will believe this is their best chance of defeating Lazio at the Olimpico for the first time in Serie A for the first time since 2014.

The Biancocelesti meanwhile know a loss would seriously dent their hope of a top four finish, and would represent a significant mental blow, with three games yet to play after the match on Sunday.

It should be a fascinating encounter between two teams who would love to win in order to boost their Champions league credentials, yet know a loss would be incredibly damaging.

Lazio vs. Atalanta Where is the value?

With both teams vying for a win, combined with the attacking proficiency of Atalanta, the opportunity of a high-scoring game could become a value opportunity and bettors can get over 3 at 2.200*.

Conversely, bettors may opt to back a nerve-wracking encounter between the two sides, who will be desperate not to lose the fixture given its potential ramifications making the away side Atalanta on the 0 handicap at 2.260* a potential option.

Bettors may also choose to adopt a halftime betting strategy given the recent history in this fixture - with both teams having scored in the first half in three of the last five fixtures.

As a result, bettors could choose to back Lazio, who have scored in the first half of four of the last five meetings against Atalanta in the Totals market, with over 0.5 First Half goals currently priced at 1.970*.