Second-placed Valencia host Sevilla this Saturday with just two points separating the La Liga sides. The Valencia vs. Sevilla odds offer plenty of opportunity for bettors, while both teams will be looking to maintain their form and gatecrash Spanish soccer's top three. So where is the value in the Valencia vs. Sevilla betting? Read on for some expert insight.

For the past five years, Real Madrid, Barcelona and Atletico Madrid have dominated the top three positions in La Liga. During that time, Valencia and Sevilla have largely played the part of also-rans. After their encouraging starts to the current campaign, however, can either side dare to dream of breaking into Spanish soccer's top three?

What is most impressive about Sevilla is their defensive strength. In eight league matches, Eduardo Berizzo’s men have conceded just four goals.

We are only eight games into the La Liga season but, already, there is a healthy competitiveness about the division. Barcelona have won seven of their eight games yet are just four points clear of in-form Valencia. In turn, Los Che are a mere point ahead of Real Madrid and two ahead of both Atletico Madrid and this weekend’s opponents, Sevilla.

Following Valencia’s recent struggles in La Liga, their impressive start under ex-Villarreal manager Marcelino will be music to supporters’ ears. They are one of only three unbeaten teams in the league (alongside Barca and Atletico) and have won their last four in a row. This has helped sway the Valencia vs. Sevilla odds in their favour ahead of Saturday’s mouth-watering clash.

Valencia vs. Sevilla odds: The case for Sevilla

With the gap between the teams so small, though, there is still a strong case to be made for Sevilla this weekend. Eduardo Berizzo has guided the Sevillistas to a strong start in both the Champions League and La Liga, with Sevilla achieving an almost-identical record to Valencia’s in home games. Their only two defeats, meanwhile, have come at difficult venues: Atletico Madrid and Athletic Bilbao.

What is most impressive about Sevilla this term is their defensive strength. Indeed, in eight league matches, Berizzo’s men have conceded just four goals. This is only bettered by Barcelona and Leganes and is the perfect counter to Valencia’s free scoring (only Barca have scored more than Los Che). This fixture was drawn 0-0 last season and Sevilla may look to keep it similarly tight on this occasion.

Nevertheless, one factor bettors must be aware of is home advantage, especially in this fixture. In the last 15 La Liga meetings between Valencia and Sevilla, there have been three draws, six Valencia wins and six Sevilla victories: a very even spread. Yet the majority of victories have all come at home; in Sevilla’s last eight visits to Valencia, they have won once, drawn once and lost six times.

Valencia and Sevilla are two of the three best-performing home teams in the league so far this term, which may well continue throughout the course of the season. Away from home, however, Sevilla have won twice and lost twice, certainly making them susceptible against a strong Valencia team.

Valencia vs. Sevilla odds: The impact of European soccer

Elsewhere, another important consideration is Sevilla’s trip to Russia on Tuesday night. Valencia have risen to second in La Liga without the added pressure of European soccer. Sevilla have so far juggled both. Their results directly after both Champions League group games did not suffer but they did only manage a 1-1 draw with Espanyol in between their two European qualifiers earlier this term.

In the last 15 La Liga meetings between Valencia and Sevilla, there have been three draws, six Valencia wins and six Sevilla victories. Yet the majority of victories have all come at home.

Their trip to Liverpool was not as taxing as the flight east was to face Spartak Moscow, reducing preparation time for what is an important league clash on Saturday. Marcelino’s Valencia side will no doubt utilise the extra days’ training, potentially working on their service to Simone Zaza (seven goals) and Rodrigo (five goals), who account for the majority of their attacking threat thus far.

Although Wissam Ben Yedder has netted seven times for Sevilla in all competitions, their top scorers in La Liga – Ganso and Luis Muriel – have just two goals to their name. In fact, Sevilla have totalled no more than nine league goals this season, relying on their defensive austerity to win matches.

That defensive austerity went missing in Moscow, however, with an eye-catching 5-1 defeat now prompting even shorter odds for Valencia.

Valencia vs. Sevilla betting: Where is the value?

Overall, Saturday’s game offers a fascinating proposition. It is almost a case of attack vs. defence, with Sevilla’s previously watertight backline coming up against a Valencia side who won their last game 6-3. Valencia’s last four games have all included at least five goals, as opposed to Sevilla’s low-scoring approach.

After their encouraging starts to the current campaign, can either side dare to dream of breaking into Spanish soccer’s top three?

Judging which team will impose themselves best may be the key to finding value in the Valencia vs. Sevilla odds. If bettors are tempted by home advantage and Valencia’s favourable head-to-head record against Sevilla at the Mestalla, over 3 goals is priced at 2.060*. Conversely, any bettors rating Sevilla’s defence higher than Valencia’s attack - discounting their heavy defeat to Spartak Moscow - may see value in under 3 goals at 1.840*.

Due to the competitive nature of La Liga this season and the form of both sides, the Valencia vs. Sevilla betting does present numerous opportunities. The strength of either team means there is a good price on each Money Line outcome. And Saturday’s result may also teach bettors a lot about Valencia and Sevilla moving forward, ahead of the crucial run-up to the winter break.

Here's how Pinnacle bettors have placed their bets so far: 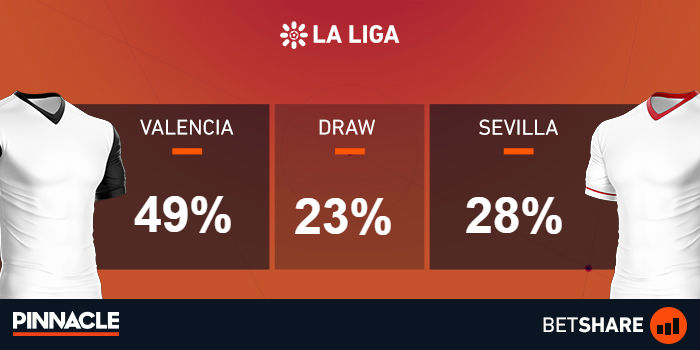