Are Barcelona back to their best?

Since Ernesto Valverde took charge of Barcelona in May this year, his side has only lost on two occasions - both to Real Madrid in each leg of the Spanish Super Cup. Since then, Barcelona have nine wins and one draw from ten league matches and three wins and one draw in the Champions League.

Los Rojiblancos have already slumped to defeat against Atletico Madrid, Athletic Bilbao and Valencia in the league.

This is Barcelona’s best start to a La Liga campaign since 2013/14 and the manner in which they have dominated games so far and conceded just four goals in their last 15 matches, has seen many claim that they are back to the elite performance levels of 2005/06 - 2011/12.

A 7-0 aggregate loss to Bayern Munich in the Champions League semi-final in 2013 signalled the apparent end of Barcelona’s tiki-taka style dominating in both domestic and European competitions. Since then, Barcelona have shared the league title with Atletico and Real Madrid and seen their fiercest rivals lift the Champions League trophy three times in the last four years.

Valverde has adapted Barcelona’s possession-centric style and added even more defensive sturdiness. Samuel Umtiti and Gerard Pique control the play (averaging 82.8 and 72.7 passes per game in La Liga) with Busquets, Paulinho, Rakitic and Iniesta rotating in midfield to provide defensive cover. Lionel Messi is still the main man for the Catalans - he leads the league in goals scored (12) and has the second-most assists for Barcelona (three).

Barcelona vs. Sevilla betting: Do Sevilla stand a chance?

Barcelona are a short favourite in the Barcelona vs. Sevilla betting but it’s easy to see why. While Sevilla sit in fifth place in the league, they have been far from impressive this season. Los Rojiblancos have already slumped to defeat against Atletico Madrid, Athletic Bilbao and Valencia in the league and a shock 5-1 defeat to Spartak Moscow means they have made hard work of progressing from what looked like a relatively easy Champions League group.

Given Sevilla's high number of tackles per game and the potential for frustration to set in when they can’t win the ball back, cards betting could offer some potential value.

Sevilla are by far the lowest scoring side in the top six in La Liga (averaging just 1.1 goals per game) and they have conceded almost as many as they have scored (an average of 0.9 goals per game). For a team that has struggled in front of goal and conceded a goal almost every game, coming up against the best defence and most potent strike force in the league presents a real challenge.

Rather than stand off their opponents, Eduardo Berizzo’s side press high up the pitch and try to win the ball off their opponents (making 21.7 tackles per game - the third-highest total in the league). This could potentially play to Barcelona’s strengths, using short sharp passes to create space in behind their opponents, create high-quality chances and then let Messi and Suarez’s clinical finishing do the rest.

Barcelona vs. Sevilla odds: Where is the value?

Given Barcelona’s short price, bettors may be looking at alternative markets when analysing the Barcelona vs. Sevilla odds. Sevilla sit in mid-table in terms of cards per game figures in La Liga (2.6) but given the high number of tackles and the potential for frustration to set in when they can’t win the ball back, cards betting could offer some potential value.

A two-goal handicap (1.925*) is by no means beyond Barcelona but the Over/Under betting allows for a possible lapse in what has thus far been a solid defensive set up - over 4 goals is available at 2.160*.

Find out what has been the most popular bet in the Barcelona vs. Sevilla 1X2 betting market. 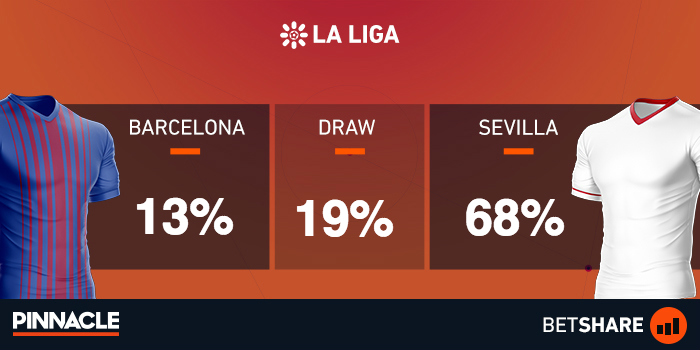