Atletico Madrid vs. Barcelona betting: A one-sided head to head

If Atletico Madrid are to end Barcelona’s 100 per cent record in La Liga this Saturday, they’ll also have to end a winless run dating back seven years. Indeed, Atletico’s last league victory over Barca came as far back as February 2010, with Atletico managing just three draws in the fixture since then – losing a total of 11 times.

At home, meanwhile, Atletico have only mustered one draw in their last seven La Liga meetings with Barcelona (in January 2014), losing the other six. Naturally, Atletico Madrid fans may argue the slate has been wiped clean: the club have now moved to a new stadium, the Wanda Metropolitano. However, the Atletico Madrid vs. Barcelona betting is nevertheless pre-cursored by an extremely one-sided head to head.

Atletico Madrid vs. Barcelona odds: A bigger price for Barca

And yet, despite Barcelona’s stranglehold over Atletico Madrid in La Liga this decade, the Atletico Madrid vs. Barcelona odds give the visitors a relatively high price. There are a number of understandable factors: for starters, political turmoil in Catalonia is affecting the club – they had to play their last game behind closed doors against Las Palmas.

Barcelona are the away team and, regardless of their strong record at Atletico, home team advantage is always worth considering in soccer betting. This is especially applicable in a league where away followings are generally small, with Atletico allocating each visiting club only 250 tickets per game this season; Barcelona claim they have not been supplied any on this occasion.

If Atletico Madrid are to end Barcelona’s 100 per cent record in La Liga this Saturday, they’ll also have to end a winless run dating back seven years. Indeed, Atletico’s last league victory over Barca came as far back as February 2010.

However, Barca remain top of La Liga, having won seven out of seven – and are six points ahead of Atletico Madrid, who drew a blank at Leganes during a 0-0 draw last time out. Moreover, despite the controversy, Barcelona’s recent clash against Las Palmas still resulted in a 3-0 win for Ernesto Valverde’s men, with Lionel Messi once again registering two goals.

The Atletico clash will undoubtedly be Barca’s toughest test of their league campaign to date, with Diego Simeone’s side not losing in La Liga and winning both of their home league games thus far. Barcelona, though, are in scintillating form.

What can we learn from Atletico’s defeat to Chelsea?

Despite being unbeaten domestically, Atletico Madrid  have lost at home this season in the Champions League. And that 2-1 defeat to Chelsea may serve as a reasonable indicator as to the current level of the Atletico squad. The Madrid outfit have signed Diego Costa and Vitolo, who will both arrive in January, but were unable to strengthen this summer due to their transfer-market ban.

Consequently, it's fair to say Antoine Griezmann and co. are showing promise but aren’t quite operating at full potential yet. Although they took the lead against Chelsea, Atletico fell to two second-half goals, exposing as much. Chelsea sit fourth in the English Premier League; in terms of tough propositions, Barcelona represent an even greater challenge.

Six of Barca’s last seven visits to Atletico have ended in a one-goal win. Five of those have been 2-1 victories for Barca.

When faced with their own European examination, against Italian champions and last season’s Champions League finalists Juventus, Barca won 3-0 - in stark contrast to Atletico’s loss.

Valverde’s men have also scored 11 more goals than Atletico so far this season. Interestingly, Messi alone has netted 11 times in La Liga, while Atletico Madrid’s top league scorer is Yannick Carrasco with just three by comparison. Both sides are very good defensively, though, with Barca only conceding two league goals this term – and Atletico conceding four.

Atletico Madrid vs. Barcelona betting: Where is the value?

With the Atletico Madrid vs. Barcelona odds as high as they are for all three possible outcomes, bettors don’t have to look past the money line for value on this occasion. Indeed, both an Atletico and Barca win offer favourable payouts – so too the draw – and it is simply a matter of weighing up the value of form and head-to-head superiority against home advantage.

Another very interesting trend in the Atletico Madrid vs. Barcelona betting is that six of Barca’s last seven visits to Atletico have ended in a one-goal win. Five of those have been 2-1 victories for Barca. Bettors may therefore be tempted by the team totals market, with Barcelona 2.040* to score over 1 and 1.5 goals. Similarly, the overall totals market offers value at 1.990* for over 2.5.

Ultimately, the Atletico clash will be this season’s truest indicator yet of how good Barcelona really are. Bettors who feel Barca have enjoyed an easy ride so far this campaign may be inclined towards Atletico Madrid or the draw.

If this Barcelona side are the real deal, though, there will rarely be a better price for them to win a La Liga game – something plenty of Pinnacle bettors have already capitalised on, as our current BetShare shows: 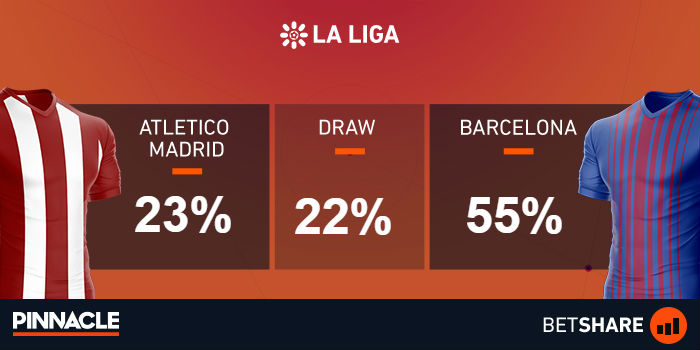