This week’s highlight fixture in Serie A sees table toppers Juventus take on Champions League-chasing AC Milan. Can Juventus take another step towards securing the title? Will AC Milan consolidate their top four position? Read on to inform your Juventus vs. AC Milan prediction.

Juventus come into the match as strong favourites (around 57% chance) against an AC Milan side that has struggled away in Turin in recent fixtures. The Over/Under market odds marginally suggest it will be a low scoring contest, with under 2 and 2.5 currently priced at 1.943*.

Allegri opted to go for a three at the back system last time out against Cagliari, but should return to the more favoured 4-2-3-1 or 4-3-3 formation on Saturday. Juventus are without Cristiano Ronaldo, Juan Cuadrado, Douglas Costa and Andrea Barzagli whilst Paulo Dybala and Sami Khedira face late fitness tests.

Both Gianluigi Donnarumma and Lucas Paqueta went off injured against Udinese and may not recover in time for Saturday’s game, with Pepe Reina to deputise in goal and Patrick Cutrone to either join Piatek up front or make a cameo appearance from the bench.

Tiemoue Bakayoko could be recalled to the side to add solidity in midfield. 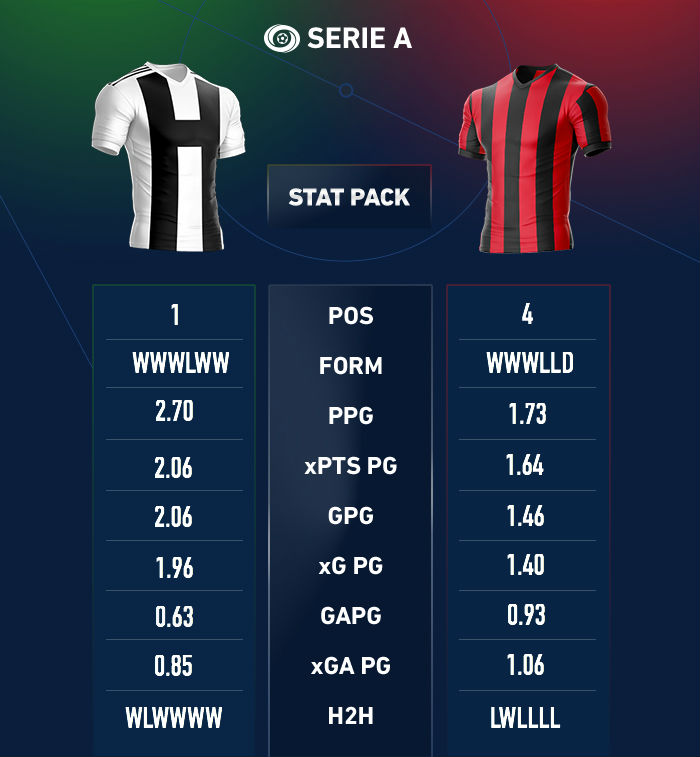 Two of Italy’s most recognised teams face off in Turin this Saturday, both with different agendas heading into the game.

Juventus will be looking to take one step closer in securing what would be their remarkable eighth successive league title, whilst the Milanese outfit are under intense pressure to maintain their top four status from a host of clubs below them all looking to take their spot.

It’s fair to say that Juventus have dominated AC Milan, both home and away, for the last few years, with Juventus winning 16 of the last 18 games against AC Milan in all competitions, with one draw in the Suppercoppa two seasons ago and one defeat at the San Siro in September 2016.

You have to go all the way back to the 2010-11 season for AC Milan’s last away victory at Juventus, highlighting the Old Lady’s dominance in this tie.

Before the derby defeat against Inter three matches ago, AC Milan were on a 10-game unbeaten run in Serie A, winning the previous five in a row heading into the Derby della Madonnina. Since losing that game however, the Rossoneri followed it up with another defeat to Sampdoria, followed by a disappointing 1-1 draw at home to relegation-threatened Udinese.

This is hardly the kind of momentum that AC Milan wanted heading into Saturday’s match in Turin, especially with the negative record they have in away games against Juventus.

On a positive note for Milan, the form of top scorer Krystof Piatek coupled with the likely absence of Juve’s top scorer Cristiano Ronaldo could significantly boost their chances of securing a positive result, with the former notching an impressive seven goals in his last 10 Serie A games for his new club since his transfer from Genoa in January.

Speaking of Genoa, they hold the unlikely honour of being the first team to beat Juventus in Serie A this season, triumphing 2-0 when it looked likely that Juventus were set to record another invincible season.

Juventus will be keen to record that defeat as a minor blip, and followed up that loss with successive wins against Empoli and Cagliari respectively.

In Ronaldo’s absence, it has been 19-year-old striking prodigy Moise Kean who has made the most of his increased game time, scoring four goals in his last four league games, as well as two goals in his first two senior appearances for the Italian National side.

The Old Lady know they are facing AC Milan at a good time and will be buoyed by their recent form in this fixture as well as the knowledge they can make securing another crown a closer reality with another win.

AC Milan meanwhile are under intense pressure to keep up with their Milanese rivals above them, as well as staying ahead of the teams below them, with Atalanta, Lazio, Roma and Sampdoria all still harbouring realistic hopes of replacing them in the Champions League places.

Juventus vs AC Milan: Where is the value?

AC Milan will be delighted if they can come away from Turin without defeat and could set up in a defensive style for solidarity, and boost their chances of securing at least a draw, which could make the Handicap option of AC Milan 0.5 at 2.270* a viable option.

With AC Milan failing to keep a clean sheet in their last four matches twinned with the attacking prowess of Juventus, it could result in the possibility of a high-scoring game and bettors can get over 2.75 goals currently at 2.520*.