The necessity for spending halfway through a season varies. It could be a title-challenging side looking for that Galactico to elevate them to the title. For others, a star signing to evade the drop.

Yet, it does seem that teams are less inclined than ever, particularly in the Premier League, to put their hands in their pockets at winter. Teams appear content to hold onto what they have instead of looking elsewhere.

In the 2016/17 January transfer window, five of the supposed ‘big six’ made a net profit from winter transfers, with Arsenal forking out just £100,000 on ex-non-league youngster Cohen Bramall.

It was the first year since the 2008/09 January transfer window that Premier League clubs made a combined net profit:

Whilst it does seem that Premier League teams have curtailed transfers based on net spend, it must be noted that money spent has seen a gradual increase (with two anomalies) over the past eight years. Last year, however, was the first time that Premier League clubs balanced their spending with sales, and thus ended the January transfer window in the green.

It should also be noted that whilst the 2016/2017 January transfer window did end in an overall Premier League net profit, teams at the lower end of the table bucked the trend. Of the eight teams who finished below 13th in the table, six of those spent over £5 million.

So whilst spending has relatively reduced, multiple clubs are still digging deep into their pockets and spending big in the January transfer window. The question we look to answer: is it worth it?

The January transfer window: The data

In short, this emphasizes a lack of clear correlation between spending money in January and an improvement in points won per game.

Based on the lines of best fit present, the effectiveness of January transfers differs year on year, and it therefore cannot be stated that big spending in the January transfer window necessarily means an improvement in results.

In fact, in three of the seasons the less a club spent the better improvements their season saw. Based on the charts above, the effectiveness, or should I say lack of, which the January transfer window has on Premier League clubs is minute.

The above data points to the idea that January transfer dealings simply do not work. The lines of best fit for three of the last four seasons asserts this opinion. However, this is a huge and dangerous generalisation. To detail the shortcomings of only using these charts, we look towards linear regression using the R-squared test.

Linear regression is a method in modelling the relationship between two variables. The R-squared test, also known as the Coefficient of Determination, is a statistical measure of how the regression line approximates the real data points. In other words, the R-Squared score details whether the line of best fit on a chart is has a strong correlation to the actual points.

The above table details the lack of correlation between the line of regression and the data on the charts itself. Therefore, the lines of regression can only be used with a pinch of salt and with scores this low (anything below 0.2 is extremely low), the lines can almost be ignored altogether.

So, in general, it means that there is no correlation between spending in January and an improvement in form; a surprising result based on the media’s portrayal of the importance of the January transfer window to improve a club’s current predicament in the Premier League.

Why do January transfers happen?

So, based on data given there is no clear correlation between spending money in the January transfer window and an improvement in results over the past few Premier League seasons.

Yet clubs still on average spend big money in the January transfer window despite the long list of failures over the years. Why?

Based on the data below, the difference in spending in the January transfer window between those involved in a relegation dogfight and the rest of the league looks apparent: 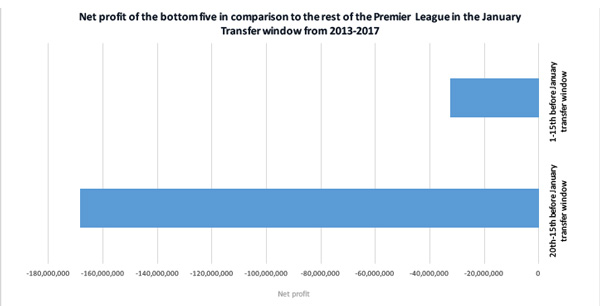 Over the last few January transfer windows, the bottom five teams have spent more than the rest of the 15 Premier League teams combined by a huge amount.

It is no secret that the window acts as a final catapult towards a particular goal within the league, and for those staring at relegation, spending in January does not compare to the multi-millions lost with a season (or more) outside of the Premier League.

Again, this is a generalisation. However, there is a clear increase in January transfer movement within those at the lower echelons of the table than those further up it.

Namely due to the fact that changes must be made as their poor position in the table is due to issues within the team that need to be resolved. Teams further up the table may be less inclined to spend in the worry that new signings may destabilise the current squad for an individual player.

Often this increase in transfer activity is due to a new manager at a clubs helm. As a new manager joins, they bring a particular style and mode of playing soccer that may not suit the current personnel. The necessity for new players is therefore heightened.

Those at the lower reaches of the table change their manager more often in order to see a change in progress. Clubs doing well are obviously less likely to change their man in order to maintain status quo. Therefore, more clubs fighting relegation will be changing their managers throughout the season which in turn increases January Transfer window activity.

As many of the topics established in this article are generalized, there are clear anomalies that should be considered when looking at Premier League betting markets after the January transfer window.

For example, there are particular managerial appointments leading up to the January transfer window that have proved successful time and time again.

Take veteran Premier League manager Sam Allardyce. A manager whose points per game ratio has never dipped below 1.16 across his 14 years as manager.

His last three managerial roles in the Premier League have begun between the start of the season and the January transfer window (Sunderland in October 2015, Crystal Palace in December 2016 and Everton in November 2017).

In his January transfer windows with both Sunderland and Crystal Palace, he spent big; £39 million and £27.3 million respectively in order to get both sides out of the relegation zone.

The spending worked on both occasions, improving the clubs points per game by 0.64 at Sunderland and 0.78 at Crystal Palace. Joseph Buchdahl has previously analysed the effect a new manager may or may not have.

This may not be a direct correlation to the January transfer window itself, but how a change of personnel In managerial tactics has cemented his team; but Sam Allardyce has developed a system that reaps points with a particular type of personnel that he acquires in the window. Whether this trend will continue this season is up for debate.

I cannot emphasise enough however, that of the success stories detailed in the above table, the overall success of spending money in January fluctuates from example to example, with many of the examples above including ulterior variables that may have played more of a role than the January transfer window.

For instance, Crystal Palace’s impressive second half of the season in 2013/14 could be due to the managerial appointment of Tony Pulis; a manager with a reputation of playing a style of football that whilst may not be easy on the eye, increases points won for those teams struggling.

Similarly, Arsenal’s improvement from a dismal start in the 2-14/15 season could be due to many of their starters suffering long-term injuries early in the season. Once those players had returned from injury in the latter half of the season, their points won per game number increased.

The results: What this means for bettors

Whilst reading this information is beneficial, the crux of the importance of this data is what really matters to us bettors: What does this mean for betting once the January transfer window slams shut?

In short, nothing changes. The idea that a big star signing for a team will transform results is one with very little evidence of working time after time. There are anomalies, of course, but in general, a team who changes little apart from the personnel in January tends to repeat their pre-January form.

Could Sam Allardyce restore Everton’s form after a January transformation once again; based on past data, possibly. But once again, the data is just too small to prove that this will be a repeat occurrence, particularly as he still only reached the lofty heights of thirteenth with both clubs before his new appointment.

Overall, don’t get caught up in the shining lights of new winter signings. Focus closer on managerial changes, tactical exuberance, and style differences. Those who spend big when struggling at the lower reaches of the table will most likely struggle once again.