This week’s highlight fixture in Serie A sees champions Juventus travel to Milan to play Inter in the Derby d'Italia. Can Inter consolidate their top three position? Will Juventus open the door for the teams below Inter to make ground on the Champions League places? Read on to inform your Inter Milan vs. Juventus prediction.

Inter come into the game as marginal favourites, with the odds implying they have around a 41% chance of winning the match, against a Juventus side who have nothing else to play for this season other than matching their record league points total.

The Over/Under is set at 2 and 2.5, with the market odds marginally suggesting it could be low scoring contest, with under 2 and 2.5 currently priced at 1.925*.

Marcelo Brozovic and Sime Vrsaljko remain the only injury concerns ahead of the visit of the Champions. Former captain Mauro Icardi could be recalled to the starting 11 ahead of Lautaro Martinez, while Borja Valero could make way for Gagliardini in the heart of midfield.

Keita Balde and Joao Mario will be looking to make cameo appearances from the bench.

Juventus have a number of injury concerns ahead of the trip to Milan with Mario Mandzukic, Mattia Perin, Martin Caceres, Sami Khedira and Giorgio Chiellini all unavailable for the Champions.

With Paulo Dybala carrying a knock and Juve already champions, Allegri may opt to rotate his team with no pressure to secure a positive result – giving game time to fringe players such as De Sciglio, Spinazzola and Mavididi. 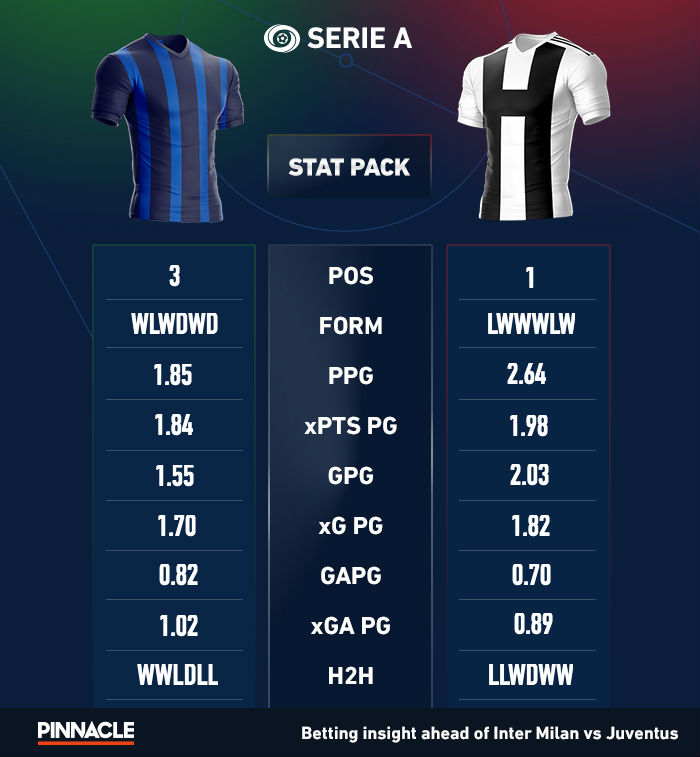 With the title already secured, this weekend’s Derby D’Italia means a whole lot more to the home team than it does to the away side.

Juve arrive in Milan knowing they are already Champions and have no other competitions left to play for this season. Inter will be aware that a few more negative results could place their once seemingly secure Champions league place in real danger.

Nonetheless, Juventus manager Allegri will still demand a performance from his players regardless of their circumstance, with a possible motivation being to match the record 102-point total achieved under Antonio Conte.

With motivation a question mark for the away side, Inter will know this is there best chance to record a home victory against the reigning eight time champions and secure their position in the top three. Inter’s last two home league victories against Juventus were in 2016 and 2010.

Usually an intense rivalry given this fixture’s deep-rooted history in Italian football, Saturday’s encounter could lack intensity given the circumstances which could lead to an unusually high-scoring game.

The controversies around Mauro Icardi, who was stripped of the captaincy in February, may have contributed to Inter’s big underperformance in terms of xG, with the Nerazzurri scoring six goals less than forecasted.

Conversely, while Inter aren’t scoring as much as they should be, they have actually been overperforming in term of xGA, conceding six goals less than forecasted to somewhat even out their inefficiencies in front of goal with more resolute defending.

Juventus meanwhile have been consistently overperforming across all statistics all season, scoring more, conceding less and gaining and unprecedented 21 points more than forecasted at the start of the season – the largest xPTS differential of any teams across Europe’s top five leagues.

That being said, recent losses to Genoa and SPAL appear to indicate Juventus may have eased off in recent weeks, with rotation and constant changes in personnel potentially contributing to those losses.

Inter know a loss this weekend could allow AC Milan, Atalanta and Roma to cut the gap to third place and put their Champions League hopes in jeopardy. In contrast, a win would ease the pressure on Inter manager Spalletti and could even open the possibility of dislodging Napoli in second place.

Inter Milan vs Juventus: Where is the value?

With Inter at home to a Juventus side with nothing to play for other than pride, combined with potential rotation to the Juve squad, the possibility of a high-scoring encounter becomes a more viable option for bettors and with odds of Over 2.75 goals to be scored in the match currently at 2.600*, offering potential value for bettors.

Given the concerns with Juve’s focus, Inter Milan on the Split Handicap could also be an intriguing option for bettors, with Inter -0.75 currently priced at 3.100*.