The final highlight game from Serie A this weekend will see Champions League qualification and relegation decided as Inter Milan take on Empoli in a game which could have huge repercussions for both sides and the teams around them. Will Inter Milan secure a top four position? Can Empoli survive on the final day? Read on to inform your Inter Milan vs. Empoli prediction.

Inter come into the match as heavy favourites (around a 71% chance) against an Empoli side that is fighting for their Serie A survival. The Over/Under market odds suggest it will be a high-scoring contest, with over 3 currently priced at 1.787*.

Stefan de Vrij and Sime Vrsaljko once again miss out through injury, leaving Spaletti with almost a fully fit squad at his disposal. Roberto Gagliardini and Lautaro Martinez will both be looking to feature from the start, with Joao Mario and Keita Balde also pushing for the starting spot. Danilo D’Ambrosio looks set to lose his spot at right-back to Cedric Soares.

Antonio La Gumina, Luca Antonelli, Kevin Diks, and Rade Krunic are all missing out through injury. Domenico Maietta looks set to drop to the bench for Freddie Veseli to replace him in defence, whilst Leonardo Capezzi could come into midfield to replace Traore as the match progresses. 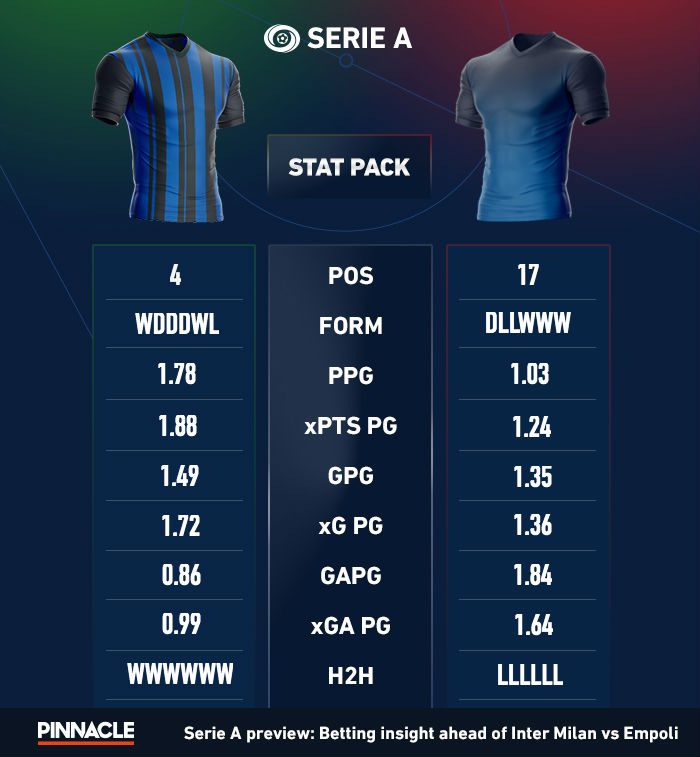 As Serie A reaches its conclusion, it looks set to be a dramatic finish as both the top four and bottom three will be decided by close-of-play on Sunday – with Inter Milan and Empoli having a massive say at both ends of the table.

Sunday’s game at the San Siro means so much to both teams, as a victory for Inter guarantees them Champions league football, whilst a win for the away side secures their place in Serie A for another season.

A draw could still achieve both clubs’ targets, but it will mean depending on other results to go in their favour.

If the odds are anything to go by, this should be a routine victory for Inter against a team of Empoli’s stature, but with the added pressure of having to secure a positive result plus the determination Empoli will have to secure a result themselves, it will by no means be an easy game for the Nerazzurri to navigate.

Atalanta and AC Milan are both hoping to finish ahead of Inter in the top four. Atalanta are level on points with Inter, but above them in third place thanks to their head-to-head record, whilst AC Milan are just one point behind Inter in fifth place.

All three teams know that any slip-up could result in missing out on a Champions League spot.

”Finishing outside the top four would be an absolute disaster for Inter, especially if their arch-rivals AC Milan beat them to it.”

It should also be mentioned that Roma in sixth do have a mathematical chance of finishing in the top four but would need to beat Parma by at least five clear goals, have Inter lose 1-0, see Atalanta avoid defeat and Milan lose. Alternatively, Roma can also finish fourth if they beat Parma and all three teams above them lose.

Inter had been on a seven-game unbeaten run before their damaging 4-1 defeat to Napoli last weekend whilst their opponents Empoli, who looked doomed a few weeks ago, have won their last three games on the bounce with some impressive victories against Fiorentina, Sampdoria and last weekend’s coincidental 4-1 home victory against Torino.

Inter’s attacking deficiencies have been clear to see all season, relying on their defence to see them through games due to their goal scoring underperformance in terms of xG (eight goals less than predicted). To add greater perspective, they have only scored five goals more than Empoli this season.

In contrast, it has been Empoli’s defensive frailties that have left them clinging to survival on the final day, conceding eight goals more than forecasted - only 20th placed Chievo have been underperforming worse defensively.

If Empoli do stay up, much of the credit will be on the shoulders of on-loan goalkeeper Bartlomiej Dragowski and striker Francesco Caputo.

Both have been excellent this season, with Dragowski making numerous and critical saves throughout the season, including making a record-breaking 17 saves in one game against top scorers Atalanta to give his side a crucial point in a 0-0 stalemate.

Caputo have averaged just over a goal every other game for Empoli this season, with 16 goals in 37 appearances. The 31-year-old is far and away Empoli’s top scorer, with right-back Giovanni Di Lorenzo and centre midfielder Rade Krunic next on their scoring charts with five goals each.

Without these two, Empoli would already be joining Chievo and Frosinone in Serie B next season, and they will hope to put in one more good performance on Sunday to preserve their top-flight status.

Inter Milan know they cannot afford to slip up and will be hoping that their controversial former captain Mauro Icardi or his understudy Lautaro Martinez can fire them to Champions League qualification this weekend.

Finishing outside the top four would be an absolute disaster for Inter, especially if their arch-rivals AC Milan beat them to it.

17th placed Empoli hold a one-point lead over Genoa below them and will be hoping Fiorentina will end their winless run against Genoa on Sunday, as an Empoli defeat and a Genoa draw would see Empoli go down due to their inferior head-to-head.

With so many possibilities and massive consequences for all of the teams mentioned as well as others, the season finale of Serie A looks set to be unmissable.

Inter Milan vs. Empoli: Where is the value?

Inter have won the last six matches against Empoli and should do so again this weekend with bettors potentially finding value on the Handicap market, with Inter -1.5 currently priced at 2.140*.

Goals may look inevitable in this game given Empoli’s defensive inefficiencies, but Inter themselves have not been prolific in front of goal, which could lead bettors to back Inter on the Totals market to score one and shut up shop, with Under 2 currently priced at 2.270*.

What’s more, Empoli are in great form and possess the ability score at the San Siro given the stakes involved, with odds of Over 0.5 Empoli goals at 1.588* on the Totals market another option for bettors.