Live soccer betting is very popular as it allows bettors to stake money on an event they have previous knowledge in. The most significant event in soccer is obviously a goal and by using historic data we can estimate the likelihood that the team who is ahead or behind after the first goal will win the match in order to bet accordingly.

How often does a team win after scoring the first goal?

Across the last seven full seasons in the Premier League, the team that scored the first goal won the match 69% of the time, with a draw occurring in 19% of matches and a team managing to come from behind to win in just 12% of games. Of course, not all teams are equal, and when you break the league table into five bands, the percentages of wins, draws and defeats vary. 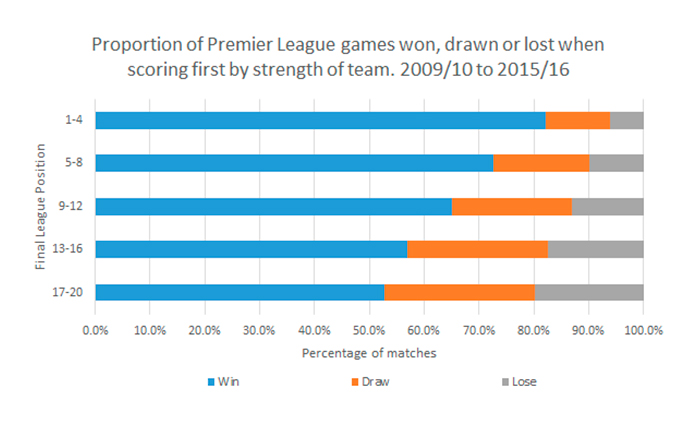 If a top four team takes the lead then they win the match over four times out five games, whereas a bottom four side will still only have marginally better odds than a coin flip of winning.

How team ability affects the chances of a comeback

The total percentages for wins, draws or losses are obviously flipped when a team concedes first and breaking it down into bands of four teams again sees a similar outcome as before. 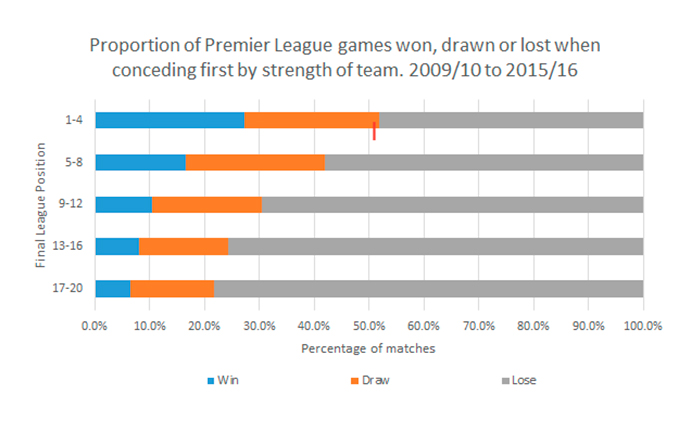 The majority of the percentages match up pretty closely when flipped. For instance, a top four team only loses 6.1% of matches when they score first, and bottom four teams only win 6.4% of the time when conceding the opening goal of a match. With this information, bettors can estimate the likelihood of a team winning, drawing or losing depending on the scorers of the first goal.

Comparing odds and probability after the first goal

The odds which are offered for live soccer betting are constantly changing depending on the situation in the match, so let's take a closer look at the 2015/16 Premier League season. Using Pinnacle's odds from the time immediately following an opening goal, we can compare how the odds offered matched with what then ultimately happened in the matches.

Across the last seven full seasons in the Premier League, a team managed to come from behind to win in just 12% of games.

The following table shows the difference between Pinnacle's implied probability of an outcome following the opening goal and the actual proportion of the time that it happened. For instance, the average odds for a team who finished in the top four winning after they scored the opening goal implied they had a 72% chance of victory, but it actually happened in 75% of matches; giving a difference of 3%.

It's no surprise to see the least amount of variation at the top and bottom of the table, as the very best and worst sides will generally be the easiest to predict.

From a bettor’s perspective, we can see that in percentage terms the most favourable outcome to bet on was a team who finished between 5th and 8th losing after scoring first, as the probability implied by the odds were 5.9% higher than the amount of times it actually happened.

The difficulty comes with correctly predicting when this will happen, as it only happened six times last season. That said, four of the six were away from home, and the two home defeats (both for Southampton) were against Manchester United and Chelsea, so neither of these results were unlikely.

Other factors to consider

There are countless variables to consider with live soccer betting, which means that relying on the percentages in the above graphs will never be a fool-proof system. Important factors include whether the side scoring first is at home or away, at what point in the match the opening goal is scored, and as the season wears on trailing teams may take more risks in their desperation for points - this is all part of learning how to calculate odds for live soccer betting.

From a bettor’s perspective, the most favourable outcome to bet on was a team who finished between 5th and 8th losing after scoring first.

As with any bet, there will also be random exceptions that can't be predicted. When the home side scored the opening goal in Arsenal vs. Swansea and Tottenham vs. Newcastle last season, Pinnacle's odds implied that the home team had around a 90% chance of winning. Both visiting sides turned it around and won though, showing that there are always exceptions to every rule.

It's also important to consider when teams tend to score and concede goals too. Sunderland scored the third highest proportion of goals in the final 15 minutes of matches last season, and Crystal Palace conceded the third highest proportion in the same period. The Mackems scored in this period in both matches against Palace in 2015/16 and earned four points in the process.

The above information can help to guide your choices with live soccer betting though, and there will always be a potential benefit in comparing it with the odds offered once the first goal has been scored.

To find out which staking method is best or learn more about how to calculate expected goals in soccer, visit Betting Resources - the home of Pinnacle's expert betting articles.