Ever wondered how to calculate live odds for soccer betting? A Poisson calculation can be used so you can determine if the market accurately reflects on field events. Find out more.

A side’s chances of a particular outcome change the moment a match starts. The longer a game remains goalless, the more likely a draw becomes. There are a number of game incidents that can alter live odds such as yellow & red cards, but it is goals that produce the most dramatic alterations for live bettors.

From a betting perspective, knowledge of the current match odds is essential for those trading in play, and by calculating these they can identify if actual in-game odds are accurate. This is where a Poisson approach provides a basic framework. Every game can be evaluated in terms of the average number of goals each team will score at a particular venue.

Let's use West Ham vs. Man City in Week 9 of the 2014 Premier League as an example. The Hammers - even with home field advantage - were still rated well below last year’s champions, Manchester City, based on the long-term achievements of both teams.

West Ham were expected to average 0.85 goals to Manchester City’s 1.90 goals. A Poisson approach would see City winning around 62% of such games, West Ham 15%, with 23% ending in a draw. These probabilities were consistent with the odds available prior to kick off.

Bettors should be aware that goal scoring tends to accelerate as time elapses, as players become fatigued and risks more readily taken as managers go in search of the elusive goal. This is highlighted by 45% of goals being scored before half-time compared to 55% scored after the interval.

A more general fit for calculating the goal expectation of a side at a particular point in the match can be done with the following equation derived from actual Premier League scoring data.

Therefore, 55% of the side’s initial goal expectation remains in the second half, in keeping with the observed data. We can of course use this equation to calculate the remaining goal expectation at any time during the match, something very useful for live soccer bettors.

Just prior to West Ham’s opening goal after 21 minutes, when 78% of a typical game remained and the match was still level, the respective goal expectations for each side had fallen from an initial 0.85 and 1.9 to 0.69 and 1.54 goals, respectively.

If we input these two revised figures for West Ham and Manchester City into a Poisson we can generate score lines and their associated probabilities that lead to either a home win, away win or a draw.

Impact of a goal on live soccer betting

These figures then changed dramatically when Morgan Amalfitano scored to put West Ham ahead. If we ignore the effect of the new game state in this initial overview, the probabilities for each individual score line occurring in the remainder of the game will remain the same as calculated above.

However, should West Ham only “draw” the remaining 70+ minutes, they will win the match, because they now hold a one goal lead.

So at 1-0, with 21 minutes elapsed, a Poisson calculation - using decayed initial goal expectations for each side - gave the home team a 42% chance of victory, up from around 16% immediately prior to the opening goal. This shows the impact a goal has on game outcomes.

This in running win probability is made up from the 16% chance that the Hammers “win” the final 74 minutes of football - increasing their winning margin - and the 26% likelihood that they “draw” it and maintain their current overall advantage.

Therefore, each live scenario depends on the initial strengths of each team, the time remaining and the current score, along with additional factors, such as red cards.

Like City who went 2-0 down, a side trailing by two goals needs to “win” the remaining part of the match by exactly two goals to claim a point or by a margin of three or more to claim all three. A Poisson - with the appropriately decayed goal expectations - can be used to quantify the likelihood of that happening.

Despite David Silva's goal in the 77th minute making the score 2-1, so little remained meaning that West Ham still had around a 70% chance of a winning immediately after the goal.

Although the closeness of the prize may have made the tension feel more pronounced for their fans, compared to over an hour previously when their team had opened the scoring and held the same advantage on the scoreboard.

A team specific, Poisson approach to in running odds estimation is an improvement on using generic outcomes.

For example on average, a home team wins around 70% of the matches where they score the opening goal after 21 minutes. A pure Poisson approach gave West Ham only a 42% winning chance at that point, reflecting the differing perceived abilities of the respective sides.

Actual betting data from the day gave the Hammers around a 35% chance of winning immediately following the first goal. Perhaps indicating an expectation that trailing sides are likely to attempt to increase their scoring rate whilst behind and also accounting for West Ham’s early yellow card that may have compromised them later in the game. 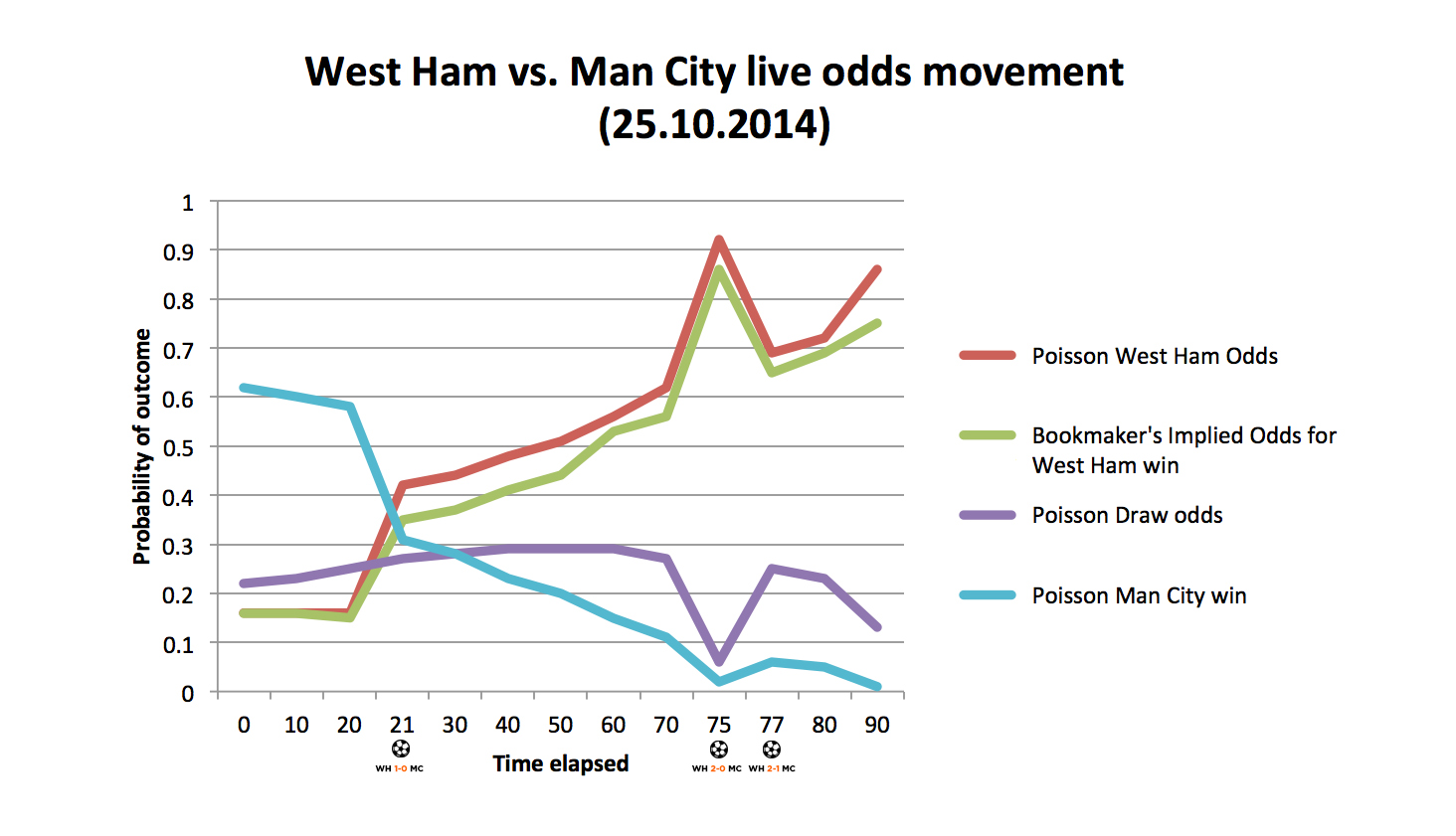 The graph above compares the Poisson calculation for all game outcomes and the implied probability of a West Ham win as a reflection of the live Pinnacle odds.

This analysis highlights that bettors can use a Poisson approach to calculate live match odds during a soccer game, and can therefore judge for themselves if the market accurately reflects on field events, most notably when a goal is scored, to identify profitable opportunities.