It’s no secret that soccer stars like Lionel Messi or Cristiano Ronaldo can change games whether coming on or off the pitch – that impact is built into the market. But what about the substitutions of players further down the food chain? This article investigates how substitutions impact live soccer odds.

The idea that a soccer player can come off the bench and change a game is widely known. But which players can provide more of an impact than reflected in live odds? And what other vital changes do subs bring that you need to notice for live betting?

In fact, studies have shown that in-game fatigue causes a reduction in sprint distance, less involvement in decisive actions, fewer sprints in a match, longer recovery time after sprints, and worse technical and tactical performance.

What has been less investigated is the difference between how starting players and substitutes compare.

For example, one research project suggested that the number of sprints performed by players brought on as subs is actually higher than those who played all 90 minutes. This theory adds weight to just how impactful a substitute can be and their significance to match outcomes.

Why are substitutions made?

The first step in understanding how a substitution will affect live betting is to consider the thought process behind it. Is the manager trying to grab another goal? Or is he strengthening his defence? Maybe he’s been forced into using a substitute due to injury, or he needs to reshuffle his side after a red card? How does the perceived intention relate to the odds for the game?

You can gain an advantage by calculating a manager’s intentions before the bookmakers. For example, substitutions are not always explicitly clear in their intention. They are not all as obvious as to take off a defender and add a striker to increase attacking intention.

Decisions can be subtler. Removing an attacker isn’t necessarily a negative intention; it could allow midfield players to push into deeper roles or to allow a full-back to play as a wing-back.

A great example was Chelsea vs. Monaco in the 2004 Champions League semi-final. The game was tied at 1-1 when Claudio Ranieri made two fatal substitutions in an attempt to win the game.

Other examples of this include introducing a defensive midfielder to free up the other players to play higher up the field, or to put a pacey full-back to act as a winger. There have been cases where managers have brought on a tall centre-back to play upfront to cause chaos in the air for direct balls. By understanding players’ strengths in different areas of the pitch, bettors can anticipate the motives behind substitutions and bet accordingly.

The impact substitutions can cause to formations can also be more important than the change of personnel. A great example of this was Chelsea vs. Monaco in the 2004 Champions League semi-final. The game was tied at 1-1 with Chelsea holding a one-man advantage when Claudio Ranieri made two fatal substitutions in an attempt to win the game.

Prolific forward Jimmy Floyd Hasselbaink came on for right-back Mario Melchiot, followed seven minutes later by centre-back Robert Huth, who replaced midfielder Scott Parker. The resulting formation was a mess – Chelsea were fielding three natural centre-backs, a left-back, three central midfielders and three strikers, with one of the midfielders and one of the forwards playing on each flank.

Anyone watching could see a disjointed nature to Chelsea’s play as the players struggled to adjust to playing in unnatural positions. The result of the substitutions was three-fold – an insurmountable 3-1 advantage to Monaco, the final nail in Ranieri’s coffin and a quiet profit for anyone who understood that Ranieri’s tinkering was a bridge too far.

Of course, not all substitutes are created equal. Therefore it’s vital to calculate which players positively impact games, which have less of an effect, and how this affects live betting. Take a player like German international Sami Khedira. How would you consider his significance as a substitute during his time at Real Madrid?

During one particular game, Real Madrid were strong favourites at home to Getafe but drawing 0-0 at half-time. Jose Mourinho replaced Raúl Albiol with Khedira – the game ended 4-0 to the Galacticos. 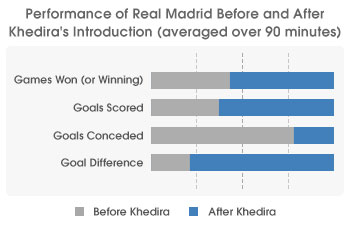 How important was Khedira’s introduction? How often do such changes happen and have a significant impact on a game, go unnoticed, and are therefore not accurately reflected in the in-running odds?

One idea would be to create your own list of “super subs”, which is easy to do on a basic level. Using Khedira as an example, a good way to monitor his impact is to see how his team performs before and after his introduction to a game.

From 2011 onwards, Khedira was used as a sub 12 times for Madrid, playing a total of 301 minutes. After coming on Los Blancos scored 17 goals and conceded just two. Prior to his introduction, Madrid had managed 27 goals and conceded 17 in 779. This suggests that Khedira not only improved Madrid’s defence but also moved their average minutes per goal from 28.9 to 17.7 – not bad for a defensive midfielder.

Khedira also scored just once in those 12 matches, meaning his performances would have been easy to overlook and therefore less likely to be reflected in the live odds. Just how many Khedira-type players are there producing potential value in live markets when joining or leaving games?

Cristiano Ronaldo, Lionel Messi or Gareth Bale would all be great to have on the bench if a manager wanted to win a game but if you’re hoping they will change the odds in your favour, you’re mistaken.

A general rule is that if the player entering the pitch is a superstar – or a TV pundit has branded him a “super sub” – bookmakers will have already taken his potential impact into consideration. Next time one of the above players is named on the bench (and has no fitness issues), check out the live betting to see how the odds shift when they come on.

The Halo Effect describes the way in which people can gain a skewed opinion by relying on their intuitive judgements. In terms of substitutes this would manifest in over-valuing players that have scored dramatic or memorable goals as subs (e.g. Adam Le Fondre) but for whom overall data suggests their contributions are not significant (or sample size is too small to accurately evaluate).

Which managers are the most effective at making substitutions?

As discussed, not all substitutes have to score or create a goal to justify their value. At the same time, though, substitutes that can directly impact the game in this way are extremely valuable to a team - and so too a manager that can make them happen.

A general rule is that if the player entering the pitch is a superstar – or a TV pundit has branded him a “super sub” – bookmakers will have already taken his potential impact into consideration.

One potential factor to consider when betting is which managers make the most effective substitutions. As with many studies, of course, this is an imperfect investigation as there are a range of variables during a match. But a tangible way of measuring this would be how many substitutes a manager introduced that directly contributed to a goal (through scoring or assisting).

As stated, this may neglect a substitute that changed the game indirectly and may also place too much emphasis on a substitute who simply added a goal when his team already enjoyed a commanding lead. However, it remains a practical way of measuring how different substitutions could affect live betting – be it through the money line, totals market or other ways.

Knowledge of which managers have the best records with such tactical moves can also help bettors make a judgement on a substitution before the bookmaker. Using this method, below is the data for the 2016/17 Premier League season:

*(-1 for a substitute that scored an own goal)

As can be seen, there are no surprises that Chelsea boss Antonio Conte (the league-winning manager) made 18 substitutions that directly resulted in a new player making an assist or scoring a goal. And yet he has been bested in this department by Arsenal’s Arsene Wenger, who is often criticised for his lack of adaptability.

The most notable performer, though, is Eddie Howe. The Bournemouth manager had a far less expensive squad to work with but was able to influence matches heavily through substitutions despite not having the international stars at his disposal that Wenger or Conte possessed. This season, Howe was able to do more of the same, with substitute Jordon Ibe registering two assists against Brighton (turning a 0-1 scoreline into a 2-1 win).

Knowledge of which managers have the best records with such tactical moves can also help bettors make a judgement before the bookmaker.

Another interesting case is Southampton’s Claude Puel, scoring a respectable seven but still being sacked at the season’s end. Bob Bradley, too, managed six during his short managerial spell, with overall results not being enough to keep him at Swansea City.

Middlesbrough fans may be unsurprised to see Aitor Karanka’s total absence from the table, with the Spaniard accused of being too negative with his management. Karanka may have a counter-argument in that he had no adequate resources available to him to change a game from the bench.

Finally, Marco Silva was able to star with a score of seven despite only being at relegated Hull City for a few months. Bettors may benefit from following his progress now that he has moved to Watford, a club with far more resources available to them than Hull.