This week’s highlight fixture in Serie A sees two teams battling for European qualification, as Fiorentina take on Lazio. Will Fiorentina play themselves into Europa League contention? Can Lazio close the gap to the Champions League places? Read on to find out more.

The 1X2 odds suggest that Lazio are the marginal favourites to win the game, with a 39% chance of securing an away win. The Over/Under is set at 2.5, with the current Pinnacle odds favouring a high-scoring contest with over odds priced at 1.892*.

Kevin Mirallas remains the only injury concern ahead of the game, giving Pioli a selection and formation decision ahead of the game. La Viola could revert back to a 4-3-3 after their switch to a 3-4-2-1 was unsuccessful last time out against Atalanta.

Full back Vincent Laurini will be pushing Federico Ceccherini for a start, as well as Edmilson Fernandes and Giovanni Simeone looking to displace Bryan Dabo and Gerson in central midfield and attack.

Jordan Lukaku, Wallace and Valon Berisha all miss out through injury, whilst Stefan Radu also misses out through suspension, forcing Inzaghi into defensive changes.

Forward Joaquin Correa faces a tussle with Felipe Caicedo for a starting spot whilst Marco Parolo will also be pushing to make it into the team ahead of Lucas Leiva. 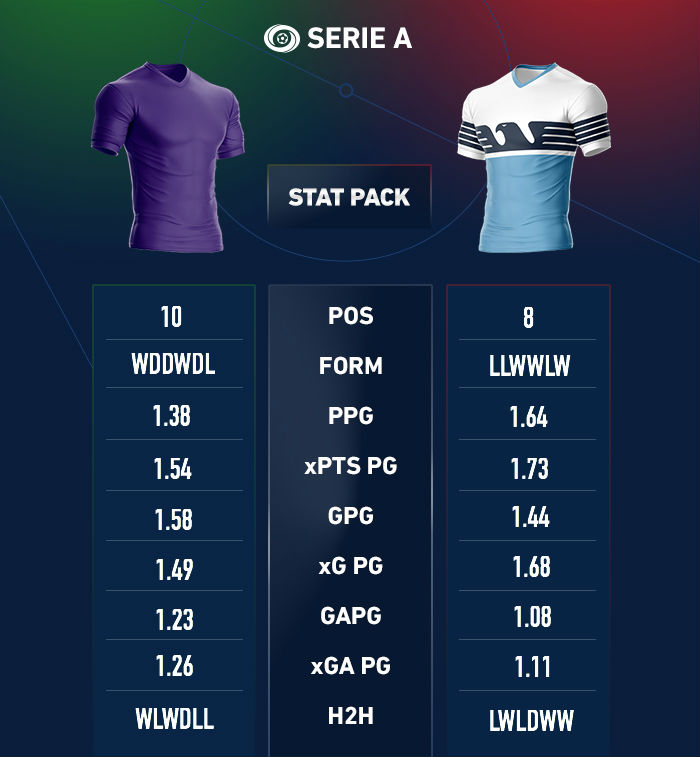 Inform your Fiorentina vs. Lazio predictions

Fresh off an emphatic 3-0 win in the Derby della Capitale against Roma, Lazio are unquestionably full of confidence heading into the game against Fiorentina and will be looking to go level on points with their eternal rivals by winning their game in hand to firmly put themselves in Champions League contention.

Yet again, Lazio have relied on the goal scoring exploits of former Capocannoniere Ciro Immobile, who has averaged a goal every other game in Serie A, with 12 strikes in 24 appearances.

Lazio are currently underperforming in terms of expected goals, scoring five goals less than forecasted with Fiorentina conversely overperforming by three goals in terms of xG which suggests that Lazio will need to improve their finishing to maintain their top four push whilst Fiorentina have been fortunate in attacking situations so far this term.

The absence of experienced centre back Stefan Radu through suspension could cause issues for Lazio, as they will have to play an untested back three but summer signing Francesco Acerbi has been an astute acquisition from Sassuolo and should make up for the loss of Radu on Sunday.

Draw specialists Fiorentina have tied more games this season (12) than they did in the entirety of last season (nine), with 12 games still to play this campaign.

The signing of Sevilla striker and former Sampdoria player Luis Muriel on loan has been a masterstroke from Pioli.The Columbian has five goals in seven Serie A games, and has eased the burden on central midfielder Benassi who is their current league top scorer with seven.

There have been over 2.5 goals in six of the last eight meetings in Serie A.

The pressure will be on both teams to secure a positive result on Sunday, with Fiorentina finding themselves on the periphery of continental football if they were to lose, and Lazio facing the prospect of falling from the Champions League contenders group of AC Milan, Inter, and Roma to the Europa League battlers group of Atalanta, Torino, Sampdoria, and their opponents Fiorentina.

Fiorentina vs. Lazio: Where is the value?

With Fiorentina conceding many goals of late and with their recent history in the fixture, bettors will look to the Over/Under market for value, with over three currently priced 2.480*.

Should Lazio discover their attacking potential that has so far eluded them and contributed to their underperformance in xG, then they could beat Fiorentina by a comfortable margin, with Lazio -0.25 on the Handicap market currently priced at 2.150*.

Conversely, with Fiorentina drawing so many game of late, bettors could opt with the 0 Handicap on Fiorentina to cover this scenario, which is currently priced at 2.150*.