This week’s highlight fixture in Serie A sees midtable Fiorentina take on Champions League-chasing AC Milan. Can Fiorentina break their remarkable winless run? Will AC Milan close in on a top four position? Read on to inform your Fiorentina vs. AC Milan prediction.

AC Milan come into the match as slight favourites (around 41% chance) against a Fiorentina side that has struggled in recent fixtures. The Over/Under market odds marginally suggest it will be a low scoring contest, with under 2.5 currently priced at 1.925*.

Jordan Veretout is currently suspended, while German Pezzella is suffering with a jaw injury, and Marko Pjaca isn’t playing due to his ligament injury. They will all miss out, with Federico Chiesa set to return to the starting lineup. Montella may also revert back to a 4-3-3 system in an attempt to finally break the winless run his team are currently on.

AC Milan will be without Giacomo Bonaventura, Davide Calabria, Mattia Caldara, Ivan Strinic, Andrea Conti, and Lucas Biglia through injury, while Lucas Paqueta also misses out though suspension. In better news, Captain Alessio Romagnoli returns from suspension to the heart of defence.

Biglia’s injury could see Fabio Borini or Jose Mauri come into the starting eleven, with Samu Castillejo also looking to feature from the start. 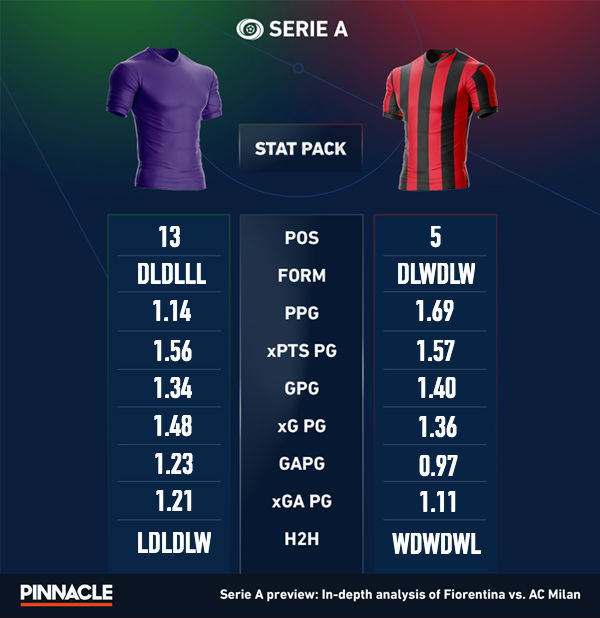 Fiorentina will be hoping it’s eleventh time lucky as they look to break their astonishing winless streak against an AC Milan side, who know a win is imperative if they want to secure Champions League football next season.

At one stage Europa League qualification looked like a more-than-realistic option for Fiorentina, who were in the mix along with Torino, Lazio, and Sampdoria in March with just two points separating 6th to 10th place.

Fast forward to May and La Viola find themselves in the midst of their worst winless run of the season, with the last victory coming against SPAL in late February 11 matches ago – leaving them 19 points off from a Europa League spot.

AC Milan meanwhile have been inconsistent of late, having won, lost and drawn in their last three matches, which has opened the door for Atalanta to leapfrog them into fourth position, leaving them three points back in fifth place with three games remaining.

Fiorentina’s poor form lead to the resignation of former manager Stefano Pioli in April, with Vincenzo Montella unable to improve results since he took over. AC Milan manager Gennaro Gattuso is under intense pressure to secure a top four finish, with his position as manager on the line should he fail to do so according to some media outlets are to be believed.

Montella has inherited a team that has had problems in front of goal this season, with Fiorentina underperforming their xG by five goals. Defensively they have been somewhat resolute, with the seventh best record for GA this term.

The goal scoring inefficiency coupled with resolute defending is perhaps the reason why Fiorentina have drawn the most games in Serie A with 16.

The Rossoneri meanwhile really have been a picture of inconsistency in recent weeks, after a run of 10 games unbeaten between December and March. Since the Derby della Maddonnina in mind March – AC Milan have just two wins in the last eight games and have surrendered the initiative to fellow Champions League chasers Atalanta and Roma.

Capocannoniere contender Krystof Piatek is without a goal in his last four league games – his worst run in an AC Milan shirt.

Piatek went five games without a goal when he was at Genoa pre-January, and will be hoping to get on the scoresheet against a Fiorentina side lacking confidence, especially after they lost the Tuscan derby to relegation-threatened Empoli last time out.

AC Milan know a draw may not be good enough in their pursuit of a top four finish depending on the results of Atalanta and Roma, which could leave them vulnerable to the counter attacking threat of Chiesa and Muriel in wide areas.

Fiorentina have just one win in their last six meetings against AC Milan in Serie A, which came in the reverse fixture earlier this season where a goal from Federico Chiesa gave La Viola their first win at the San Siro since 2013.

Fiorentina vs AC Milan: Where is the value?

With AC Milan vying for a win, coupled with a lack of confidence in Florence, there could be a high-scoring game in the offing with over 2.75 goals currently priced at 2.270*.

Bettors can also get AC Milan to score over 1.5 goals themselves in the Totals market at 2.350*.

Bettors may also opt to back AC Milan in extending Fiorentina’s winless period to 12 games, with AC Milan on the 0.25 Split Handicap currently priced at 1.413*.