A close look at the Everton vs. Arsenal odds

The away side are the favourites heading into the fixture at Goodison Park with the odds suggesting they have around a 45% chance of coming away with all three points. The betting market is also expecting goals with the Over 3 goals currently priced at 2.100*.

Yerry Mina - The centre-back suffered a suspected hamstring injury in Colombia's defeat to South Korea and is a doubt for the match with Arsenal.

Andre Gomes - The Portuguese international was taken off with a knock in Everton's match against Chelsea and will face a late fitness test ahead of the clash.

Laurent Koscielny and Granit Xhaka will both face late fitness tests after missing out on the Gunners previous match against Newcastle.

Lucas Torriera – The Uruguayan is still suspended so will not be available, which should mean that Matteo Guendouzi will keep his place in midfield. 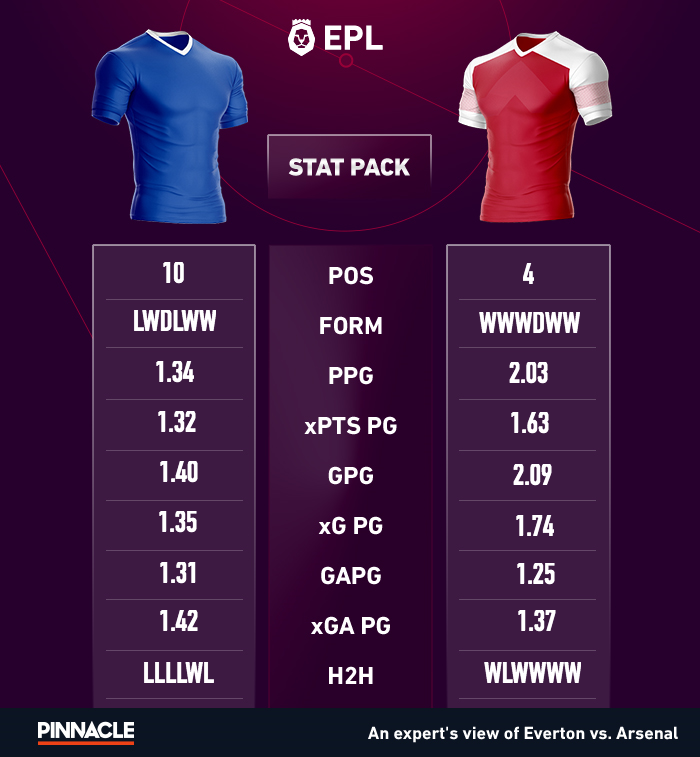 Inform your Everton vs. Arsenal prediction

With six games remaining in the Premier League, Everton have the opportunity to finish the season in a respectable position. It has been an unsatisfactory campaign for Marco Silva’s side despite plenty of promise preseason. Varying performances and up and down results have been a regular occurrence and it’s often difficult to predict how the Blues will perform on match days.

They come into the fixture off the back of an impressive win away at West Ham, their second in succession, and looked very good when attacking, particularly in the first half, but it is worth bettors noting that as good as Everton performed, West Ham were extremely poor all-round.

The Merseyside club are certainly playing better football under Marco Silva, and their underlying process has improved, but in terms of results, their expected position hasn’t altered much, and given the money Silva has spent, more improvements are needed if they want to close the gap on between themselves and the top six sides.

"The North London club have won five of their last six Premier League matches, only dropping points at Tottenham in a 1-1 draw in a game they deserved to win (xG: TOT 1.65 – 2.80 ARS)"

Their defence is still vulnerable both home and away (1.42 xGA per game) and you would expect it to be exposed at some point again against an Arsenal side that have averaged 2.10 goals per game this season.

Arsenal head into this fixture off the back of a dominant performance against Newcastle at Emirates Stadium and are in outstanding form in the Premier League. The Gunners will be looking to claim all three points at Goodison on Sunday to maintain their current edge in the race for a top four finish.

The North London club have won five of their last six Premier League matches, only dropping points at Tottenham in a 1-1 draw in a game they deserved to win (xG: TOT 1.65 – 2.80 ARS). These figures show that Unai Emery’s side’s performances of late have been very strong and the Gunners are creating chances on a regular basis, averaging 1.69 xGF per game, with the figure increasing 1.91 xGF when playing at home.

Despite their resurgence and fine form, Arsenal’s defensive troubles are still apparent on the road, and until they can fix this issue there is always the feeling that they can be vulnerable defensively when they do not have home advantage.

The Gunners average around 1.50 xGA per game which will give Everton hope that they can secure a positive result on Sunday. Although it is worth bettors noting that whilst the London club have accumulated just 19 points from their 14 Premier League games away from home, they have only suffered defeat twice to sides outside the top six.

Everton vs. Arsenal betting: Where is the value?

Arsenal have managed to score at least two goals in their last six matches in the Premier League and possess the third best attack at present, with their average goals per match being 2.10, so odds on Over 1.5 Arsenal Goals, at 2.00* potentially offers bettors a value bet.

Analysing which team will impose themselves best is potentially the key to finding value in the Money Line odds. If bettors are tempted by home advantage and hesitant to back the Gunners outright due to their inconsistent away form then the split handicap of 0 and +0.5 at odds of 1.970 on Everton looks a sensible bet.

Looking at potential value in other markets, Arsenal’s away form is the 10th best in the league and Unai Emery’s side have only secured five wins on the road, but the Spaniard does possess the third highest scoring team in the league and this typically points to a high-scoring fixture. Both teams score in around 70% of games involving Arsenal this season, with the average percentage of games in which both teams score for the Premier League being around 52% - so the probability is high that both sides find the net at some stage.