London rivals Chelsea and Arsenal meet in the Europa League final in the Olympic Stadium, Baku. As an all-English final held in Azerbaijan, most of the build-up has surrounded the final’s dubious location which has forced fans and players to stay at home. But, where might bettors find value in the game itself? Read on to inform your Chelsea vs. Arsenal prediction.

A close look at the Chelsea vs. Arsenal odds

The odds imply that the Europa League trophy is most likely to leave to Baku with the Blues, with Chelsea’s odds of 1.751* giving them around a 57% chance of victory by the end of the night. While Arsenal’s odds of 2.179* currently give them a 45.89% chance of winning.

Blues manager Maurizio Sarri is optimistic midfielder N’Golo Kante will be fit in time for Wednesday’s final – with the player having returned to training following a hamstring injury suffered on May 5.

Meanwhile defender Antonio Rudiger and forward Callum Hudson-Odoi are certain absentees – alongside midfielder Ruben Loftos-Cheek who ruptured his Achilles' tendon in a US friendly game against New England Revolution.

Much of the pre-match build for the final is the news that Arsenal’s Armenian midfielder Henrikh Mkhitaryan will not travel to Baku over fears for his own safety – due to political tensions between Azerbaijan and Armenia.

Elsewhere, it’s suggested injury-plagued striker Danny Welbeck, who hasn’t played since breaking his ankle against Sporting Lisbon in November, could make the bench in what would be a farewell appearance – should he play a part. 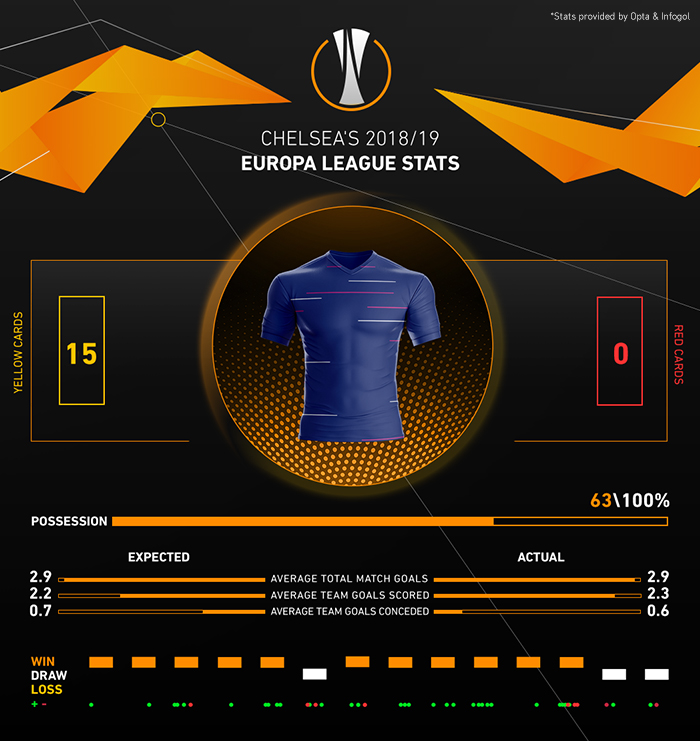 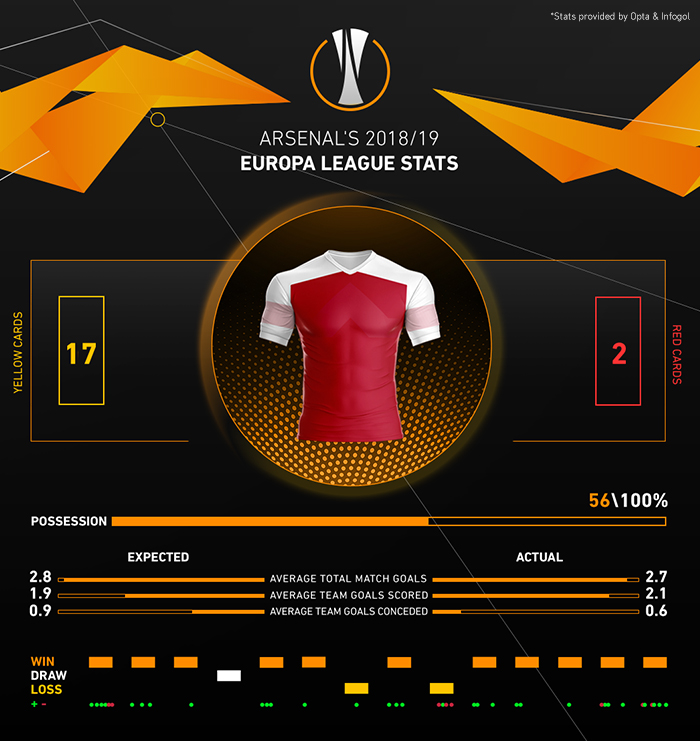 Inform your Chelsea vs. Arsenal Prediction

Separated in the end by just two points in the Premier League, Chelsea and Arsenal could both be considered to have had mixed seasons – with new managers Maurizio Sarri and Unai Emery drawing almost equal parts praise and criticism throughout the course of the season.

For Sarri, a third place finish behind the exceptional Manchester City and Liverpool can itself be considered an achievement – particularly given Tottenham’s occupation of third for much of the second half of the season.

Losing to Manchester City on penalties in the League Cup in March, as another achievement of sorts, this was perhaps the defining image of Chelsea’s season came during that game. When in extra time, an injured-looking Kepa Arrizabalaga defied his manager’s orders to be substituted and remained on the pitch.

Symbolic of the rumoured fractured relationship between Sarri and some of his players, victory in the Europa League final would cement this season as being one of outright success for Chelsea – though it may not even be enough to keep Sarri in his job.

In many ways, Wednesday’s final holds much bigger significance for Emery’s Arsenal – given they, unlike Chelsea, failed to qualify for the Champions League via the Premier League.

Going unbeaten for 22 games in all competitions between August and December, Arsenal’s form and the perception of Emery’s tactical prowess cooled post-Christmas

Finishing just a point behind bitter North London rivals Tottenham in fourth, Arsenal missed a series of chances to go above Spurs in the closing quarters of the season – losing three successive league games to Crystal Palace, Wolves, and Leicester in April.

Going unbeaten for 22 games in all competitions between August and December, Arsenal’s form and the perception of Emery’s tactical prowess cooled post-Christmas – though their return of 70 points in the Premier League was a marked improvement from 2017/18’s tally of 63.

While Chelsea won the Europa League in 2013, and the Champions League in 2012, Arsenal haven’t won a European trophy since 1993/94 when they beat Parma to win the now-defunct European Cup Winners' Cup.

Should Emery guide Arsenal to victory, the perception of their season would change dramatically - with Champions League qualification also placing the Gunners in a much better position to attract high-calibre players in the summer transfer window.

Looking at both teams’ respective routes to the final, Chelsea breezed past Group L – winning five and drawing once against BATE Borisov, MOL Vidi, and PAOK.

However, their semi-final opponents Eintracht Frankfurt proved a much more even test – with Chelsea eventually seeing them off 4-3 on penalties, with Eden Hazard scoring the vital spot kick.

With both ties ending 1-1, the combined expected goals for the two-legs was 1.9 – 1.9, proving the lottery of the penalty shootout really was all that separated the two teams.

Looking at the first leg, which had an expected goals tally of Eintracht Frankfurt 0.4 and Chelsea 1.2, the Blues dominated midfield but kept coming short of creating the number of clear chances you’d expect from their overall dominance.

Like Chelsea, Arsenal also had an unbeaten group stage – winning five and drawing one game alongside Sporting CP, Vorskla Poltava and Qarabag in Group E.

Recording a 3-1 aggregate victory over Zurich in the round of 32, Arsenal overturned a 3-1 loss away at Rennes, to win the second leg 3-0 in the round of 14 – sending them through 4-3 on aggregate.

Facing a real test against a good Napoli side in the quarter finals, Arsenal surprised many by keeping a clean sheet over the two legs, winning 3-0 on aggregate.

Drawing with Valencia in the semi-finals, who had dropped down from the Champions League, a 3-1 victory at home and an incredible 4-2 victory gave Arsenal a 7-3 aggregate victory.

Analysing the underlying performances of both teams by looking at their expected goal stats, the first leg was actually a much more even game than suggested – with Arsenal ending the game with 2.6 expected goals compared to Valencia’s 2.1.

Playing in just seven of Chelsea’s 14 games en route to the final, Hazard spent a total of just 362 minutes on field out of Chelsea’s 1,290 minutes in the competition

While Lacazette (2) and Aubameyang were clinical for Arsenal, Valencia missed two big chances early on,, which could have changed the entire complexion of the game.

Scoring all seven goals of the two legs between them – including an Aubameyang hat trick in the away leg, Arsenal were utterly reliant on Lacazette and Aubameyang – with the attacking duo effectively carrying their teammates to the final.

With combining both legs, the expected goals map reads Arsenal 3.8 Valencia 4.2 – proving poor finishing by the Spanish side and exceptional finishing from Lacazette and Aubameyang was the main difference between the two sides.

With Arsenal’s reliance on Lacazette and Aubameyang in the latter stage of the competition being well-documented, Chelsea have actually used their undoubted best player, Eden Hazard, rather sparingly in contrast.

Playing in just seven of Chelsea’s 14 games en route to the final, Hazard spent a total of just 362 minutes on field out of Chelsea’s 1,290 minutes in the competition, or just 28% of the total time.

Making just three starts, the only game Hazard completed was the 120 minute semi-final second leg vs. Frankfurt – in which of course he scored the divisive spot kick.

Often rested by Sarri to keep him fresh for the Premier League, Hazard’s Europa League return of one assist and no goals is not reflective of his actual form or quality – and Chelsea have likely underperformed in the competition in his planned absence.

With the Europa League final almost certainly his last game for Chelsea, amid intense rumours of a summer transfer to Real Madrid, Hazard could provide Chelsea with the perfect parting gift.

Scoring 16 goals and providing 15 assists in his 37 Premier League games – Hazard had an expected goals tally of 12.30, though he has surpassed this number in each of his last five seasons. This is a sign his over-performance is due to genuine ability – rather than luck or poor defending.

Scoring 54 of his past 62 league goals from inside the box, Hazard has netted just five times from outside the box in his past five seasons – a stat which could influence how Arsenal’s defence may choose to combat the Belgium.

With an average Europa League Expected Goals Against figure of 1.6, compared to the actual figure 1.4, Arsenal’s defence has benefitted from poor opposition finishing and moments of luck in the competition – something they can’t retaliate to when coming up against Hazard.

Chelsea vs. Arsenal: Where is the value?

Given the formidable attacking options of both sides – as well as some suspect defending – bettors may be interested in considering the Over odds of 1.961*.

While common wisdom will often state that cup finals, particularly in Europe, are tight affairs, the research actually shows that three of the last five Europa League finals have been decided by more than one goal – with the market often underestimating the probability of more goals than average.

This season, the two games between Chelsea and Arsenal featured an average of 3.5 goals – compared to the league average of 2.82. Interestingly, the Europa League goals per game average is just 2.75 – with one goal scored, on average, every 32 minutes.

Potentially suggesting the London sides are actually more attack-minded than their European counterparts.