Second-place Atletico Madrid face midtable Espanyol in our highlight game from Spain’s top division this week. With Barcelona securing the title last weekend, will in-form Atletico consolidate their grip on second place? Or can Espanyol cause an upset? Read on to inform your Espanyol vs. Espanyol prediction.

A close look at the Espanyol vs. Atletico Madrid odds 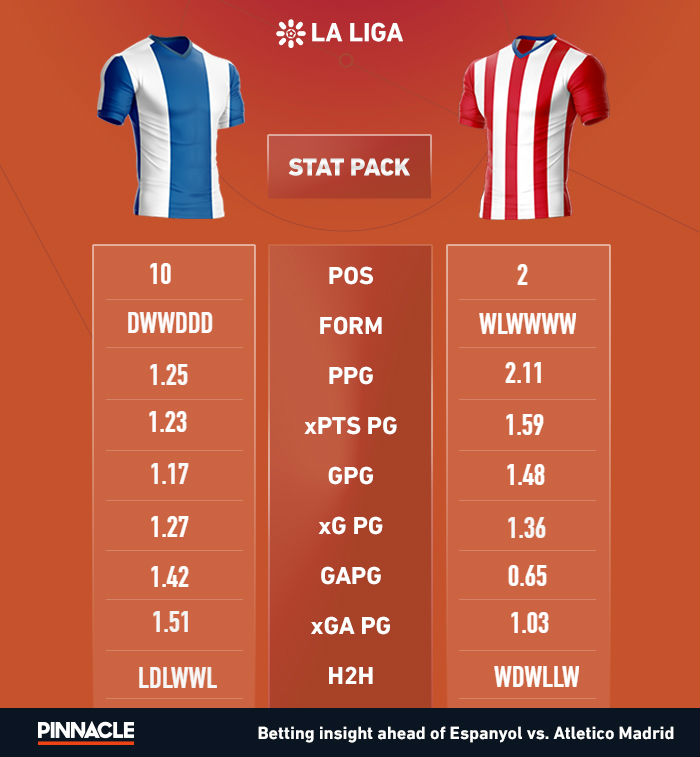 With the destination of the La Liga title a foregone conclusion for weeks, Barcelona were finally officially confirmed as champions last weekend – after beating Levante 1-0.

Unable to mount any form of a serious title challenge this season, Atletico can cement second place in La Liga with a point away at Espanyol this weekend – as they currently hold a nine point lead over neighbours Real in third place – who host Villarreal on Sunday.

As Atletico’s season comes slowly to a mundane end, Diego Simeone and his men have endured a frustrating and disappointing campaign – with August’s Super Cup victory against Real the only real highlight.

Eliminated in the Round of 16 by Girona and Juventus in the Copa del Rey and Champions League respectively, and both by via late goals, Atletico’s season effectively ended in mid-March – with Los Colchoneros confined to domestic soccer ever since.

In terms of their style of play, Simeone’s Atletico have always placed more emphasis on their defensive responsibilities rather than the necessity to score goals - with Atletico’s ability to grind teams down combined with their devastating counter attacking options a hallmark of the team in recent years.

While repeated injuries to Diego Costa, and the mixed-form of new attacking recruits Nikola Kalinic and Thomas Lemar, among other reasons, have prevented Atletico from matching Barcelona– their own record in comparison to this time last year is relatively similar.

In their last outing, a Joaquin Fernandez Moreno own goal was enough for a 1-0 victory at home to Valladolid. Unsurprisingly, World Cup-winner Antoine Griezmann has remained their star player this season – scoring 15 goals and providing eight assists in 34 league games.

For Espanyol, another midtable finish looks likely. The team from Barcelona, who finished 11th on 49 points alongside Real Sociedad and Celta Vigo last season, are currently 10th with 44 points with three games to go.

Much like their opponents Madrid, Espanyol have been in good form recently – with just four teams in La Liga gaining more points than them in the past six game weeks

Much like their opponents Madrid, Espanyol have been in good form recently – with just four teams in La Liga gaining more points than them in the past six game weeks.

Drawing 1-1 away at Real Betis on Monday night, Periquitos, as they’re also known, can consider themselves unlucky not to come away with all three points – with a late strike from defender Zou Feddal denying them victory.

Looking at the head-to-head record between Espanyol and Atletico Madrid, an Antoine Griezmann penalty was enough to separate the teams in the reverse fixture in Madrid back in late December.

In many ways, the game encapsulated what have been traditionally close fought encounters between the two sides – often with very few goals.

In their last six La Liga meetings, Espanyol have won two, including both games last season – with Atletico winning three.

In the six games, there was just nine goals – an average of just 1.5 per game.

Espanyol vs. Atletico Madrid: Where is the value?

Given their excellent form, it’s not hard to see why the 1X2 odds make Atletico Madrid the 1X2 favourites at 2.179*. However, it’s possible this won’t offer value to bettors – so looking at alternative markets could be worthwhile.

Given the fixture’s historical lack of goals, bettors may be tempted by Under odds of 1.847*.