Two London rivals who have struggled at their new homes meet on Saturday as Slaven Bilic’s West Ham welcome Tottenham to the London Stadium. Can the Hammers replicate their derby day win against Spurs back in May? Or will Mauricio Pochettino’s Tottenham continue their impressive away form with a win in Stratford? What value can be found in the West Ham vs. Tottenham odds? Read on to find out.

There is no doubt that the move from Upton Park to the London Stadium has caused problems both on and off the pitch for West Ham. It must not go unnoticed the trials and tribulations a soccer team often endure when relocating.

Yet it was against Spurs that West Ham enjoyed arguably their finest hour in their first season in Stratford, as Slaven Bilic’s men ended their local rival’s Premier League title hopes with a 1-0 win back in May, courtesy of a 65th-minute winner from Manuel Lanzini.

Despite the difficulties that both West Ham and Tottenham have had to undergo at home recently, both go into Saturday’s clash with records to protect.

With a key target man in Carroll, West Ham have completed on average 38.6 long balls in their last two games; 12 more than their opening four games.

Whilst Wembley has been a stumbling block for Spurs, they have won their opening two away fixtures, including an impressive 3-0 win at Goodison Park thanks to a Harry Kane brace.

Due to the World Athletics Championships being held in London, it has been a long and overdue wait for West Ham to have the chance to open their 2017/18 Premier League account at the London Stadium, which came in their 2-0 win against surprise package Huddersfield Town. Albeit a short stint to say the least, West Ham will be looking to keep their 100% record at home come Saturday.

With the supposed ‘August hoodoo’ off of his back, Harry Kane can now focus on what he does best – scoring goals.

Whilst some are also questioning the striker after a slow start to the season, it must be understood that this is a clear pattern in his past record: Kane scored just two goals in the opening 10 Premier League games last season, before going on to win the golden boot.

His shooting numbers are promising: last season Kane averaged 3.7 shots per game and scored 29 goals in as many appearances. This season the Spurs striker is averaging an incredible 6.4 shots per game – dwarfing last season’s number – and if he can find his range like he did last season he should be battling for the golden boot once again.

Kane will be up against a team on Saturday with the joint worst defensive record in the league: conceding 10 goals in five games.

West Ham vs. Tottenham betting: A change in style

A change in fortune followed, with West Ham drawing and winning their last two games against West Brom and Huddersfield respectively. The biggest change comes in their defence, keeping two clean sheets in a row.

Their formation was not the only change. Their playing style has transformed from a side attempting to play between the lines and down the middle, to a side looking for dangerous crosses from out wide.

The change in style has coincided with the reintroduction of Andy Carroll; back after being sidelined for the start of the season.

Whilst Wembley has been a stumbling block for Spurs, they have won their opening two away fixtures, including an impressive 3-0 win at Goodison Park.

With a key target man in Carroll, West Ham have completed on average 38.6 long balls in their last two games; 12 more than their opening four games.

The Hammers have also increased their crossing; they averaged 32.5 attempted crosses across their last two games, 15 more than their opening four games.

If West Ham can get good quality balls to the box, then they will be favoured to win the aerial duels against Spurs; West Ham have won 20.6 ariel duels per game compared to Tottenham’s 14.8.

With the likes of Carroll attacking the crosses - along with possible gaps behind Spurs’ usual marauding fullbacks – then crosses from the wings could offer West Ham their best chances on Saturday.

West Ham vs. Tottenham odds: Where is the value?

Tottenham have averaged 21 shots per game this season, so although they have not quite hit their free-scoring best just yet, they are likely to notch on Saturday.

Their -1 handicap of 2.110* may offer value if Tottenham’s forward line can start turning their shots into goals.

Derbys can often be heated affairs, so cards betting could offer value in a game which has had 16 yellows and a red in the last three meetings.

Betting on cards can sometimes be overlooked by bettors, however can offer an alternative market in a game in which the scoreline may be more difficult to predict. 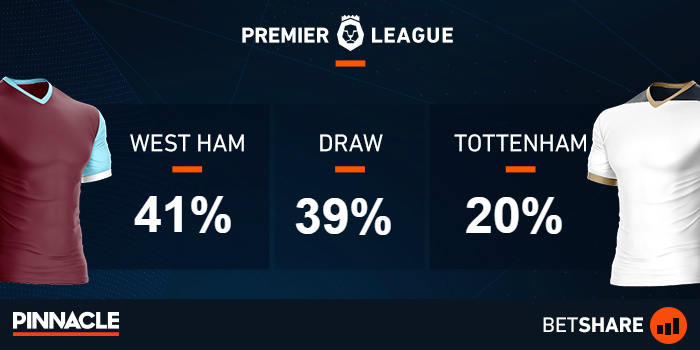 What is a BetShare? Learn how you can utlilise Pinnacle's Betshare information within your betting here.