Can Jurgen Klopp’s Liverpool show their top four credentials when they take on Tottenham this Sunday, with Mauricio Pochettino’s men looking to keep up with the two Manchester clubs at the top of the Premier League table? What value can be found in the Tottenham vs. Liverpool odds? Read on to find out.

Tottenham vs. Liverpool betting: Past meetings

Despite Tottenham coming above Liverpool in the last two Premier League campaigns, they have failed to beat them in the last six meetings, losing three.

Spurs’ home form is a cause for concern also. Before their win against Bournemouth last time out, Pochettino’s men hadn’t won at home in the league.

In fact, all of Harry Kane’s six goals this season have come away from their temporary home. Struggling at a new home is no new trend, with West Ham United showing recently how difficult it is to maintain performance in new surroundings.

Meanwhile, Liverpool’s record on the road has also been a problem for Jurgen Klopp’s men. Despite criticism of their defence, Liverpool have only conceded once at Anfield. However, their defensive record away is less impressive.

In just four games away from Anfield Liverpool have conceded 11 goals, including conceding more than two on two occasions. It should be noted however that their 5-0 loss to Manchester City with ten men put a large dent in Liverpool’s goal difference.

Both sides have a proven record of creating and scoring chances at a substantial rate. Therefore, the defences may be the separating factor in Sunday’s clash.

Tottenham have conceded just five goals in eight league games this season: only the two Manchester clubs have a better record.

Trippier has assisted half of Harry Kane’s six goals in the Premier League; only Azpilicueta to Morata has been a more potent partnership (four).

Meanwhile, Liverpool have conceded a worrying 12 goals in just eight games, and before their most recent clash with Manchester United had failed to keep a clean sheet in their last four. Couple this with their 42 goals conceded last season (the worst record in the top four) and the signs look worrying for Liverpool.

Their difficulties at the back have left goalkeeper Simon Mignolet exploited, averaging 2.29 saves per game. In comparison, Hugo Lloris has only averaged 1.13 saves per game, as Tottenham’s defence has kept the shots he has faced down to a minimum.

Whilst Hugo Lloris has a substantially stronger defence in front of him than Liverpool stopper Mignolet, there is still a clear difference between the two.

On average, Mignolet is only stopping 1.33 shots per goal he concedes. Whereas, Hugo Lloris is averaging 1.8 saves per game. Therefore, not only is Liverpool conceding fewer shots on their goal, but Mignolet is having difficulties with handling the shots faced.

This could be due to the fact that the majority of shots he faces are in close range. An incredible 14% of shots against Liverpool have been inside the six-yard box. In comparison, only 5% of shots Lloris has faced have been in the same area. The closer the shot is, often the more likely that the shot will find the net.

Tottenham vs. Liverpool betting: the importance of wing play

Both Tottenham and Liverpool rely on attacking wing play in order to churn out chances, but in rather different ways.

Tottenham play a back five, yet the fullbacks play almost as wingers when moving forward, leaving their post to maraud forward and join attacks.

An incredible 14% of shots against Liverpool have been inside the six-yard box.

With first-choice left-back Danny Rose sidelined for the start of the season, Ben Davies has taken his chance to make an impression on the starting lineup, having already notched two goals and two assists.

On the other side, despite missing the start of the season with an ankle injury, Kieran Trippier has been a vital cog in Spurs’ unbeaten September. Trippier has assisted half of Harry Kane’s six goals in the Premier League; only Azpilicueta to Morata has been a more potent partnership (four).

The importance of Tottenham’s fullbacks to provide width when going forward is critical, particularly due to the necessity to stretch the pitch and open up space to allow their impressive central ranks to cause damage. Against Liverpool however, this may cause concern for Mauricio Pochettino.

Jurgen Klopp may have the perfect foil to Tottenham’s wing play in the shape of Mohammed Salah. Salah has started the season in scintillating form, scoring four and assisting one. His biggest threat is his pace, which may be able to exploit gaps which Tottenham’s marauding fullbacks leave.

If Mo Salah can peg back Ben Davies and stop him from making forward runs through the fear of leaving gaps behind, then the space for Tottenham’s midfield talent may be in vain. Particularly on such a big pitch like Wembley’s, the width available for the likes of Mohammed Salah could cause Spurs’ defence some problems.

Unfortunately, Liverpool will not have the same foil on the other side of the pitch with Mane unavailable. However, whilst he doesn’t offer the same pacey wing play, Philipe Coutinho has started the season in similar sparkling form; netting two goals and assisting one in just four games.

Tottenham vs. Liverpool odds: Where is the value?

Whilst Tottenham have struggled at home, they are more in-form than Liverpool who have won just one of their last five. If Tottenham can exploit Liverpool’s defensive frailties, then -0.5 handicap odds of 2.120* could offer value.

Two of Liverpool’s three games against one of last season’s top six had over three goals. If both teams can utilise their attacking prowess, and Harry Kane can break his Wembley woes, then Over 3 goals odds of 2.200* could be a smart bet.

Find out who bettors think is the best bet ahead of Tottenham vs. Liverpool. 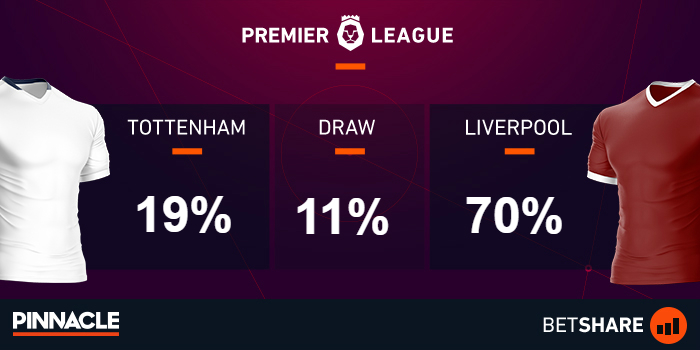