Even this side of Christmas, an eight-point gap (if Manchester City take all three points from the Hawthorns) off the top of the table could be too much for both Manchester United and Tottenham to close. Will either side get a win at Old Trafford this Saturday and keep up with the Citizens at the top of the Premier League table? What value can be found in the Manchester United vs. Tottenham odds? Read on to find out.

The superiority the ex-United manager saw in his side in comparison to the Tottenham of yesteryear was undeniable. The story was later recounted by Roy Keane in his autobiography, praising his manager for understanding his ability to see the difference in class between the two.

With Tottenham’s current squad, one would imagine that Mourinho’s team talk will hold a much different message.

Harry Kane is averaging a huge 6.3 shots per game this season, the highest in the Premier League.

Spurs’ recent rise from mid-table obscurity to a team consistently fighting for a top-four spot, if not the title is a credit to all at the club.

Meanwhile, United have been in rebuild since Sir Alex Ferguson’s retirement, only this season looking as though Premier League success is feasible since the manager’s departure.

Yet they have shown recently that there are chinks in their armour. United’s most recent performances have been below par and the loss against Huddersfield was on the horizon.

Some were quick to praise United after their draw against Liverpool, detailing the performance as a classic ‘Mourinho-like’ defensive display. This is not the case. They were lucky to come away with a point - based on expected goals statistics, a fair result would have been a 2-0 Liverpool win.

Can Manchester United bounce back from their recent poor performances and send a message to the rest of the league by beating a Spurs side that have looked as though they could challenge for the title once again? Or will Mourinho go for his ‘tried and tested’ big-game defensive approach that almost proved costly at Anfield?

Whilst United have looked below par recently, they can take solace in their ability to win aerial duels; a skill that may give them an edge on Saturday.

This season, Manchester United have scored six goals from set pieces, no other team has scored more in the Premier League. Meanwhile, Tottenham only win 15.4 aerial duels per game, the third lowest in the league.

The likes of Lukaku, Matic and Fellaini should be a cause for concern for Mauricio Pochettino. Set pieces could be United’s best chance of getting the vital goal to win the game, particularly seeing as Tottenham have only conceded four goals from open play this season.

Whilst United may have home field advantage, they may almost wish that the game was being played at Wembley, where Spurs’ record is worse than their imperious away form.

In fact, Tottenham are only one of two sides to win all of their away Premier League games this season, including convincing wins at Huddersfield (who most recently defeated Mourinho’s United ) and Everton.

Whilst Spurs’ away form has been a high note, Manchester United’s home form has been similarly impressive, winning all of their games at Old Trafford in the Premier League this season, winning by four goals in three of the four.

At least one of their winning records will go this Saturday. Will home field advantage play a part in Manchester United claiming all three points, or will Spurs’ current dominant form be a more important factor, with Spurs winning five of their last six in the league (drawing one)?

Saturday will see the Premier League’s current top two goalscorers face off, with Romelu Lukaku sitting just one behind Harry Kane’s tally of eight. Yet it may in fact be the help that the two are given that could be the biggest difference at Old Trafford.

Harry Kane is averaging a huge 6.3 shots per game this season, the highest in the Premier League. Whilst Lukaku is averaging a reputable 3.9, his recent average is in decline.

Manchester United have scored six goals from set pieces, no other team has scored more in the Premier League.

In his last two games Lukaku only had 1.5 shots per game - this includes his solitarity shot against Liverpool where his fellow attacking players focused on their defensive duties, leaving the Belgian powerhouse isolated.

At the start of the season, Lukaku’s shots per game average was closer to Kane’s current record, with five. The steady decline of chances offered to Luaku is worrying, in particular his low shot count against Liverpool. If Mourinho uses a similar defensive tactic against a Spurs side known for its strong defensive output, then chances for Lukaku could be limited.

Manchester United vs. Tottenham odds: Where is the value?

With Spurs’ current winning run and United’s recent struggles, Saturday may be the perfect time for Mauricio Pochettino’s men to make the long trip to Manchester.

Tottenham are handicapped at 0 and +0.5 at odds of 2.010*. Whilst it is likely to be a cagey affair and goals should be few and far between (Manchester United have conceded the joint-fewest and Tottenham have conceded the third fewest in the Premier League this season), Tottenham’s current form could see them return to North London with three points.

Whilst it may be a tight game, if Tottenham can grab a goal early on then Mourinho’s defensive style in big games will have to change. Over 2.5 odds of 2.060* could be a smart bet if Spurs can break down United’s defence early on, leaving United to open up their play.

Find out who bettors think is the best bet ahead of Manchester United vs. Tottenham. 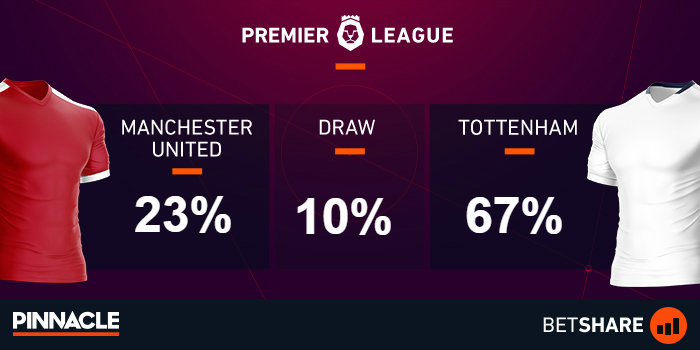