Jose Mourinho returns to Stamford Bridge this Sunday, hoping to keep tabs on Manchester City at the top of the EPL table. Can the Special One get all three points at his former club, or will Conte’s men begin to show their title aspirations? What value can be found in the Chelsea vs. Manchester United odds? Read on to find out.

There have been 14 Premier League titles since the start of the Abramovic era at Chelsea. Of those 14, 10 of them were won by either Chelsea or Manchester United (five each).

This season it is the blue side of Manchester that are favourites to win the title. Five points ahead going into game week 11, Manchester City’s unbeaten start has seen them create a cushion between them and the chasing pack.

Yet this weekend may just be the best chance for Chelsea and United to close that gap. Manchester City face an Arsenal side who look to be hitting some sort of form, as Mesut Ozil, Alexis Sanchez and Alexander Lacazette begin to weave a partnership.

If Manchester City drop points at the Etihad in the early kickoff, it is critical that Chelsea and Manchester United exploit the Citizens’ stumble.

This season, Fabregas has averaged 3.7 key passes per 90minutes, whilst Kante and Bakayoko have averaged just 1.4 and 0.7 respectively.

Despite Manchester United’s loss to Huddersfield, their record this season is the only in the league that can challenge City’s flawless start, and is arguably of title-winning formula; losing just one game so far in the Premier League.

Meanwhile, Chelsea have bounced back from a turbulent run of two losses in the league with wins against Bournemouth and an overperforming Watford which may have kept their title-winning hopes alive.

Although so early in the season, it is difficult to see Manchester City slipping up often. This weekend may be one of very few opportunities Conte and Mourinho have at putting pressure on Guardiola’s men.

Despite his success, Jose Mourinho has come under immense scrutiny over his most recent tactics against Tottenham and more viciously, Liverpool.

Yet four points from two difficult games show just how effective his pragmatic, defensive approach can be. But it was the versatility of his United side that was most impressive in their win against Spurs last weekend.

Normally adopting a back four, Mourinho instead mirrored Tottenham’s back three; a tactic that on the whole worked.

This season, 46% of Chelsea’s shots have come from outside the box, only Huddersfield have a higher percentage.

Mourinho did not abandon his tried and tested defensive formula which did come under scrutiny by the Old Trafford faithful; a reaction Mourinho certainly answered, bringing his finger to his lip to hush those who criticised as Martial slotted home the winner.

United have proved that they can play with three at the back and will likely look for a repeat at Stamford Bridge. Away from home, they will likely play similar to their very defensive display at Anfield, albeit with the alterations to the formation seen against Spurs to match Chelsea’s marauding fullbacks man-to-man.

Manchester United’s style of play will most likely be in reaction to how Conte sets up his team on Sunday; the most pressing of those decisions is the middle two.

Conte will most likely go with Kante and Bakayoko; two players who thrive of the defensive side of the midfield battle, in order to combat the robust styles of the likes of Fellaini and Matic.

However, the absence of a playmaker does play a role in the effectiveness of Chelsea’s attack, something that Fabregas can offer.

This season, 46% of Chelsea’s shots have come from outside the box, only Huddersfield have a higher percentage.

As a basic principle, this highlights Chelsea’s inability to break the defensive lines of the opposition in order to churn out scoring opportunities behind the opponents defence; something that Fabregas excels in.

This season, Fabregas has averaged 3.7 key passes per 90minutes, whilst Kante and Bakayoko have averaged just 1.4 and 0.7 respectively.

However, including Fabregas loses the defensive solidarity that Bakayoko offers; this season Bakayoko has averaged 3.7 tackles and 1.3 interceptions per 90, dwarfing Fabregas’ 2.5 and 0.4 respectively.

Does Conte play it safe this Sunday and rely on the defensive approach that both Kante and Bakayoko can offer, or do Chelsea take a risk and deploy Fabregas to break United’s back line with his undeniable passing ability?

Chelsea vs. Manchester United odds: Where is the value?

This Sunday feels like it could be a defining moment of the season; who will keep up with Manchester City and who will fall off the pace?

The game is likely to be a cagey affair with neither managers making too many risks. The two sides have one of the best defences in the Premier League this season, with Chelsea and Manchester United’s expected goals conceded per game being just 1.2 and 1.1 respectively.

Odds for under 2 and 2.5 goals of 1.869* may be the smart bet going into Sunday, with both defences coming out on top.

Whilst Chelsea have not hit the heights of their title-winning form of last season just yet, Eden Hazard looks to be hitting form at just the right moment and may have a big part to play on Sunday. Handicap odds for 0 and -0.5 of 2.150* may offer the best value in the Chelsea vs. Manchester United market, as Conte looks to take advantage of a United side who haven't hit the form they had at the start of the season.

Find out who bettors think is the best bet ahead of Chelsea vs. Manchester United. 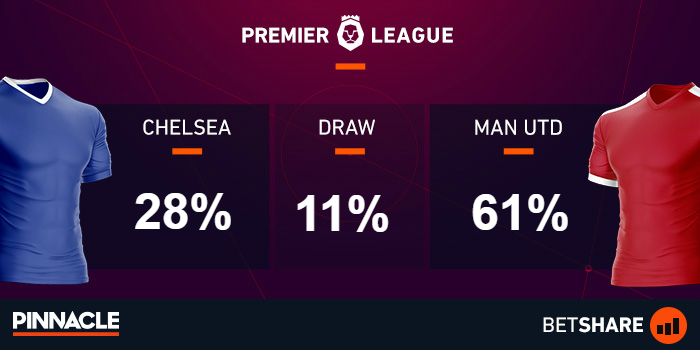