Two title challengers face off this Saturday as Manchester City look to extend their unbeaten Premier League record. They travel to Stamford bridge to meet a Chelsea side who have hit top form over the last few weeks. Can Antonio Conte’s blues stop Pep Guardiola’s free-scoring attacking threat? What value can be found in the Chelsea vs. Manchester City odds? Read on to find out.

The past does not favour The Citizens as they make the long trip to London this Saturday: no side has beaten Manchester City in the Premier League era more than Chelsea (24).

Yet it must be taken into account the incredible strides that Manchester City have taken over the past decade, as Sheik Mansour’s wealth fueled them into one of the most formidable powerhouses in English soccer.

Since the takeover, the gap between Chelsea and Manchester City has shrunk, with the last five meetings between the two just leaning in Chelsea’s favour (three Chelsea wins and two Manchester City wins).

This season, Pep Guardiola’s men have hit form early, being just one of two teams still unbeaten in the Premier League. In fact, Manchester City have won nine of their last 10 Premier League matches, spanning from their 5-0 home win against Crystal Palace in May.

Meanwhile, Antonio Conte’s men have gone unbeaten in the Premier League since their opening day hiccup against Burnley, and have won 10 of their last 12 Premier League matches - a record that stretches back to last April.

Chelsea vs. Manchester City odds: The importance of alternatives

The goalscoring talents of Chelsea and Manchester City have culminated in 33 goals in just 12 Premier League games this season. These incredible attacking heights could not have been met without the goals from the two in-form frontmen, Alvaro Morata and Sergio Aguero.

Alvaro Morata has settled quickly into life in London and joins Sergio Aguero and Romelu Lukaku at the top of the scoring charts with six goals. Unfortunately, Sergio Aguero will likely be absent from this weekend’s meet, as well as the upcoming Premier League games; a scenario that may play a big part in this seasons battle for the Golden Boot

Whilst Aguero’s absence is a massive blow for City, his surrounding strikeforce should still have enough to cause Chelsea’s defence problems.

Morata has scored 50% of Chelsea’s Premier League goals this season; their second highest goalscorer is full-back Alonso with just two. The dependence on Morata for goals should worry Antonio Conte, as both Willian and Pedro have notched just one goal between them.

For City, Gabriel Jesus, Raheem Sterling and Leroy Sane have all scored at least three league goals this season, sharing the burden of scoring with Sergio Aguero.

Chelsea led the league in counter-attacking goals (7) and only had an average possession of 54% during last season's title win.

Chelsea’s shot count does not bode well for the wingers either. Whilst Pedro and Willian have had 1.8 and 1.5 shots per game, the likes of De Bruyne, Sterling and Jesus are having 3.4, 3 and 2 per game respectively.

Eden Hazard’s slow integration back into the starting lineup should aid Chelsea’s goalscoring exploits, yet he has only recently returned from an ankle injury and has not started a Premier League game so far this season.

Whilst many are seeing Manchester City’s attacking threat blunted with the absence of Aguero, Guardiola’s men have much more firepower than just the diminutive Argentinian and could play a big role on Saturday.

Yet, despite many gripes regarding their back line, Manchester City have the joint best defensive record in the Premier League this season, conceding just two.

In fact, no team has quashed opposition attacks as effectively as Manchester City’s this season, with the opposing team mustering just 6.8 shots per game; the league’s best.

It could be argued that it is City’s possession-based play (their average of 64.7% possesion is the highest in the league) that makes it difficult for opposing teams to create attacks without constant access to the ball rather than their defensive strengths.

If this is the case, then Chelsea’s style of play could be the perfect foil against Guardiola’s free-flowing football.

Morata has scored 50% of Chelsea’s Premier League goals this season; their second highest goalscorer is full-back Alonso with two.

Chelsea have averaged just 52.5% possession in the Premier League this season, an incredibly low amount for a side currently sitting in third. Last season Chelsea led the league in counter-attacking goals (7) and only had an average possession of 54% during the title-winning season; their fast-paced style may in fact suit playing the possession-based Manchester City.

Antonio Conte’s men have proven that they do not need a wealth of possession in order to carve out goalscoring opportunities and could prove to be a real challenge for City’s defence.

Chelsea vs. Manchester City odds: Where is the value?

In the last five meetings between the two sides there have been 19 goals, with all meetings having at least two goals.

With this in mind and the attacking threat that both teams offer, odds for over 2.5 and 3 goals of 1.980* could offer real value in the Chelsea vs. Manchester City betting.

If you believe that Chelsea’s strikeforce can exploit possible weaknesses in Manchester City’s backline whilst keeping the plethora of attacking threats at bay, a handicap of 0 (priced at 2.120*) might appeal to bettors as a draw would result in a push and a returned stake (as opposed to a loss of stake in a 1X2 market.

Find out who our bettors think is the best bet ahead of Chelsea vs. Manchester City. 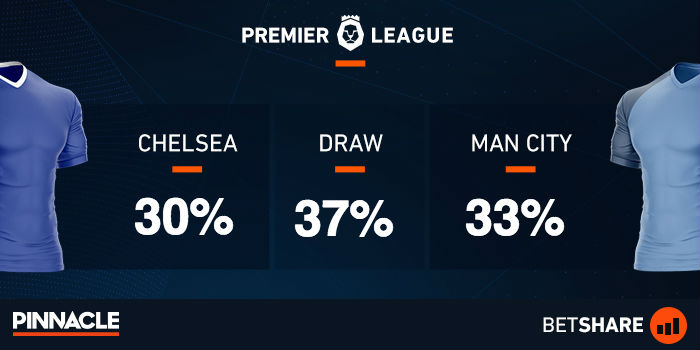