http://www.pinnacle.com/en/betting-articles/Soccer/epl-game-of-the-week-tottenham-man-city/7RJ2Y52TZ7LQ9GXF
With a four-point gap on the chasing pack, the Citizens are looking to continue their winning streak, but Spurs can narrow that margin to a single point when they take on the league leaders. Will Guardiola’s side make it seven wins from seven in the Premier League? Read on to find out.

The Premier League’s two undefeated sides go head-to-head at White Hart Lane on Sunday in what promises to be a pulsating end-to-end encounter between two managers eager to play attacking football. Mauricio Pochettino’s Spurs continue to look threatening despite Harry Kane’s absence, whilst Manchester City look capable of outscoring anyone.

There have been 36 goals across Spurs and Man City league games so far, an average of three per match.

Spurs and Man City have produced 17 goals in their last three meetings and a similar return seems likely this weekend, which makes the over 2.5 goals at 1.970* a valuable betting opportunity. There have been 36 goals across their combined league games so far, an average of three per match. Both sides have defensive flaws that the other can easily exploit.

Pep Guardiola’s tactical game-plan looked a little bit shaky against Swansea City. Wayne Routledge was afforded plenty of space on the wings when the home side looked to counter-attack, largely because Man City utilise such a high line.

Tottenham have added a real directness and dribbling speed this season, with Moussa Sissoko bombing down the right and Heung-Min Son – scorer of two goals last weekend – completing more dribbles than any other Premier League player this season. Spurs should be able to burst through City’s high line and score at least one on the break.

At the other end, Spurs’ use of extremely high full-backs inevitably leaves gaps on the flanks, where Raheem Sterling and Nolito will lurk dangerously. These two have been instructed to hug the touchline this season by Guardiola, which should lead to plenty of goals on Sunday.

Sergio Aguero’s magnificent form virtually guarantees that City will net at least once despite Kevin de Bruyne’s absence through injury. Both players have scored in five of the last six Man City league games. Expect plenty of action at both ends. 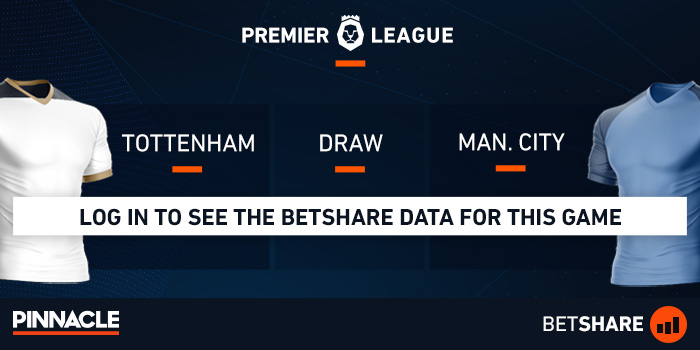 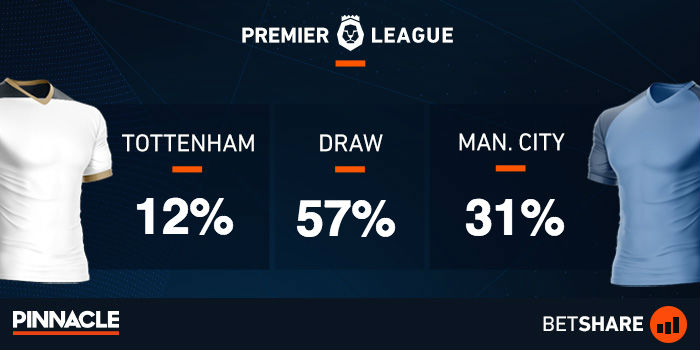