http://www.pinnacle.com/en/betting-articles/Soccer/epl-game-of-the-week-leicester-arsenal/QBC2STP6DKDQV8YE
Last weekend was the first time since 1953/54 that the top two from the previous season have lost their opening game. This week Leicester host Arsenal in the highlight match of the second round of fixtures. Who will get their first win of the current campaign when they meet at the King Power Stadium?

Arsenal’s third opening weekend defeat in four years has set the tone for yet another frustrating Premier League campaign, and although Leicester City also fell to defeat, optimism at the King Power Stadium remains high.

Claudio Ranieri’s team struggled against defensive opponents on the opening day, but their quick tempo counter-attacking football is likely to be much more effective against an injury-hit Arsenal.

Arsenal beat Leicester 5-2 and 2-1 last season and have never lost their first two games of the season under Wenger, however, rarely have they started a season so under-prepared.

Arsenal beat Leicester 5-2 and 2-1 last season and have never lost their first two games of the season under Wenger. However, rarely have they started a season so under-prepared. Laurent Koscielny, Mesut Ozil, and Olivier Giroud are all unlikely to regain match fitness in time to face the Foxes, whilst Aaron Ramsey and Alex Iwobi join five others on the injury table.

Leicester fans have good reasons to be optimistic. Rob Holding and Calum Chambers looked somewhat shambolic against Liverpool and seem unlikely to cope well with the blistering pace of Ahmed Musa and Jamie Vardy, whilst wingers Alex Oxlade-Chamberlain and Theo Walcott will struggle to get in behind Leicester’s deep-lying and disciplined full-backs.

Hull City successfully nullified Leicester’s counter-attacking threat by sitting deep, but Arsenal is not likely to follow suit. They rarely, if ever, adapt their tactical strategy and thus will look to dominate possession high up the pitch. Demarai Gray, Vardy, Riyad Mahrez and Musa could find plenty of space in behind.

Wenger’s stubbornness is increasingly a hindrance to Arsenal. Not only has a lack of new signings left them familiarly short on numbers, but also the defeat to Liverpool proved that he has become tactically inflexible. Leicester, having learned from their mistakes last season, is likely to sit deep, absorb pressure and use their pace to burst beyond this disjointed team.

Even though Leicester have not beaten Arsenal since 1994, currently priced at 2.95* the champions look like a good betting opportunity. With Pinnacle’s odds for Arsenal to win at 2.45* and the draw at 3.66*, are the Gunners set for another slip up?

Get the best Premier League odds for all opening matches at Pinnacle, the ultimate bookmaker with the lowest margin and highest limits. 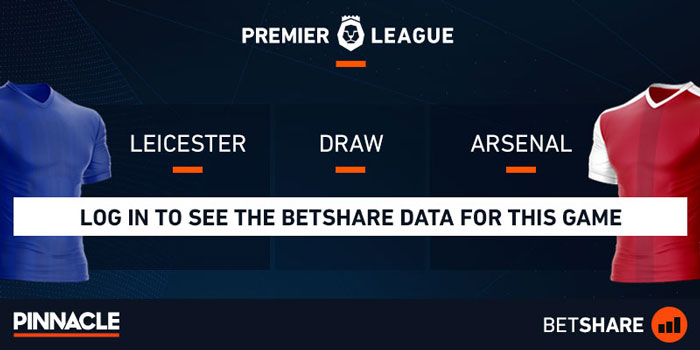