Much has been written in recent weeks about the impact that a loss of spectators is having on home advantage in soccer matches, with particular focus on the German Bundesliga. On June 15, Reuters published a piece quoting data from analytics company Gracenote that showed home win percentage in the German top division had fallen from 43% before the COVID-19 lockdown to just 21% in the 56 games after. The Bundesliga has now completed its season, and several other leagues have restarted with matches behind closed doors too, so this is a good time to look at how things have changed and whether a case can be made for the hypothesis.

Historically, home teams win almost twice as often as the away team, although there are divisional variations. Whilst there is evidence that this advantage has been slowly declining in recent years, home teams still win close to half of matches, while away teams win only a little over a quarter of the time.

In the German Bundesliga 2019/20 season, 83 games were played behind closed doors, with 29 resulting in a home win.

There are numerous published journal articles discussing the reasons why playing at home may be advantageous to the home team. A number of hypotheses have been proposed to account for home advantage. These include ground familiarity, travel fatigue on the away team, home fans providing social pressures faced by the home team and the impact of crowd noise on pressure on referees.

Evidence from same stadium derbies (which eliminate the first two influences) suggest that social pressure and referee bias in favour of the home team may be the biggest influences. With regards to referees, it is typically reported that home teams are penalised less in terms of fouls and bookings compared to away teams.

Whilst social pressure experienced by the home team players from their fans may be an influence, arguably this could provide a hindrance more than a benefit. Indeed, home team players may be more psychologically incentivised not to lose than away players, in an attempt to avoid letting their fans down.

All humans are predisposed to loss aversion, a psychological trait first identified by Amos Tversky and Daniel Kahneman in their research into behavioural economics. A similar finding has been observed in professional golf where, having accounted for put length, players are statistically more likely to save par (avoid a loss) than get a birdie (achieve a gain).

Evidence from the German Bundesliga

The German Bundesliga 2019/20 season has now finished, having restarted earlier than the other major European domestic leagues. In total, 83 games were played without spectators, including one before the start of the official national lockdown in Germany. Of these, 27 (32.5%) resulted in a home win. Evidently, there has been some mean regression since Reuters published their story.

Nevertheless, this figure is still well below the pre-COVID frequency, raising questions as to whether it is statistically significant. It would seem not, with a probability of 11% that the observed frequencies of home wins, draws and away wins of matches played behind closed doors would happen by chance, assuming home advantage was not impacted in any way and the observed frequencies of games before stadiums closed represented expectation.

This is not a statistically significant result. Grouping draws and away wins together as non-home wins lowers this probability to 5%. That might be enough to warrant mention in a journal paper, but it ultimately suggests that more data is required.

The German second tier, the 2. Bundesliga, restarted its season at the same time and tells a completely different picture. Of the 81 games played behind closed doors, 35 (43.2%) were home wins, compared to 41.3% for the pre-COVID matches. This would tend to suggest that the German top flight simply required more mean regression.

Increasing the sample with other leagues

A number of other major European leagues have now resumed their 2019/20 seasons, including the English Premier League and Championship, Italian Serie A and B, Spanish La Liga and La Liga 2 and the top division in Portugal, Turkey and Greece.

At the time of writing, 3,426 matches were played this season in all of these divisions plus the German Bundesliga and 2. Bundesliga. Of these, 2,924 were played with fans and 502 without. Aggregated home win frequencies for these two periods are 43.1% and 38.8% respectively.

This drop is not as noticeable as for the German top division alone, but with the increased sample size, it is still almost statistically significant (6%) at the weakest level. Nevertheless, as for the Bundesliga data, there is a lack of evidence to suggest that anything truly notable is occurring.

What other impacts does an absence of spectators have on soccer matches?

When looking at the match data in more detail, interesting observations arise. As previously noted, research has observed that a disproportionately lower number of fouls are committed by home sides. According to recent data, fouls given by referees against home teams increase from 13.4 in front of crowds to 14.3 without them.

Given my data, this would be expected to occur by chance once in approximately 250,000 times. Fouls committed by away teams are observed to increase by a little, but not a statistically significant amount. A highly significant increase was also observed in the 2. Bundesliga (12.1 fouls against home teams to 13.6 with a 1 in 1,000 ratio of this occurring by chance).

There are two other hugely significant changes that arise from the match data that have relevance for goal scoring. Firstly, the total shots attempted by the home side decreased from an average of 13.1 to 12.0. This drop could be expected by chance roughly once in every 350,000 times.

Conversely, there was effectively no change in the number of shots on goal by the away team. Although home teams in the 2. Bundesliga scored more goals on average without fans and hence won proportionally more games, their attempted shots per game did decrease significantly from 15.0 to 12.8, which would occur by chance just once every 10,000 times. From this small sample (81 games), it would appear that the teams in question were particularly lucky and/or proficient with their scoring.

Secondly, the number of corners earned by home teams dropped from an average of 5.62 to 5.00, a decrease with a 1 in 350,000 probability to occur randomly. Once more, there was hardly any change in away team corner counts.

How do these changes translate into goals scored? The average for home teams dropped from 1.48 to 1.38, with an approximate 5% probability that this would happen by chance. Of course, there is a considerable amount of luck involved in any element of goal scoring and the correlation between metrics such as corners or shots and goals will be weak.

However, given the strong significance in the decrease in corners and shots experienced by home teams, it is to be expected that as the number of matches behind closed doors increases, the drop in goals scored by home teams and hence the proportion of games they win will become more statistically significant. As the sample size increases, the strength of the signal to noise ration increases too.

Fewer goals and shots were among the observations Gracenote reported to Reuters about the German Bundesliga, but interestingly they also recorded more passes. Simon Gleave, Head of Sports Analysis at Gracenote, has suggested that “players may be subconsciously choosing to pass the ball rather than attempt plays which would normally get fans on their feet.” Others have commented that matches without fans lack intensity and have the ‘feel’ of a training match.

In terms of loss aversion, home team players in particular would now seem to be less troubled by the prospect of letting fans down and more inclined to indulge in the technical aspects of the game rather than more risk-led attacking.

Have the betting markets been affected by this?

Some people have remarked that the drop in home win percentage offers an opportunity for bettors to find value in the draw or away team if the markets haven’t yet caught up, although it seems this may not be the case. Having removed the margin from Pinnacle’s closing match odds, the average home win expectancy for pre-COVID games of 44.7% has dropped to 41.7% for post-COVID matches.

Whilst this is considerably higher than the actual home win frequency of 38.8%, it should be observed that home teams had already been underperforming relative to market expectations for the season up to the beginning of March.

It would seem that, random influences aside, Pinnacle has been aware of the impact the loss of fans has had on home teams or at least has quickly adjusted to the new reality this poses. As a result, they have calculated that the difference to home win probability is not huge.

Are league tables affected by behind closed doors matches?

Some commentators have observed that a change in the fortunes of home teams will have a notable impact on the final league table. In particular, they have insisted that Premier League clubs should not play matches at neutral grounds (which ultimately, they haven’t been) on a mistaken notion that home advantage wouldn’t disappear provided that teams were at least playing in their own stadiums.

Generally, league tables and final positions are not notably affected by behind closed doors matches.

Firstly, we’ve seen that whilst there clearly is a significant impact on some of the match metrics for home teams, this translates only into a weak influence on win probabilities. Perhaps more importantly, if home teams have lost some of their advantage, the corollary is that away teams have gained it.

To test the impact of removing home team advantage completely, I applied this to the full 2018/19 Premier League season and ran a Monte Carlo simulation analysing the expected league points and rankings based on Pinnacle’s closing odds. Expected match win probabilities were calculated first by removing the margin and then by assuming that the average home win, draw and away win expected probabilities were 36%, 28% and 36% respectively.

The output was essentially identical, within the boundaries of error, to a similar Monte Carlo simulation for which the home advantage remained. All 20 teams appeared in exactly the same positions with very similar points totals. They might have won fewer games at home, although this was offset by winning more matches away.

Certainly, it is true that the teams scheduled to play more games at home than away in the post-COVID season extension will be disadvantaged. However, considering that the average change in home win expectation is only about 3%, this is hardly a disadvantage likely to translate into any meaningful influence on the league table. Certainly, the spread betting firm Sporting Index didn’t believe so.

The image below compares their estimated finishing points totals for Premier League teams, firstly on March 14 (just before the season was suspended) and secondly on June 17 (just before it restarted). 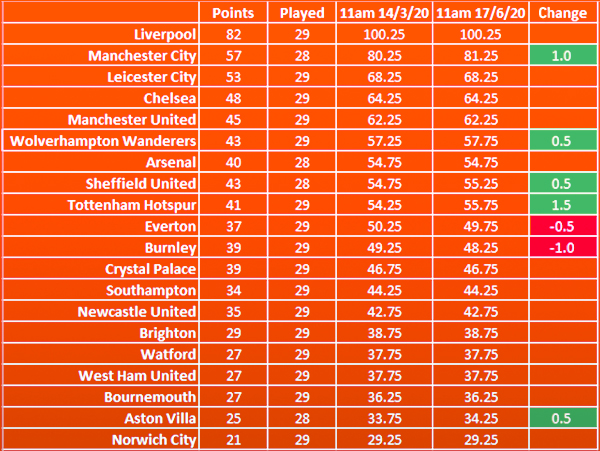 Conclusions: Does no spectators lead to a loss of home advantage?

The evidence from the resumption of domestic football leagues lends weight to the hypothesis that playing behind closed doors does negatively impact upon the home team. In particular, the referee awards more fouls against them and they have significantly fewer shots and corners.

However, this seems to translate into a weak impact on actually scoring goals and hence, win probabilities. Equally, some degree of home advantage still persists and whatever impact there might be, it seems likely that bookmakers, as with most things, are ahead of the curve.