Scottish Premiership champions Celtic went the whole 2016-17 league season unbeaten, winning 89.47 per cent of their games and blitzing the competition. Understandably, their Money Line odds have become extremely short as a result. Despite their dominance, however, there is still plenty of value to be found in Celtic’s superiority. Read on to find out more about Celtic betting.

When Ronny Deila guided Celtic to their fifth Scottish Premiership title in a row in 2015-16, outsiders could’ve been forgiven for thinking all was well at Celtic Park. Deila, though, was replaced by Brendan Rodgers the following summer. Celtic fans had wanted more and, under Rodgers, the club never looked back.

The table below demonstrates the Northern Irishman's impact through Celtic’s win probability (with Pinnacle’s margin removed) for selected matches in the 2015/16 and 2016/17 seasons:

As the data shows, the probability of Celtic winning these matches based on Pinnacle’s odds increased significantly in Rodgers’ first season compared to Deila’s last. In most cases, Celtic were deemed far likelier to win, with the odds notably shortening against Motherwell and Hamilton.

The table also demonstrates that Celtic’s odds actually lengthened against Ross County and stayed the same against Inverness, proving there are exceptions to the rule.

Rodgers began his quest by adding quality to Celtic’s ranks: his most notable signings were Scott Sinclair and Moussa Dembele, who registered 38 league goals between them. Bitter rivals Rangers were thumped 5-1 (twice) and Celtic drew just four league games. That means a double chance bet on the Hoops would have won 100% of the time in 2016-17.

Where Deila had lost four league games in each of his two years at Celtic Park, Rodgers’ undefeated league campaign shot the club’s win percentage up to 89.47%. In the previous five seasons, Celtic had ranged from a 68.42% win rate to 81.58%. Critics pointed to a lack of competition but the fact remains: under Rodgers, Celtic’s improvement was undeniable. 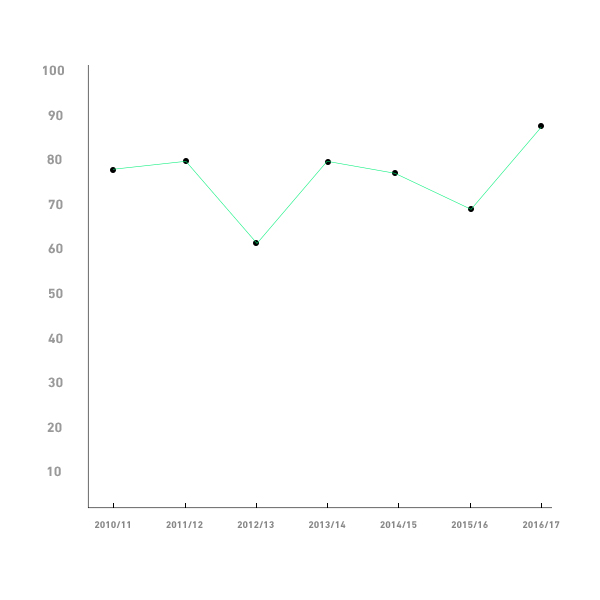 From a betting perspective, however, Celtic’s success isn’t ideal. While banking on them on the Money Line every week offers a likely win, short odds mean there is little value. Clearly, bookmakers are not going to ignore Celtic’s dominance.

This is where Pinnacle’s handicap betting comes in. Studying Celtic’s form from last season will stand bettors in good stead when analysing the handicap markets this term. It is only one campaign’s worth of sample size – but it is arguably the only one that matters (since it was Brendan Rodgers’ only previous year in charge).

Rodgers’ undefeated league campaign shot the club’s win percentage up to 89.47%. Critics pointed to a lack of competition but the fact remains: under Rodgers, Celtic’s improvement was undeniable.

Interestingly, 12/34 of Celtic’s wins came by a margin of just one goal (seven coming away from home). That is 31.5% of their 38 total league games. So, while 6-1, 5-0 and 5-1 hammerings caught the headlines, Rodgers’ men would have often fallen short of handicap bets, despite having favourable odds.

Of course, Celtic would have won by three or more goals in 36.84% of matches last term: certainly a sizeable figure. And yet it is important not to overrate this probability on the assumption that Celtic’s higher quality translates to heavy wins every match. Their most common individual margin was still a one-goal victory. Learn more with our soccer handicap betting guide.

Another prominent market Pinnacle offer on soccer betting is over/under totals. This relates to how many goals there will be in a match – or how many goals an individual team will score. An immediate statistic that jumps out here is the fact Celtic scored in every single league game last season. 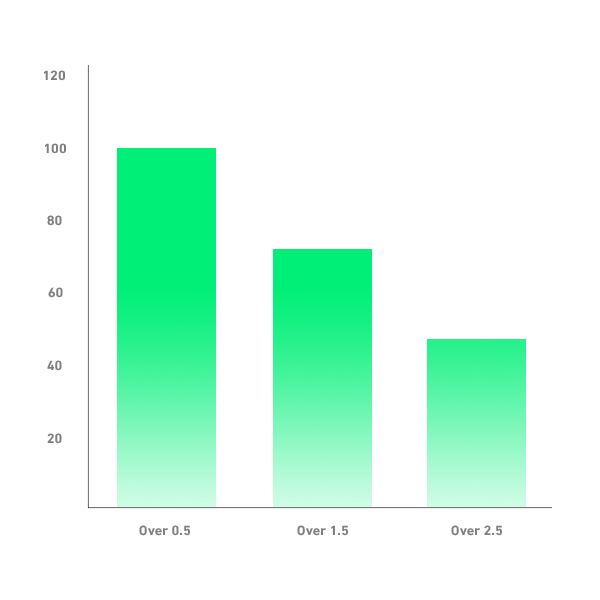 As can be seen in the above chart, Celtic scored over 0.5 goals 100% of the time. Rodgers’ men netted over 1.5 goals in 73.68% of their games and over 2.5 goals in 47.37%. Looking at Celtic’s opening four league games so far this season, a similar pattern has continued.

The above is certainly worth considering for bettors when searching for value with Celtic betting. Using the example of Celtic’s trip to Hamilton, they were priced at 1.21 on the Money Line but between 1.8 and 2.08 on the team totals market. Analysing opposition, whether Celtic are home or away and fatigue (if playing midweek) will help in this regard.

At Pinnacle, there is also the possibility of corner betting on Scottish Premiership matches. This allows you to bet on the number of corners in a match, or which team will win more corners. According to footcharts.co.uk, Celtic averaged 5.95 corners per game (less than Aberdeen and Rangers) last term. Remarkably, though, they conceded just 2.92 on average.

At the start of this season, the figures were again similar. Celtic won 11 corners and conceded three at Partick Thistle, won nine against Hearts, conceding five, and won five at Kilmarnock while conceding five.

In two of those scenarios, the Celtic handicap bet would have won but, against Kilmarnock, it would have been unsuccessful. For more information, see our guide on how to bet on corners.

Celtic betting: When will the unbeaten run end?

Celtic may have lost to Astana in the Champions League (still winning the tie on aggregate) but, domestically, their long-standing run looks considerably less likely to end. Rodgers’ men proved their grit and determination is as strong as ever against St Johnstone recently. Celtic were just 11 minutes from defeat – but a Callum McGregor equaliser kept the run in tact.

10% - Looking at the closing odds on Celtic either winning or drawing every game last season, the overall probability of them going the whole season unbeaten came to around one in 10

Statistically, we can work out Celtic’s chances of going unbeaten again this season - if we assume the odds for this campaign will be similar to those in 2016/17 - by looking at Pinnacle’s closing odds for every game last year. The closing odds (the odds of a match at the very last moment before it starts) can be considered the most accurate representation of the probability of the outcome.

Therefore, looking at the closing odds for Celtic either winning or drawing every game last season, the overall probability came to around one in 10. As most factors i.e. opposition, players, manager will stay the same this year, it is reasonable to apply the same probability this time around.

For those of you who believe Celtic overperformed last season, however, there is the obvious mathematical chance of mean reversion this term. If Celtic are to finally lose in the league, anyone backing their opponents faces a hefty payout due to the considerably high odds. The extremely difficult question to answer, though, is exactly when that will happen.

If you want to try and find value with Celtic betting, visit the best odds online at Pinnacle.