In this week’s highlight La Liga fixture, Barcelona host relegation candidates Levante, knowing that a win will guarantee them the La Liga title for another season. Comfortably beating Alaves 2-0 away midweek, will Barca face a tougher test this weekend? Read on to inform your Barcelona vs. Levante prediction.

A close look at the Barcelona vs. Levante odds 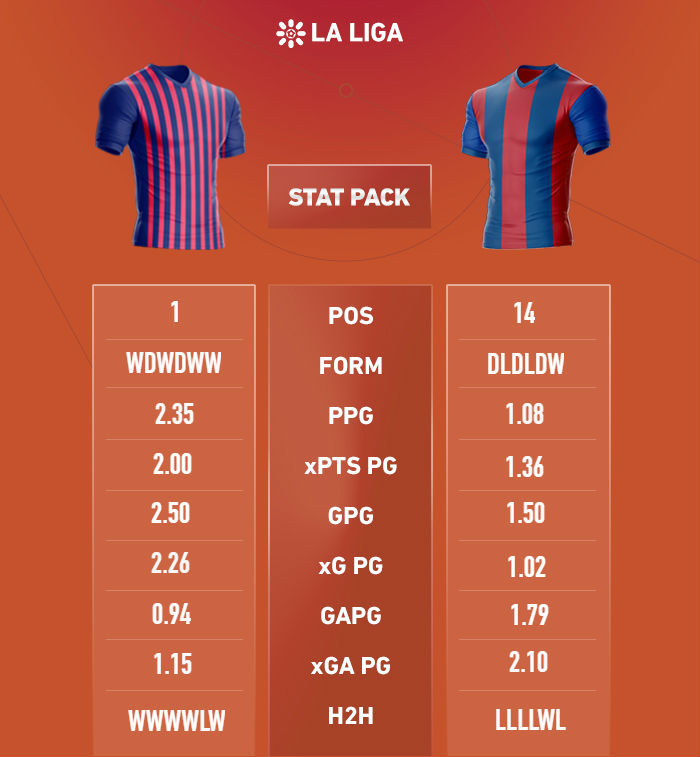 Barcelona will become La Liga champions on Saturday if any one of the following three scenarios happen:

Inform your Barcelona vs. Levante prediction

Given that Barcelona will may arrive to Saturday’s game having already been crowned champions, bettors should remember their team selection and even motivation to win the game may hinge greatly on the result of Atletico Madrid’s game against Real Valladolid.

Even if Barcelona require a result, or even a victory to claim the title, bettors should also bear in mind that this weekend’s game will be their second game of three in a little over the space of a week.

Comfortably beating Alaves away 2-0 on Tuesday night with goals from Carles Alena and Luis Suarez, manager Ernesto Valverde named a very strong squad for the game – with the likes of Pique, Coutinho and Busquets all starting, with Lionel Messi playing half an hour from the bench.

Looking ahead to next Wednesday, Barcelona will host Liverpool in the first leg of their Champions League semi-final tie – by all accounts a much higher priority fixture than the weekend.

Nine points ahead of second-placed Atletico Madrid with just four league games remaining – it would take a capitulation of epic and unprecedented proportions from Valverde’s men, as well as a spectacular run of form from Atletico, for Barca not to be crowned La Liga champions this season.

Interestingly, on the weekend before their second-leg quarter final at home to Manchester United, Barca played away to then-bottom of the table Huesca.

Nine points clear at the time as well, Valverde handed a La Liga debut to four players – with the likes of Messi, Suarez and Pique rested from the squad completely. Under-strength, Barca were held to a 0-0 draw in an uneventful 90 minutes.

Saturday’s game in many ways could hold far greater significance for Levante, who are currently engaged in a relegation battle.

With 37 points from 34 games, Granotas, as they’re also known, are just three points above 18th-placed Girona.

Beating sixth-placed Real Betis 4-0 at home on Wednesday night, thanks in part to a Jose Gomez Campana double, the win saw Levante end a run of nine La Liga games without a win – of which they drew four.

Having lost 5-0 away at Camp Nou back in December, Levante are actually one of only a handful of teams to have actually beaten Barcelona this season.

Drawing the European giants and La Liga champions in the Copa del Rey back in mid-January, Granotas actually beat Barca 2-1 in the first leg – before being beaten 3-0 away in the second leg.

Should they have any hope of securing a valuable result this Saturday to ease their relegation worries, that may well depend on earlier events - or whether Barcelona manager Ernesto Valverde already has one eye on his team’s Champions League semi-final clash.

Barcelona vs. Levante: Where is the value?

In recent seasons, this fixture has been very high-scoring with the last six La Liga meetings featuring 24 goals – an average of four goals a game.

However, with the potential absence of Lionel Messi and Luis Suarez, who between them have scored an incredible 54 La Liga goals this season – the market may be overestimating the amount of goals Barca could score, as many might assume the duo will have an automatic starting spot.

As a result, Under odds of 1.862* could hold potential value for bettors.