A close look at the Barcelona vs. Espanyol odds 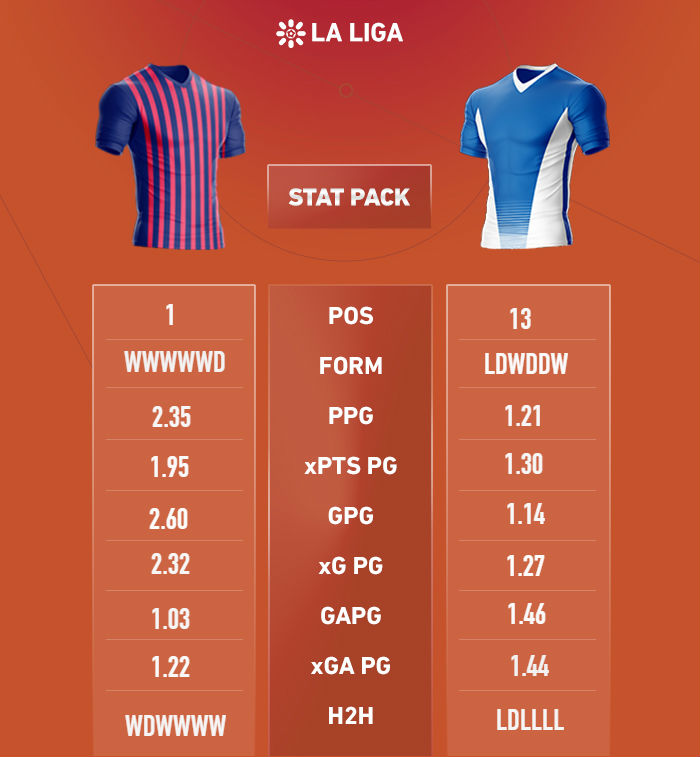 Inform your Barcelona vs. Espanyol prediction

Following the completion of the international break, Barcelona host local rivals Espanyol – knowing that a win will see them extend their lead at the top of La Liga to 13 points, for a few hours at least.

With Atletico, Barca’s closest challengers, not playing Alaves until Saturday evening - Ernesto Valverde and his men are heavily favoured to take another big step to what seems like an inevitable title win.

A sign of how indominable Barcelona have been this season, and indeed how much weaker their challengers have been in comparison to recent years, Barca have spent just four gameweeks outside first in La Liga this season.

With half of those aforementioned gameweeks coming in the opening two weeks of the season, Barca’s lowest position all campaign has been second.

Not a team to rest on their laurels, Barca are also the most in-form team in La Liga at the moment – with their last outing seeing a Lionel Messi hat-trick help them to a 4-1 away win at Real Betis.

Having won five and drawn just one of their last six La Liga games, the champions have scored 13 goals in that period – conceding just four times.

Looking at the season as a whole, Barcelona have won 20 of their 28 domestic ties this season, drawing six and losing just twice.

In stark contrast to their bitter rivals, Espanyol have endured another mediocre season and currently sit in thirteenth in Spain’s top division – the same position they finished last season in.

In terms of recent form, Espanyol have made only slight improvements of late – and are tenth in La Liga when looking at the last six games. Winning two, drawing three and losing once – they have scored seven and conceded five in that time.

Their last game before the international break was a 1-0 loss at home to seventh-placed Sevilla.

Unlike the El Clasico, or the Madrid derby, El derbi Barceloni is famously one-sided with Barcelona historically dominating the tie.

Thrashing Espanyol 4-0 in the reverse fixture back in early December, Barca haven’t lost to their city rivals in La Liga since February 2009.

However, Saturday’s tie may represent a good opportunity for Espanyol to finally get one over their neighbours – should Lionel Messi and Luis Suarez miss out on the game through injury.

While both players have returned to training, Messi aggravated a muscle problem in Argentina’s 3-1 defeat to Venezuela in Madrid on Friday – which forced him to miss Tuesday’s game versus Morocco.

Meanwhile Suarez, who has trained alone in recent days, is still recovering from a knock he picked up in Barca’s 4-1 win at Real Betis – and was expected to be out for at least two weeks.

As the two highest scorers in La Liga, Messi has 29 goals and 12 assists in 26 games – with Suarez scoring 18 goals in 27 games and also six assists.

Barcelona vs. Espanyol: Where is the value?

When comparing both historical data and recent form, it’s not hard to see why Barcelona are strongly tipped as favourites for Saturday’s game.

As a result, bettors may not find value in the 1X2 odds of 1.183* and so should look to alternative markets.

An assumption most bettors make is that by virtue of the game being a derby, the average number of cards shown should increase due to high levels of passion and intensity amongst the players.

However, recent fixtures between the two sides have been relatively tame in recent meetings – with Barcelona receiving just 50 yellow cards all season, the lowest of any team.

Given their recent form, and a chance both Messi and Suarez will start Saturday’s fixture, then Over odds of 1.980* may also appeal.