This week’s highlight La Liga game sees first meet second, as La Liga leaders Barcelona host Atletico Madrid. Eight points clear at the top, Barcelona have faced little in the form of a title challenge this season – so they will expect a win this Saturday. Looking for value in the game? Read on for some expert insight to inform your Barcelona vs. Atletico Madrid prediction.

A close look at the Barcelona odds vs. Atletico Madrid 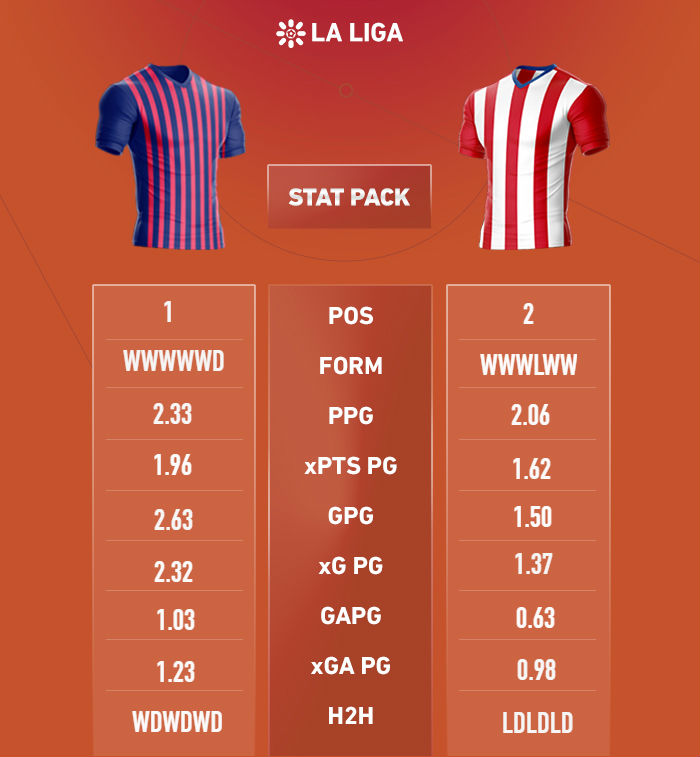 Eight points clear at the top of the table, Saturday’s game could be the defining clash of the 2018/19 La Liga season.

Should Barcelona record a victory, or at the very least not lose, then only an uncharacteristic capitulation of epic and unprecedented proportions would prevent them from retaining the title.

Having struggled to maintain any sort of serious title challenge for the majority of the season, Saturday’s clash is the last feasible chance Atletico have of gaining ground on a rampant Barcelona – who have spent just four gameweeks outside the top spot.

With half of those aforementioned gameweeks coming in the opening first four weeks of the season, Barca’s lowest position all campaign has been second.

Eliminated by Juventus in the Champions League, and by Girona in the Copa del Rey, La Liga is Atletico’s last chance, albeit a very slim one, to win a trophy this season – leaving aside their Super Cup success in August.

In an unusual occurrence for La Liga, all teams were in domestic action midweek – with Barcelona and Atletico both playing on Tuesday evening.

Playing away to relegation candidates Villarreal, Barca played out a 4-4 thriller in one of the games of the season.

Naming Lionel Messi, Gerard Pique, and Ivan Rakitic on the bench, Barca went 2-0 up thanks to goals from Philippe Coutinho and Malcom and were initially cruising.

Villarreal then mounted an amazing comeback and found themselves 4-2 with ten minutes to go – as Barca struggled to keep pace with the likes of Samuel Chukwueze and Karl Toko Ekambi.

A red card to Villarreal defender Alvaro Gonzalez four minutes from time, however, was to prove a catalyst for Barcelona – as a Lionel Messi free kick, his sixth in La Liga this season, and a Luis Suarez goal deep into injury time saw them salvage a dramatic point.

For Atletico, two goals in the last ten minutes of the game, saw them beat a mid-table Girona – with a VAR-reviewed header from Diego Godin and an Antoine Griezmann chip helping them to all three points. Griezmann ended a run of seven games without a goal.

The victory, however, may well have been marred by a late injury sustained by forward Alvaro Morata.

Overall, both games served as general examples of Barca and Atletico’s differing styles of play.

The brilliance of Messi and Suarez helped Barca blitz Villarreal, though their attacking onslaught left them susceptible at the back, while Atletico’s defensive mindset and counter-attacking options ensured they kept things tight at the back long enough to pick Girona off later on.

Drawing 1-1 in the reverse fixture back in November in a disappointing game for the spectator, just one point stood between the sides at that point in the season.

This time, however, the game represents a must-win for Diego Simeone’s men and the Argentine has stated his side is targeting nothing less than a win.

While Barcelona might already have one eye on next week’s Champions quarter final tie away at Manchester United – the Catalans know that a poor performance on Saturday could see them competing in a title race for the first time in months.

Barcelona vs. Atletico Madrid: Where is the value?

Despite Barcelona’s tendency to score plenty of goals, in recent seasons Atletico’s disciplined defence has prevented the league leaders from gaining any sort of a commanding lead in games between the two sides.

In the last five La Liga games between Barcelona and Atletico, there have been just 10 goals scored – an average of two per game, compared to the current La Liga average of 2.56.

More still, not one game of the six was settled by more than one goal – a sign of how competitive the fixture has become in recent seasons.

As a result, Under odds of 1.970* may appeal to bettors – as the market could overestimate the amount of goals Barcelona could potentially score. While Barca have scored 14 goals in their last five La Liga games, an average of 2.8 per game, historical data and an analysis of Atletico’s defensive nature show that Under is justified.