A close look at the Arsenal vs. Manchester United odds

With home advantage, the 1X2 odds make Arsenal favourites at 2.370* to beat Manchester United. The implied probability of a win for Unai Emery’s side is around 40%, and with the Gunners impressive home record this could be a value bet.

The Over/Under is set at 2.5 and 3 which means the betting market is expecting goals with Over 2.5 and 3 Goals currently priced at 1.854. These two teams’ statistics this season highlight that there is potentially value betting on the over in this fixture.

Lucas Torriera is suspended so will not be available, which should mean that Matteo Guendouzi will step in to take the Uruguayan international’s place in the midfield.

Alexis Sanchez is set to miss the game with Arsenal after being ruled out for up to eight weeks with a knee injury.

Juan Mata was hurt in Man United’s 0-0 draw with Liverpool and is also set to miss the match. 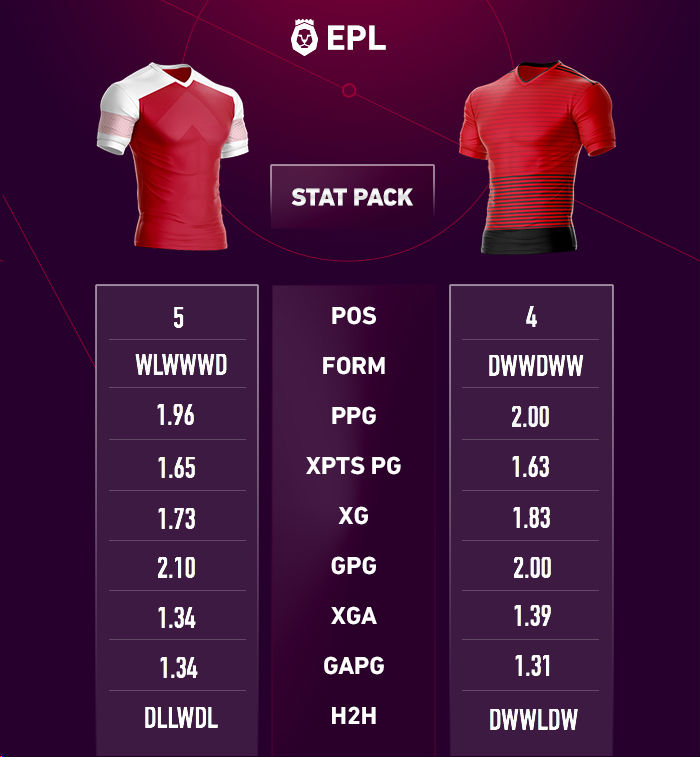 Arsenal head into this fixture off the back of an inspiring performance against Tottenham and are in good form in the Premier League. The Gunners will be looking to claim all three points on Sunday to leapfrog United in the table and edge closer to a top four finish.

Arsenal are unbeaten in their last 14 Premier League home games, winning 12 and drawing two, and winning each of the last eight in a row. This highlights how impressive Unai Emery’s side are when they have home advantage.

The London club were tactically well-organised and defensively strong in Saturday's north London derby against Tottenham and there is a sense that, with Emery now in charge, his game plans and tactics seem to be having a positive affect and are beginning to work when facing stronger opposition: the Gunners have already taken nine points from ‘top six’ opposition this season, compared to just six the whole season before.

The arrival of Ole Gunnar Solskjaer has seen Manchester United totally turn their fortunes around, and they will come into the fixture off the back of another victory, beating Southampton 3-2 at Old Trafford, to extend their record in the Premier League to ten wins and two draws from their last 12 matches.

It is worth bettors noting that United have over-performed since Solskjaer took charge. While this level of over-performance is unmaintainable over a longer period of the season, their underlying stats are impressive, with averages of 1.83 xGF and 1.39 xGA, so they should continue getting positive results as the season reaches the final stretch.

No teams have been scoring and conceding in the Premier League more than Arsenal and Manchester United recently, so bettors should expect plenty of chances at both ends when the two sides meet this weekend.

Tottenham vs. Arsenal betting: Where is the value?

Arsenal have won their last eight consecutive Premier League matches at Emirates Stadium. Only Manchester City have picked up more points at home than the Gunners with a tally of 35, so backing the home side at odds of 2.350* seems a sensible bet.

It is also worth bettors noting that between the two sides they have accumulated a total of 111 cards this season in the Premier League in 29 matches – an average of over three per game – so if bettors are looking for other alternative markets then cards betting is one to consider.

Throughout the Premier League season, you can find value in corners betting, betting on cards or use an expected goals model to inform your betting.