Showcasing some of the best underdog stories in recent memory, our Against the Odds series delves into some of the greatest sporting achievements from a betting perspective. This article looks back to Leicester City’s incredible title winning campaign of 2015/16.

Expectations at the start of the season

After narrowly avoiding relegation by six points the season before, Leicester City came into the 2015/16 season widely expected to at most secure a midtable to top half finish and at least avoid relegation. 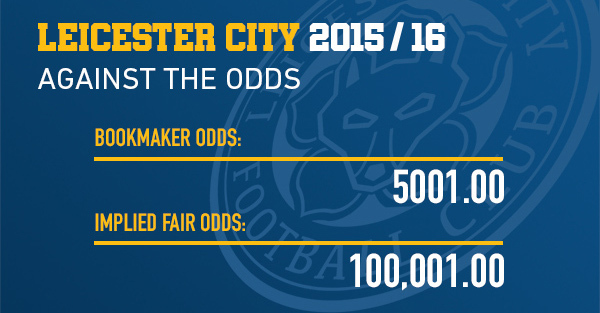 Their odds to win the Premier League reflected this, with 5000.00 being offered around by plenty of bookmakers. In actual fact, their implied fair odds were 100,001.00 showing just how unfavoured the Foxes were at the start of the season.

This is what Pinnacle’s outright Premier League odds for the 2015/16 looked like.

Pinnacle didn’t even list Leicester amongst their outright Premier League winner odds, as they considered their chances so remote it wouldn’t be needed as an option.

However, Leicester did feature with Pinnacle in another market – relegation. Plenty of bettors took the price of 3.54 for Claudio Rainieri’s side to finish in the bottom three of the Premier League table and with sound reasoning.

After narrowly avoiding relegation the season before under Nigel Pearson, a club scandal led to his departure and the appointment of Ranieri – who himself had just come off the back of an unsuccessful stint with the Greek national team.

Ex-Leicester player and supporter Gary Lineker, along with plenty of other pundits, were bemused by the appointment and did not think Ranieri was a shrewd choice.

All change after the first half of the season

Leicester made an incredible start to the 2015/16 Premier League season and eventually accumulated 11 wins, five draws and just two losses in 18 games – leaving them top of the Premier League table with 38 points (two points less than what they accumulated in 38 games the season before).

Eventual Golden Boot winner Jamie Vardy broke Ruud van Nistlerooy’s Premier League record by scoring in 11 consecutive games between August and November – simultaneously propelling his side up the table and slashing away at the pre-season title winning odds of his team.

Vardy, the team’s chief striker and midfielders Riyad Mahrez and N’Golo Kante were the three lynchpins of their title winning team. With Vardy leading the scoring charts, Mahrez was the team’s chief provider, accumulating 17 assists and chipping in with 11 goals, that would see him win PFA Players’ Player of the Year award that year.

Defensively, N’Golo Kante ball recoveries and dynamism in midfield gave Leicester balance and enabled them to perfectly execute their fast counter attacking style that unlocked many a defence during the course of the season.

The pivotal month of February

In what became arguably the most defining month in Leicester’s incredible title run, the Foxes’ matches against Liverpool, Arsenal,Manchester City and Norwich would go onto to shape the remainder of their season.

Having picked up a stunning 2-0 win over Liverpool which featured an incredible 20-yard half volley from Jamie Vardy to send them three points clear at the top of the table, the Foxes travelled to the Etihad to face Manchester City.

From pre-season title winning odds of 5000.00, Leicester were now at 2.93 to win the title heading into the match.

Pinnacle’s odds only gave Leicester a 16% chance (odds of 6.21) to take all three points in this crucial clash. Leicester would go onto upset the odds again with a commanding 3-1 away win featuring a brilliant Riyad Mahrez goal to seal the victory.

Their strength of character was tested following the win against Manchester City, as they suffered an agonising last second defeat against title rivals Arsenal in the game that followed.

Many believed this would see the Leicester title charge begin to decline, but they bounced back the following game against Norwich with a Leonardo Ulloa winner in the 89th minute sending them five points clear of rivals Tottenham and Arsenal.

The end of an unforgettable Premier League campaign

Following their pivotal February, Leicester would go the remainder of their season unbeaten and headed in Gameweek 35 with odds of 1.487 to win the title. The comprehensive 4-0 win against Swansea and Spurs’ failure to claim three points against Chelsea would see Leicester crowned Premier League champions for the first time in their history.

It truly was one of the most remarkable Premier League seasons in living memory and one of the greatest sporting underdog stories in not just soccer history, but in sport as a whole.

Gianluca studied Journalism (BA Hons) at The University of Sussex before joining the team. He has a keen interest in European soccer as well as Formula 1, Basketball and other sports that catch his attention. His journalistic background helps in writing articles that cut straight to the point whilst offering as much valuable information as possible.