This week’s highlight fixture in Serie A is the Derby della Madonnina, as AC play Inter Milan. Looking for value in what is sure to be a compelling contest between two fierce rivals battling for a Champions League place? Read on to inform your AC Milan vs. Inter Milan prediction.

AC Milan come into the match as slight favourites (around 39% chance) against an Inter Milan side that are capable of getting another positive result against their hometown rivals. The Over/Under market marginally points towards a low-scoring contest with under 2 and 2.5 currently priced at 1.925*.

Lucas Biglia made his return from injury last time out against Chievo, but with a lack of match fitness, the Argentine could be dropped for Tiemoue Bakayoko. Christian Zapata and Giacomo Bonaventura remained side-lined through injury whilst Diego Laxalt and Davide Calabria will be looking to displace Rodriguez and Conti in the full back areas.

Inter are having to deal with a number of injuries, with Radja Nainggolan, Miranda, Marcelo Brozovic and Sime Vrsaljko all dealing with separate issues as well as the ongoing internal dispute with Mauro Icardi.

Ivan Perisic should return to the side out wide whilst Andrea Ranocchia could deputise should Milan Skriniar not be fully fit. Antonio Candreva, Danilo D’Ambrosio and Keita Balde will also be battling for a first team spot. 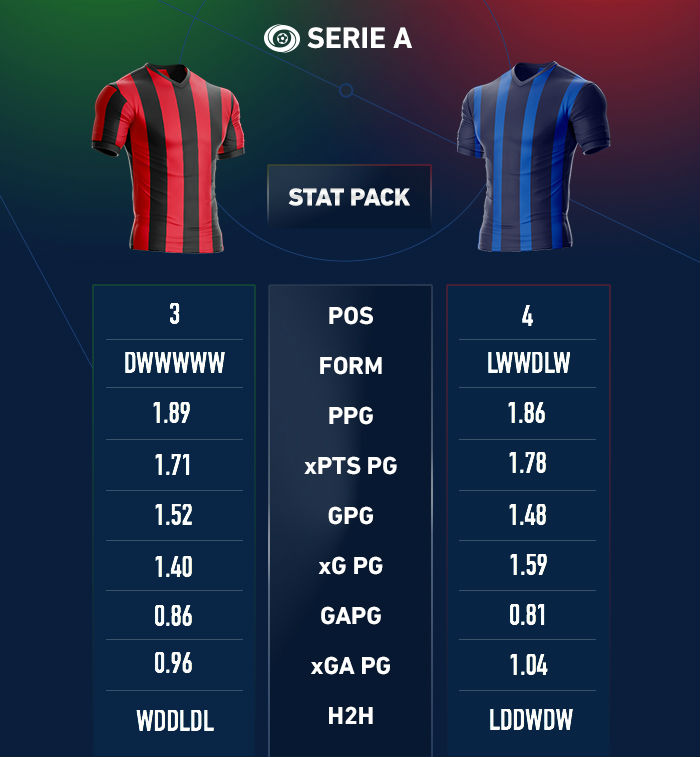 AC Milan vs. Inter Milan, known as the Derby della Madonnia, is one of the most iconic matches in soccer history and this weekend’s clash is sure to be another intriguing chapter in this storied rivalry between the two Milanese clubs.

Home field advantage is an intriguing concept when applied to this particular fixture, as both teams play their home games at the San Siro, but as AC Milan are the home team, they will have a greater allocation of supporters as a home team would in regular circumstances.

AC Milan have the momentum heading into the derby and will be looking to beat Inter for the first time in the league since January 2016.

AC Milan arrive at the San Siro in tremendous form, unbeaten in their last ten Serie A matches, winning the last five in a row to find themselves in third place – one point ahead of their hometown rivals and opponents Inter Milan in fourth.

The form of January signing Krzystof Piatek has propelled AC Milan into the top three, scoring six goals in seven Serie A matches to add to the 13 goals he scored with Genoa.

Piatek currently sits in joint second for the Capocannoniere award with Ronaldo with both players on 19 goals – one behind veteran Italian striker Fabio Quagliarella who leads the way with 20.

Inter meanwhile come into the match in mixed form, winning, drawing and losing in their last three games. The ongoing dispute with top scorer Mauro Icardi has meant that Lautaro Martinez has been playing in his absence but has only managed one goal in his last four starts and just five in 20 appearances in Serie A for the Nerazzurri.

The absence of Icardi in this fixture could be pivotal in deciding the outcome, as the former Inter captain has five goals in 10 Milan derbies including scoring the winner in two out of the last three games against AC Milan.

Both teams have performed very similarly across the season as a whole thus far, with AC Milan scoring one more but Inter conceding one less across 27 games – highlighting how close a contest it could be this weekend.

AC Milan have the momentum heading into the derby and will be looking to beat Inter for the first time in the league since January 2016. Inter on the other hand will be hoping their recent history in this fixture will help them secure a positive result, as they know a loss could open the door for the chasing pack behind them to make ground.

AC Milan vs. Inter Milan: Where is the value?

The recent history of this fixture indicates it could be a high scoring contest, with Over 2.5 goals in three of the last five matches between the two teams and given Inter’s form and their defensive injuries, bettors may opt to back Over 2.75 at 2.550* currently.

Should bettors choose to back the home side given their run of form, AC Milan are currently priced at 2.480* on the Handicap market at -0.5.

For bettors looking for an alternative market, perhaps value can be found in predicting the number of cards.

As it’s a derby fixture, the common assumption to make would be an increase in the number of yellow cards due to the intensity and passion running high amongst the players.

However, the two teams have the fifth and seventh best disciplinary record in the Serie A.