http://www.pinnacle.com/en/betting-articles/Pinnacle-Puzzle/wisdom-of-the-crowd-in-betting/2QN2WAPK8L735KXB
From the financial markets to sports betting, when it comes to making predictions, the idea that a group’s collective judgment tends to outperform that of an expert individual is well established. In an attempt to test the collective wisdom of Pinnacle’ players, we invited them to participate in a puzzle for the chance to win cash prizes. How well would you do?

One of the earlier examples of the “Wisdom of the Crowd” phenomenon dates back to 1906, when English polymath Francis Galton asked 800 people to guess the weight of a slaughtered ox. In his surprise, the average of the guesses turned out to deviate only 1% from the true weight, bringing forward the idea that large groups of people are smarter than an elite few.

In 2014 we decided to test the “Wisdom of the Crowd” theory by inviting our players to guess the number of chocolate balls in the video below.

To spice competition up, we added a twist though. The first three correct answers submitted would win $100 plus a Pinnacle goodie bag, while the next five would only win a Pinnacle’ hoodie.

To help maximize the chances of winning, we published a daily mean of guesses submitted. The entrants were therefore faced with the dilemma of choosing between first-mover advantage with minimal information and the advantages of utilizing the guesses of other participants but with reduced returns.

Below is the mean guesses table updated on a daily basis for the duration of the competition:

We received a total of 608 valid entries of which only one guessed the correct number 636. The actual range of guesses was from as low as 10 and as high as 7436.

As you’ll see from our graphic the first day’s mean guess was 752, but by day three this had moved to within just 1% of the actual answer, and never strayed beyond 11% from it. 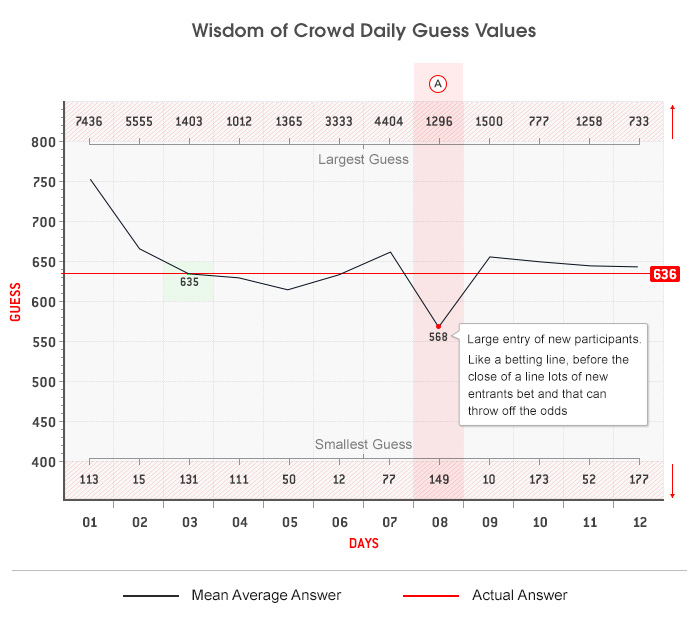 The process wasn’t linear, as the mean moved towards as well as away from the true answer. On day eight we sent a follow-up competition email, which produced a surge in new market entrants, moving the mean further away from 636, but by day nine it was back within 10%.

What is particularly interesting is that only 26.8% of entrants guessed within the range of the daily mean. Had more participants followed the Wisdom of the Crowd they would have increased their chances of getting the right answer, and also improved the overall accuracy of the collective.

The way in which betting markets work is very similar to this puzzle. A market starts with the assessments of a few participants, first and foremost bookmakers themselves. This is often called a tissue price, corresponding to the early assessment in our experiment. At this stage the value can be greatest because the market is immature.

As more participants enter the market, the collective assessment tends to become more accurate, but then the potential value is also squeezed out. As with our example, however, accuracy doesn’t always improve in direct correlation to participants. The crowd can get things wrong, such as favourites often receiving a lot of action from casual bettors close to kick off.

Read our article Wisdom of the Crowd applied to betting to find out what happens when Crowds act like herds!